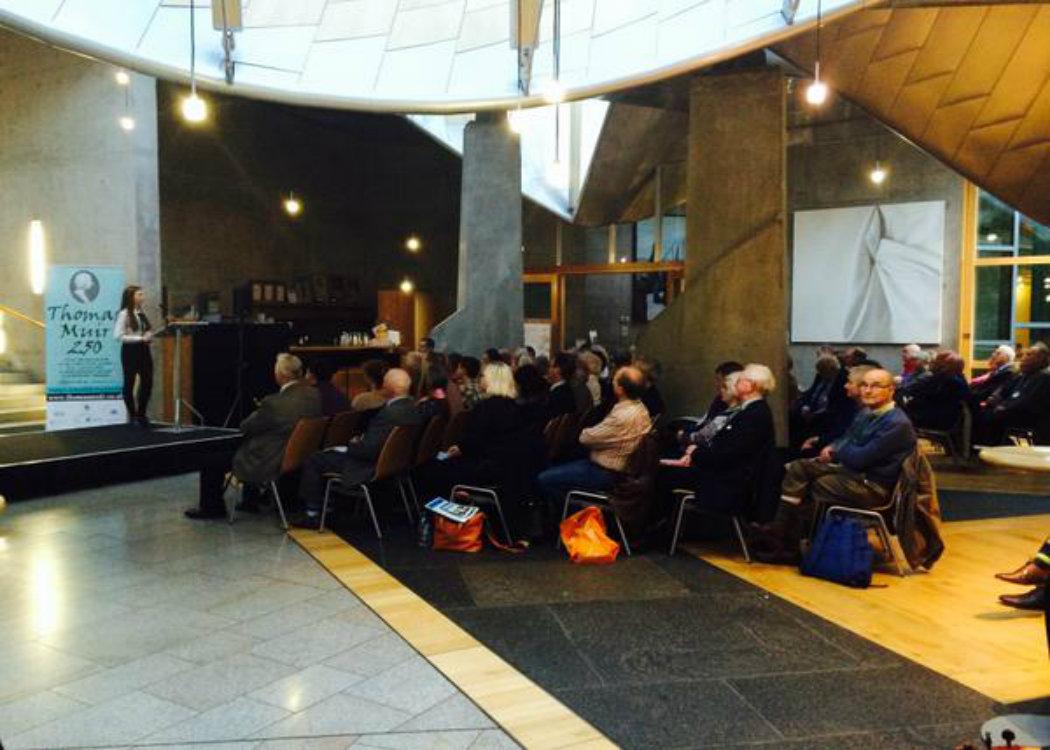 “I HAVE devoted myself to the cause of the people. It is a good cause – it shall ultimately prevail – it shall finally triumph.”

These words, spoken by Thomas Muir in the Court of Judiciary on the 30th of August 1793 epitomise the aspirations, the determination and the faith of Thomas Muir. Today, as we commemorate the 250th anniversary of his birth, these words, inscribed upon The Martyrs Monument here in Edinburgh, remain unchanged in their truth and power.

Ladies and Gentlemen, the world as we see it today is drastically different to that which Muir experienced a quarter of a millennium ago. However, it is one particular similarity that makes the plight of Thomas Muir so relevant today: even now, when we take democracy for granted and stand in this parliament which embraces the public voice, we still face the problems of disenfranchisement and disengagement in areas of the world.

Why? Are we not endeavouring to engage the people in exercising their right to vote, which so many before them have suffered for?

Thomas Muir was one of these suffrage heros. Exiled, a fugitive, an unconventional explorer, Muir was a political evolutionist. Despite finally settling in France which he finally considered to be his true home, Thomas Muir made a phenomenal impact here in Scotland.

However, perhaps Muir did not, in fact, lead, or win, or bring about any specific change but simply pointed in the direction of travel. His greatness was not what he achieved but what he aspired towards. His was a voice of hope, a clear vision of what could and should be achieved.

It is this, I believe, that is Muir’s greatest gift to us: his legacy, he made himself a hero. A hero whose words are listened to, whose words inspire, and whose words give us the aspiration, the determination and the faith that we need to carry on his legacy.

Perhaps most importantly, I believe his story of exile and ambition speaks to our young people. His words and beliefs live on, resonating for this generation, ensuring that we know we need not be the generation of disenfranchisement and disengagement, but the generation of change.

When tried in court, Thomas Muir concluded by saying: Nothing can deprive me of the recollection of the past; nothing can destroy my inward peace of mind, arising from the remembrance of having discharged my duty.

When tried in court, Thomas Muir concluded by saying: Nothing can deprive me of the recollection of the past; nothing can destroy my inward peace of mind, arising from the remembrance of having discharged my duty.

Thomas Muir did his duty. Along with a long line of others: John Maclean, the revolutionary socialist with whom Muir shares his birth-day; Flora Drummond, the formidable suffragette; Mary Barbour who David Hume, a philosopher of the Scottish Enlightenment, who was announced to be a heretic. All of these Scots, and many more, did their duty.

Not only did they push ever forward in the search for truth and justice in a world that was against them, they bestowed upon us a gift. The actions of this erudite man and his fellows don’t merely assist us in realising the dreams and goals of Thomas Muir, the allow us to realise our own dreams and to see that no matter how impossible they may seem now (as Muir’s undoubtedly seemed to him), with our dearest efforts, they can and will be realised.

Let us respect his selfless sacrifice by continuing to allow his resonating message to empower our young people; by ensuring that injustice does not go unchallenged.

Ladies and Gentlemen, the life of Thomas Muir was wrought with trials and impediments. Yet, through all of this, he made himself a hero now remembered 250 years after his birth. Thomas Muir became a hero not through a quest for greatness or fame, but through his challenge of the accepted authority and dedication to ‘The People’.

Let us respect his selfless sacrifice by continuing to allow his resonating message to empower our young people; by ensuring that injustice does not go unchallenged; and by looking forward towards a better, brighter, more democratic world.