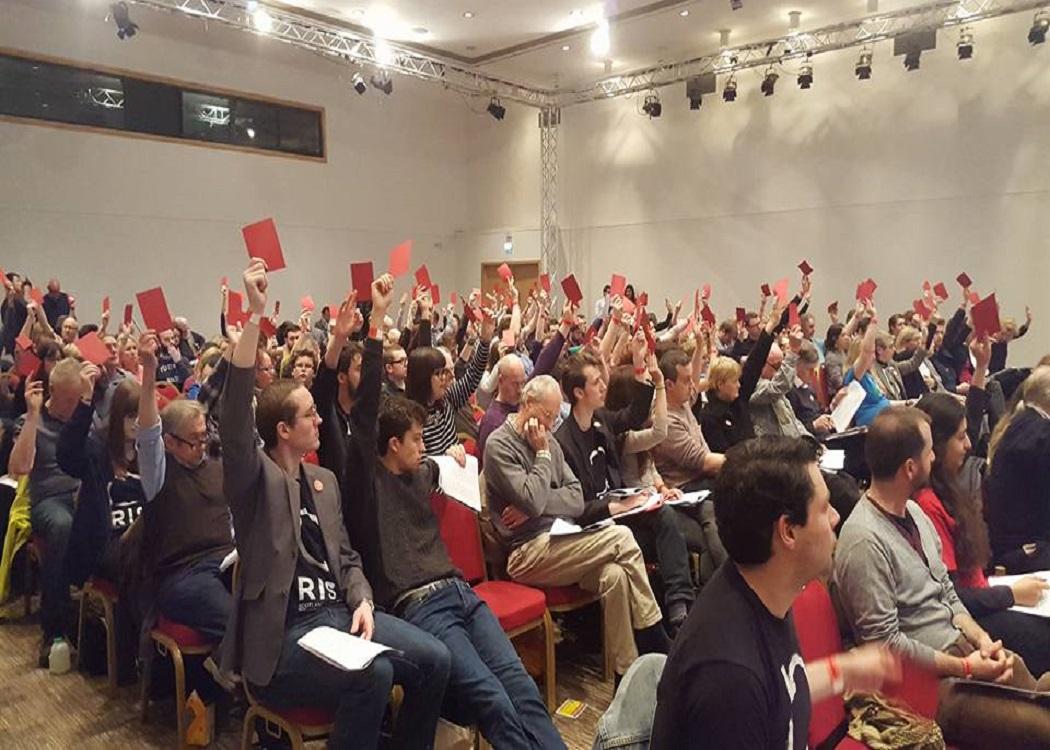 Ross Ahlfeld, who has a keen interest in Catholic social teaching and old Christian socialism, offers his thoughts on the new socialist coalition putting up candidates for the Holyrood election, Rise

AS A KID, I always remember people in my family hoping for good weather on the eve of every General Election day during the dark years of Thatcher.

They always used to say that the older Tory voters never did much during election campaigns, but that they could always be relied upon to come out and vote in numbers regardless of rain, hale or snow, whereas our people’s voting habits were partly subject to variables such as transport, income, apathy, childcare, work commitments and, yes, even the weather.

This idea was reinforced to me some years later while working as an election agent during the early days of the SSP in the 1990s. Davy, our candidate was a good guy and was always keen on us providing transport to the polling stations for voters from working class communities (regardless of how they planned to vote).

Rise represents the continued development of the positive political engagement of young people following on from indyref.

Similarly, you could say that a silent but staunch unionist block appeared once again in the majority No vote during the indyref. This was despite the fact that the Better Together meetings often had the appearance of ‘one man and a dug’, as opposed to the spectacular Yes rallies at George Square.

With this in mind, I was recently asked for my opinion on the creation of Rise, the new Scottish left alliance from a traditional Christian-socialist perspective. This required me to do a bit of research, but my first thoughts were that it was great to see Rise announce its candidates for the upcoming Scottish Elections .

Rise represents the continued development of the positive political engagement of young people following on from indyref. The presence of Rise will also provide much needed anti-austerity and anti-war voices within the independence movement during this election.

I also like the fact that Rise is founded on four pillars – respect, independence, socialism and environmentalism. Especially environmentalism, the first time I ever encountered environmental activism within traditional Labour movement circles was through Rosie Kane’s activism against the M77 and M74 extensions.

At that time, the SSP was pulling together a broad movement of activists, some from the Labour party and others like Rosie who arrived as a true inspirational grassroots activist, none of whom were required to have read Das Kapital several times before getting involved.

The presence of Rise will also provide much needed anti-austerity and anti-war voices within the independence movement during this election.

So it’s encouraging to see this type of alliance also present in the formation of Rise today. Yet, I’m not actually sure how many ordinary working people there are on the RISE candidates list rather than folks who are already working in journalism or politics, or folks who are journalism and politics graduates.

Regardless, the advent of Rise is a positive development and much needed since many on the Scottish left’s poor decision to tactically back SNP in last year’s UK election (When I was in the SSP we fought against the SNP, we never backed them).

Nobody else really held this position in the SSP even back then, but you could still be in the party and hold this position. I’m not sure if the Scottish Christians involved in the new ‘Don’t Stop a Beating Heart’ campaign which was launched recently would be welcome within Rise, the SSP or in any far left Scottish party today since they are now mostly dominated by liberalism more than anything else.

However, if the future of the SSP is going to exist via alliances with Rise (just as Militant Labour became the Scottish Socialist Alliance which became the SSP) then we need to shake off the residual indyref bitterness which suggests that the Better Together victory was due mainly to the elderly and the affluent.

For me, this shows a typically misguided leftist mindset which has not learned from the lessons mentioned above. Any serious leftwing opposition in Scotland has to reach out to those people who aren’t either socialists or supporters of independence.

The advent of Rise is a positive development and much needed since many on the Scottish left’s poor decision to tactically back SNP in last year’s UK election.

Billy Bragg touched on the left’s failure to engage with opposition voters when he noted that during the 1987 election Red Wedge played every working mens club and miners’ welfare from Glasgow to Liverpool despite the fact that these people were always going to vote Labour anyway.

Meanwhile, the Tories were appealing to individual aspirations and dreams more in tune with the video for Club Tropicana by Wham rather than The Smiths or Paul Weller. One has to ask how many times the left is going to repeat the same mistakes.

Unfortunately for those on the Scottish left, it’s a fact that unionists, royalists, religious people, elderly folks, social conservatives and middle class people etc. are also part of our society, too. It would be better to seek a common good and an economy with them rather than simply dismiss such large numbers of voters.

If Rise is going to succeed then it needs to distance itself from the idea of the affluent and the elderly as outsiders. This type of thinking is highly problematic since, by the same logic, we also need to acknowledge those other more challenging statistics which highlight the fact that most non-Scottish born residents in Scotland voted No and that a majority of Scottish Catholics voted Yes.

Does this then mean that organisations like Rise should therefore ditch civic nationalism in favour of ethnic nationalism and embrace the social conservativism of Catholicism? No, this would obviously be an anathema for a typically liberal-Left political alliance.

If Rise is going to succeed then it needs to distance itself from the idea of the affluent and the elderly as outsiders.

Therefore, by the same principle, neither should Rise simply ignore everyone who isn’t a student, a liberal, secularist or a nationalist based on the experiences of Radical Independence during indyref.

Often, progress involves building a movement with people you don’t like and disagree with. This was the genius of the early Labour party which was able to build a mass party of socialists, social democrats, Christians, fabians, trade unionists, cooperatives, Labour-Zionists and pacifists.

Equally, if the Scottish left cannot accept the fact that a majority of Scottish working class people are not and never will be socialists then Rise will remain as just another fringe vanguard party.

So far, the early signs are not great since Rise consists mostly of weel kent faces drawn from the ranks of the old vanguardist SSP, SWP, ISG, SLP and RIC (I think that covers all the Trotskyite acronyms involved although a couple of blokes from the PFJ and the JPF might be involved, too).

Neither is Rise fielding any candidates at constituency level, only list candidates and this is a critical point since grassroots movements really need to be localist in the first place.

For example, it’s admirable that Rise aims to “run a campaign which will give ordinary people back some hope”. This is good, as Christians we can say that hope is good, but maybe we need to try and get away from trying to “give” people hope, rather we should consider supporting communities who are trying to build up hope and take control of their own affairs for themselves.

Often, progress involves building a movement with people you don’t like and disagree with.

Such change and real grassroots movements can only grow from local associations of different and diverse groups of people from within the community. It is impossible to fight cuts from central government when your movement is top down and isn’t operating at a local level.

It can also be quite difficult to fight cuts when a part of your focus is on geopolitics and international solidarity with some of the failed models we see coming from the likes of Syriza and Podemos.

Such groups seem to be looking for us to choose between two flawed ideas: a centralized statist, debt-based socialism which tries to exist within a capitalist system or a globalized, free market system which imposes austerity.

Neither of these options are capable of generating any real value and neither of these choices resists the reduction of human beings to a commodity. In reality, what’s needed is a social market economy which is based on human relationships. Or in other words, a socialism that talks about family and community rather than calling for revolution.

Similarly, there is also the risk in getting too bogged down in cultural issues and getting into conflict with faith communities, parents and faith-based schools. For example, the Time for Inclusive Education campaign (Tie) which seems to be affiliated to Rise is demanding a statutory programme of education in schools to teach a syllabus which is inclusive of the LGBTI+ community, including in sex education.

This is a perfectly acceptable, noble and well meaning pressure group or platform to exist within the wider framework of Rise. However, it remains to be seen just how dominant such issues will become within Rise. The criticism which is sometimes thrown at Trotskyite groups is that they often turn to liberalism or changing our personal lives and culture whenever they’ve lost the economic arguments or are unable to make a difference to living standards.

It can be quite difficult to fight cuts when a part of your focus is on geopolitics and international solidarity with some of the failed models we see coming from the likes of Syriza and Podemos.

On a more positive note, Rise has also stated that it will run a direct action campaign which includes flash mobs and occupations. Awareness raising and creative ways of engaging with voters will be a welcome addition to the mainstream forms of electioneering.

Perhaps some of these more radical activities might include the fight to protect our existing amenities such as schools, sports centres, provincial colleges and small businesses. I’d hope that among the stunts, Rise would also organise events which support ANY local councilors fighting to defend cuts to services.

If we can do this and if we can protect those vital spaces where we all mediate and sustain our common life together, then perhaps one day there might not be any need for Creative Scotland to award PS15,000 to artists to explore what it’s like to live within a boundary.

Therefore, let’s protect funding to our sports clubs and social clubs where people can come together, protect the credit unions where we can all save and borrow small amounts of money without going to a bank.

Keep the busy community centres where there are plenty of stimulating evening classes from kettle bells to conversational Spanish. Save the schools our kids go to, give us small, locally owned shops, a church, good public baths, a well kept park, a decent local library. Throw in a pub that serves a nice pint and a junior football team that occasionally wins and I would never leave my town.

Perhaps Rise could fight to defend these small things, too, because it’s here that our lives are lived: life together in community, sharing with each other, looking after each other, helping each other and loving our neighbours as ourselves.

I wish them well!