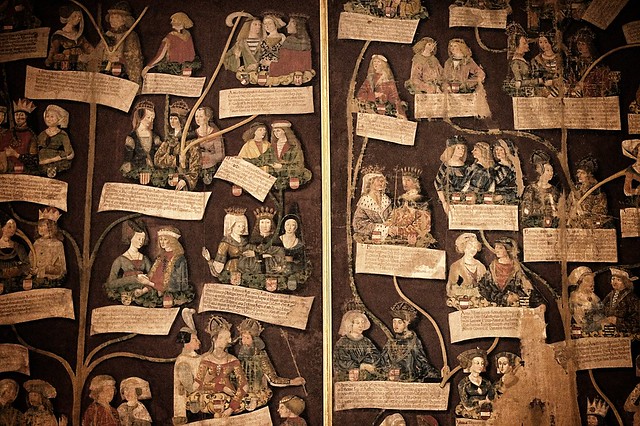 Ross Ahlfeld, Christian socialist, argues that Blue Labour – a socially conservative social democratic ideology – wrongly views communities and places as stable entities, when in fact they have been and are always changing

INTERESTING Fact! I can trace all my direct descendants back to a poor itinerant farm worker called Carsten Ahlfeld who was born near the village of Altenesch in 1710. Oddly, every single one of his descendants were then subsequently born in various different villages all along the banks of the meandering river Wesser, right up to my Great, Great Grandfather ‘Bernhard Deidrich Ahlfeld’, who left Bremerhaven to work in Abram Lyle’s Greenock sugar refinery in 1862. My forefathers moved around the rural flatlands of the North German coast because they were all ‘Heuermann’, which is an archaic Plattdeutsch word meaning ‘hired hand’.

The reason I’m writing about all this is because there has recently been a great deal of chatter coming from various pro-Brexit socialists and post-liberal Leftist types about ‘rootless cosmopolitans’ versus the ‘rooted patriotic working-classes’.  This is mainly because the Blue Labour tendency puts a great value on the importance of place and belonging.

Yet, the hole in this concept of place is in the fact that my own working class ancestry and identity (and probably yours too) has never been entirely rooted in one single place, at any time, in the last three centuries.

Over on my Mother’s side, there are even more itinerant agricultural labourers among my Irish forefathers who spoke just enough ‘Scots’ to come here during the harvest seasons to work in the fields. For good measure, my wife’s family tree is a mix of Ulster Scots, Geordie, Highland Gaels displaced by the Clearances and even a dash of Welsh via East London.

In more recent decades, during the war years, lots of English servicemen and workers from the Woolwich Royal Arsenal moved up to Greenock to work in the munitions factory.

READ MORE: Steven Keith: Where did the Scots come from?

These days’ many Greenockians have English Grandfathers and Great Uncles. My kindly Great Uncle Bert for example, spoke with gentle West Country accent, which was in sharp contrast to the rapid fire Scots of his fellow shipyard workers at Adams Boatyard in Gourock, where he worked alongside my Grandfather.

Similarly, my best mate’s Grandad was a postman called Wilf from Bridlington and none of this was especially unusual round our way. The fact that the British working class now includes Filipinos, Ghanaians, Ugandans, Indians and Tamils shouldn’t really be much of a surprise to anyone.

As such, I really have to wonder where this mythical ‘rooted’ working class are to be found, as they’re certainly not ‘down south’ either.  Again, the town of my birth seems to give witness to the fact that men like Abram Lyle, the aforementioned Greenock born Sugar refinery owner, took train loads of Scots to the East End of London in 1882, mostly handpicked from his Greenock workers. Just as the football clubs Millwall and West Ham United were also established by Scottish shipyard workers.

It is exactly this type of ‘free movement’ which explains why so many Cockneys have Scottish names, while some others have French Huguenots names.

Indeed, have all those within the post-liberal labour movement talking of ‘rooted working classes’, never watched Auf Wiedersehen Pet? Have they never visited Corby, with its huge Scottish Diaspora who went there in the 1960s for the steel works which once employed 28,000 people?

Much of this rhetoric about ‘rooted and rootless’ workers takes its lead from the writer David Goodhart who defines “Somewheres” as less affluent and less well educated working class people who are rooted in a geographical identity, feeling marginalised by globalisation.

‘Anywheres’ on the other hand are the affluent University graduates with no ties or loyalty to any community, who benefit most from globalisation, moving away in pursuit of wealth and ‘social mobility’.  In doing so, these young go-getters create an even more atomised and individualistic society, leaving their socially isolated elderly parents with nobody to look after them.

Hence, the demand for all these selfish’ city types to forget their careers, instead they should stay in town and look after their parents. Fair enough, but there is a risk which comes with the endless calls for localism and community led solutions. There is a hidden negativity which manifests itself from too much harking back to the days of families and neighbours looking out for each other.

For example, at best, there’s an air of ‘Big Society’ about Lefty-Brexiteer Canon Giles Fraser’s recent comments on our deepening elderly care crisis, and at worst, his words sound vaguely Victorian: “Children have a responsibility to look after their parents”, states Canon Fraser, while arguing that it is families and communities who should be caring for the elderly and not the State. Where are the families, asks Giles? Maybe they’re all working 12 hour shifts for a pittance of pay in the care sector, or on zero hour contracts?

Yet, how does a solidly Leftist Churchman with Christian-Socialist views much like my own, end up responding to massive cuts in social care by stating that: “It is the daughter of the elderly gentleman that should be wiping his bottom”.

To my mind, too many Blue Labour people and Post-liberal Leftists, start off yearning for the good old days, lamenting the dehumanising commodification of the Big State and end up becoming useful idiots for Tories seeking to make cuts and  restore the deregulating, laissez-faire State which would further strip ‘hardworking families’ of their dignity and value.

For example, Blue Labour founder Maurice Glasman sought to develop a politics of common good, so that the power of globalisation can be resisted based on our Labour and trade union tradition of democracy, community and the idea of place and belonging. This is a noble cause which I stand in solidarity with. I even agree that the free movement of labour has often been to the benefit of the bosses, constantly seeking to drive wages down and profits up, while stripping less well off nations of its best workers.

Yet, as much as I admire Maurice, it’s clear that Giles Fraser’s comments on social care, perfectly exemplify the dangers of where post-liberal, anti-statist ‘Labourism’ has the potential to take us.

Such ideologies have a capacity to lead us into a hostility towards our welfare state, all the while speaking the language of The Left. Similarly, some of these theories also have the ability to take us down the road of unconsciously cheerleading for cuts to our NHS, dressed up as some kind of Christian, family-centric pre-1945 socialism.

Indeed, many of my fellow Christian Socialists within the post-liberal Left, identify pre-45’ labourism with the pillars of localism over centralism, community ownership, virtue, civic duty, decency, family, faith and flag. It is exactly this mythological and faulty claim which undermines the entire Blue Labour tendency.

In reality, Clement Attlee’s post-war Government wasn’t any less civic, community focused, (or even any less Christian) than the Labour and Trade Union Movement which came before it in the late 19th and early 20th centuries.

In actual fact, Clement Attlee’s post-war Labour Government’s was quite Christian in both its ethos and origin.  All the new council houses built after 1945 were regarded as an effort to build a ‘New Jerusalem.’ Just as the 1941 Beveridge Report, which subsequently inspired the construction of decent social housing also employed the familiar allegorical Christian language of John Bunyan’s Pilgrim’s Progress. As Attlee famously said: “Remember that we are a great crusading body, armed with a fervent spirit for the reign of righteousness on earth.”

In the same way, William Temple who was the Archbishop of Canterbury between 1942 and 1944, was also very much a socialist. Temple’s book ‘Christianity and the Social Order’ sets out his vision for a decent, civilised Britain and it greatly influenced the creation of the Welfare State.

READ MORE: Patrick Phillips: The relationship between citizen and state has to change at local level

The point being: there is not really any value in ranting against both the big State and metropolitan liberal elites, when we urgently require meaningful work as to alleviate poverty and offer dignity to all our communities! In times of economic depression, the only way to do this is via a post-war style, programme of massive job creation and this activity is the province of central Government.

Like it or not, we must look again to ‘The General Theory of Employment, Interest and Money’ by John Maynard Keynes. He believed that governments must spend to create jobs as to stimulate domestic demand. Keynesian economics argues that job creation initiatives are necessary during times of economic depression, as part of what Keynes described as the ‘multiplier effect’.

Finally, we are seeing a resurgence of 19th century social attitudes which make the unemployed responsible for their own joblessness while describing poverty as a vice or a personal choice. These are the very same attitudes which resulted in the creation of the Poor Laws, designed to deter the working classes from reliance on welfare.

Blue Labour people are supposed to be about tradition; some of them would do well to study the reality of working class history before we find ourselves on the wrong side of the picket line with the Tories, the bosses and their far-right lackeys.