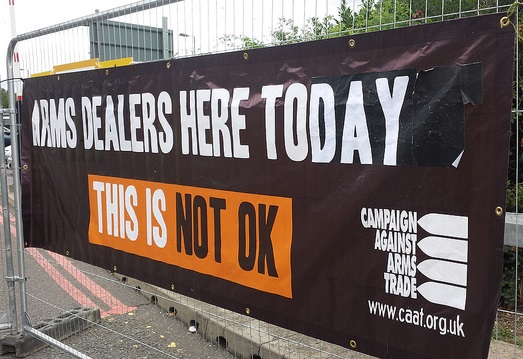 LAST MONTH I was delighted to meet up with Fr. John Dear and share a lovely meal with him and other friends at the Quaker Meeting House in Edinburgh, courtesy of the good folks at the Edinburgh Peace and Justice Centre.

Rev John Dear S.J. is a well known American jesuit priest, peace activist, organiser, lecturer, retreat leader, and author/editor of 28 books on peace and non-violence. Archbishop Desmond Tutu has nominated him for the Nobel Peace Prize and he’s been imprisoned and arrested some 75 times for civil disobedience and non-violent direct action.

It was quite a poignant and fitting time for Fr John to be among us, since while he was here, Brian Quail, one of our Glasgow Catholic Workers, was being held at Low Moss  prison. Brian was locked up for refusing to accept very restrictive bail conditions following his own non-violent direct action against Trident.

Glasgow Catholic Workers are asking for as many people as possible to join us in solidarity at the statue of Donald Dewar in Glasgow on Saturday 9 September, as we raise awareness of one of the world’s largest arms fairs, DSEI.

These conditions would have stopped Brian from attending our monthly Catholic Worker witness for peace and an end to weapons of mass destruction at Faslane. Fortunately, Brian was released a couple of weeks later.

Naturally, Fr John made reference to Brian’s incarceration and the ongoing scandal of nuclear weapons on Scottish soil during his talk at the Quaker meeting house.

John also reminded us that the US and the UK governments have also waged and funded conventional war in countries such as Syria, Iraq, Afghanistan, Yemen and Pakistan and continue to support injustice throughout the region by selling weapons to all  sides in all countries.

John pointed out that we are basically an oil and weapons-based economy, so we want to keep selling weapons which means we need more wars. He ended by encouraging us all to work for the abolition of war, poverty, nuclear weapons and environmental destruction, and fund and support non-violent conflict resolution.

With this in mind, Glasgow Catholic Workers are asking for as many people as possible to join us in solidarity for some (or all) of the time at the statue of Donald Dewar in front of Royal Concert Hall on Buchanan Street in Glasgow on Saturday 9 September from 10am to 3pm, as we raise awareness of one of the world’s largest arms fairs, DSEI (Defence and Security Equipment International), taking place in London from 12-15 September 2017, allowing buyers and sellers to network and make deals.

DSEI last took place in September 2015, and featured 1,500 exhibitors from around the world, displaying arms ranging from sniper rifles to tanks to combat aircraft to warships.

DSEI last took place in September 2015, and featured 1,500 exhibitors from around the world, displaying arms ranging from sniper rifles to tanks to combat aircraft to warships.

It was attended by “trade visitors” and military delegations, including those from human rights-abusing regimes and countries involved in conflict.

As Pope Francis has said: “We have to ask ourselves: why are deadly weapons being sold to those who plan to inflict untold suffering on individuals and society?

“Sadly, the answer, as we all know, is simply for money: money that is drenched in blood, often innocent blood. In the face of this shameful and culpable silence, it is our duty to confront the problem and to stop the arms trade.”

More so, the Campaign Against Arms Trade (CAAT) is highlighting the fact that for more than two years the government has refused to stop arms sales to Saudi Arabia – despite overwhelming evidence that UK weapons are being used in violations of international humanitarian law in Yemen.

Come and join us no matter who you are; secular or religious, nationalist or unionist, and together we’ll show the world that Scotland says no to the terrible crimes being committed with UK weapons.

For example, given the evidence and the volume of UK-manufactured arms exported to Saudi Arabia, it seems inevitable that any violations of international humanitarian and human rights law by the coalition have involved arms supplied from the UK. This constitutes a breach of our own export licensing criteria.

Furthermore, ignoring massive public pressure to stop the arms sales, the government has instead done everything it can to maintain its relationship with Saudi Arabia, the UK’s biggest arms customer.

Meanwhile, the devastation caused by the Saudi-led attacks on Yemen continues. More than 10,000 have been killed, millions more face starvation and disease and a child dies every 10 minutes from preventable causes.

Finally, the complicity of the UK is undeniable. The government itself admits that UK-made combat aircraft, missiles and bombs are being used in the bombing. But instead of stopping arms sales to Saudi Arabia, it has licensed the sales of an astonishing £3.3bn more weapons since the start of the attacks on Yemen.

And so, on 9 September please come and join with us in Glasgow witnessing for an end to the arms trade. Come and join us no matter who you are; secular or religious, nationalist or unionist, and together we’ll show the world that Scotland says no to the terrible crimes being committed with UK weapons.