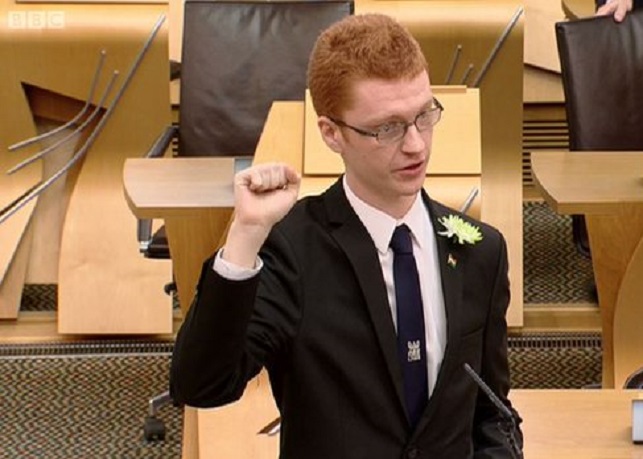 GESTURE POLITICS isn’t at the sophisticated end of political discourse but sometimes it’s all that’s available to you. That's why I raised my fist when taking the oath of allegiance to 'Queen Elizabeth, her heirs and successors’ last week.

Given the choice of course, I, nor any other Green MSP, would swear such an oath but that’s not how our parliament works. I felt it better to make a quiet statement of my objection than to do nothing (not that I have a problem with those republican MSPs who simply got it over with without a fuss).

The fist does conjure up strong images for some people. Morvern highlighted in her article that to her it means Tommy Sheridan. Fortunately, it was around long before the Sheridan saga and will still be around long after.

We should not be afraid of calling ourselves socialists if we believe that is what we are.

It is a symbol of solidarity and common struggle and we should not see it as unusable because of one man’s actions. In that same vein we should not be afraid of calling ourselves socialists if we believe that is what we are.

I believe that Green politics is socialist politics and we should be relaxed about saying so. It’s not something we need to spend much time debating, indeed I’d far rather we spent more time on doorsteps and a bit less talking to each other but there’s no point in pretending that it’s not an issue.

During the Holyrood campaign Natalie Bennett and I sat down with a journalist from Commonspace, covering a wide range of topics including independence, Jeremy Corbyn, class and where exactly Green politics fits on the political spectrum, specifically in relation to socialism.

Natalie’s answer was almost exactly how I’d put it myself. If you simplify Green politics into two strands they’d be people and planet. 'Traditional' socialism doesn’t really cover the need to live within the ecological limits of our planet, its origins came long before we had any idea the scale of the damage we were doing, long before what we’d recognise as the green movement emerged.

I believe that Green politics is socialist politics and we should be relaxed about saying so.

The 'people' side of our politics, however, fits very comfortably into the broad definition of socialism. We believe that public services should be run in the public interest, that the free market is utterly unfit to solve the world’s problems (it is often the cause of them) and fundamentally, that democracy is such a good idea it should extend into our economy, such as through giving workers the right to form cooperatives.

These two strands are far from mutually exclusive, though. We don’t just put planet before profit ('pure' ecology) or people before profit ('traditional' socialism). The world is more complicated and, critically, more interlinked than that. What is unique about Green politics is our belief that the economic, environmental and social challenges we face are interrelated and so the solutions should be as well.

That’s what makes our environmentalism socialist – we believe in a fracking ban and comprehensive public transport systems because the free market cannot be trusted to safeguard our planet.

You could call it 'socialism plus' but I don’t think that really captures it. I much prefer this quote from a leading German Green of the early 1980s: "Greens are to Marx what Einstein was to Newtonian physics."

The concerns some Greens have for attaching ourselves to the label of socialism comes from a belief that it is inherently more authoritarian than what we ourselves believe in, but to accept that is to see socialism through a very narrow filter.

What is unique about Green politics is our belief that the economic, environmental and social challenges we face are interrelated and so the solutions should be as well.

It is true that there is a strong trend of authoritarian thought within socialism, exemplified by the 'democratic' centralism of old-school Trotskyist parties, for example, but there is an equally strong strand of libertarian socialism. Indeed, the strapline for the blog whose article I am replying to is "constructive dissidence from the lower left corner", ie. from the corner of the political spectrum libertarian socialists inhabit.

We’re not just ecologists and socialists, we’re much more than the sum of our parts. Socialism is still one of those parts, though, and we shouldn’t shrink away from that. We should be brave enough to define it for ourselves, rather than let it be defined by those who owe us no favours.

When Bernie Sanders can win tens of millions of votes for his brand of democratic socialism in the home of red scares and McCarthyism, we should have nothing to fear here in the nation of Red Clydeside, John Maclean and Mary Barbour.