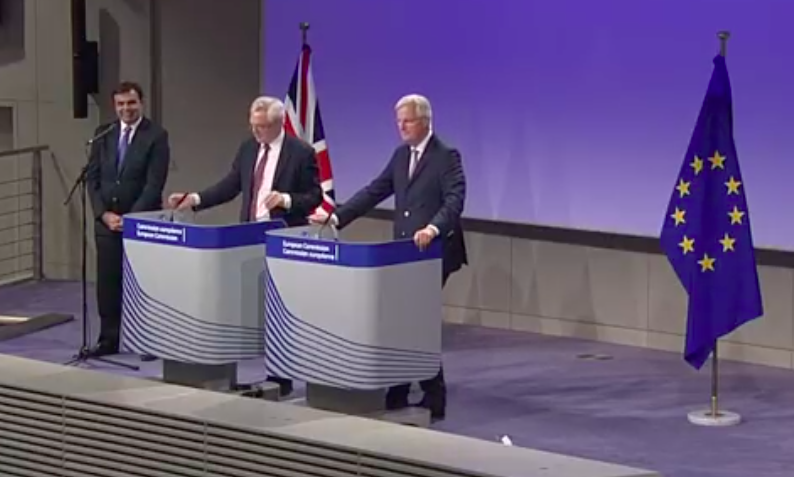 THE THIRD round of Brexit talks will take place today, with the UK looking to push forward on trade negotiations.

UK Brexit Secretery David Davis is expected to try to steer talks towards trade during the third round of negotiations during talks in Brussels later today.

But his EU counterpart Michel Barnier will demand progress on the “divorce bill,” current EU citizens’ rights, and concrete assurances regarding the Irish border.

Speaking to the BBC, Davis said: “For the UK, the week ahead is about driving forward the technical discussions across all the issues.

“We want to lock in the points where we agree, unpick the areas where we disagree, and make further progress on a range of issues.

“But in order to do that, we’ll require flexibility and imagination from both sides.”

A European Council summit will be held in October, where progress on Brexit will be discussed by leaders.

One of the main stalling points of negotiations is thought to be the amount Britain will pay to leave the EU.

The EU want UK negotiators to propose how they will calculate a figure that Britain will pay to leave the EU, but UK ministers want assurances of a trade deal should a transitional period be approved.

However, a report in the Telegraph this morning states that France and “other EU” nations are looking to progress talks towards a trade deal at the same time the Association of German Chamber of Commerce has thrown weight behind the idea.

In addition, the British Chamber of Commerce has also asked ministers to agree a suitable economic plan.

Citing information of a French-led proposal, The Telegraph claims a £10bn per year payment would allow the UK to accept EU law for a two or three year “transitional period,” aimed at minimising disruption post Brexit.

Charles Grant, director of the Centre for European Reform, said: “Many top officials in the EU and in governments would welcome an offer of €10bn-a-year for three years as part of a transitional deal that would move the talks process forward.

“If the British get their act together and make a serious offer on the money to their partners they will not only put the EU on the defensive, they will also expose the divisions in the EU on how to respond to the money deadlock.”

The £10bn per year payments made would be to plug the “black hole” of the EU’s unspent budgetary commitments for the final two years of the current seven-year cycle.