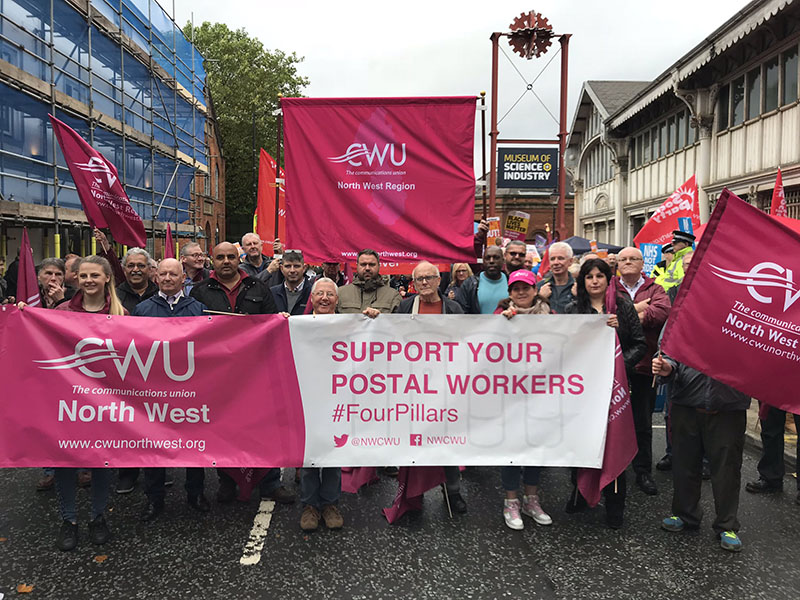 IN WHAT WAS the first nationwide strike ballot to take place since the introduction of Tory legislation on turnout and results thresholds, Royal Mail workers in the Communication Workers’ Union (CWU) delivered a massive 89.1 per cent vote in favour of strike action.

The CWU’s high profile campaign for a Yes vote saw almost three quarters of the union’s Royal Mail members take part in the vote, sparked by disputes over pensions, pay, working hours and job security. Tuesday’s vote has already fuelled speculation that nationwide strikes could now look set to cause major disruption over the Christmas period.

In May, Royal Mail announced that its pension fund would close to further accrual in March 2018. The company argued that the scheme was unaffordable, and justified the move on the grounds of remaining competitive. The decision comes – of course – just four years after Royal Mail was privatised.

The CWU’s deputy general secretary (postal) Terry Pullinger said: “This ballot result is hugely significant and demonstrates a strength of feeling that can only be translated as a massive vote of no confidence in the managerial leadership of the Royal Mail Group and the direction that they advocate.”

“Our members are prepared to stand up and fight to protect their terms and conditions.” Dave Ward, CWU

CWU General Secretary Dave Ward said: “As the first union to test the Trade Union Act we have passed with flying colours. The mixture of a fantastic campaign, led by Terry Pullinger and the Postal Executive, a brilliantly innovative communications strategy and an inspirational ground force has returned a resounding result.”

He added: “The CWU have tapped into a mood amongst workers in across the UK. Our members are prepared to stand up and fight to protect their terms and conditions and we will do everything within our means to defend them.”

Royal Mail currently employs around 161,000 people in the UK and enjoys a net income of £273 million. In the immediate wake of the company’s privatisation, criticisms were levelled that the public service had been undervalued, as share process rose by 38 per cent on the first day of conditional trading. Indeed, after six months, Royal Mail’s market price was 58 per cent higher than its sale price.

The CWU’s Postal Executive says it will meet before the end of the week to discuss the road ahead, as well as potential strike dates.