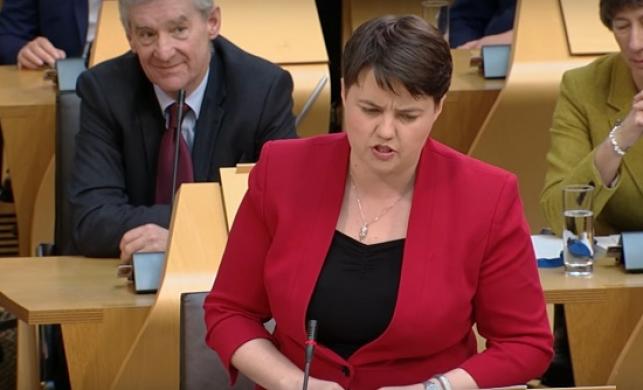 AS pressure mounts on Ruth Davidson to denounce bigoted attitudes in her own party, CommonSpace has been told the Scottish Tory leader will not be available for an interview for two months.

The Scottish Conservatives came under fire yesterday after news broke that two Tory councillors in Stirling had been reinstated in the party following suspension for racist and sectarian social media posts. While the party released a brief statement, Ruth Davidson has been unavailable for comment since.

The pair were suspended by the party after it emerged that Majury had tweeted using an offensive term for Catholic people and suggested that all Catholics sexually abuse children, compared Scottish nationalists to Nazis, and denounced local food bank charity Start-up Stirling for being “run by a SNat”.

Calls for Davidson to explain the decision, roundly condemned by political opponents, have continued steadily on Twitter. After Gary Robertson of BBC Radio Scotland tweeted that they were advised Ruth Davidson would not be available for interview this week, First Minister Nicola Sturgeon suggested the Tory leader was avoiding questions about the reinstated Stirling Councillors. When CommonSpace requested an interview with Davidson, the press office advised that she would not be available for “a couple of months”.

When the going gets tough… https://t.co/WmNMTC7OZb

Re last tweet, this appears to be one of the reasons Ruth Davidson is dodging interviews. https://t.co/Ghmk9tV3nO

SNP MSP Mark McDonald also suggested that Davidson was “hiding from something”, and referred to her column this week in the Telegraph in which she denounced the SNP’s “nationalism”.

SNP MSP James Dornan also called on Davidson to speak out on the controversy, saying: “Ruth Davidson has been posted missing since this growing scandal from within her party broke. She is dodging interview requests, and no wonder – Tory MSP Murdo Fraser’s attempt to defend the indefensible when questioned about this on radio was embarrassing to listen to.”

“Her silence on this is deafening – but utterly unacceptable and unsustainable. She can’t simply try and sweep this under the rug and move on.” James Dornan MSP

“But sooner or later, she will have to explain her decision to reinstate these two councillors – or people across Scotland will draw the conclusion that bigotry, sectarianism and racism are all more than welcome in Ruth Davidson’s Tory party.

“Her silence on this is deafening – but utterly unacceptable and unsustainable. She can’t simply try and sweep this under the rug and move on.”

This is not the first time Davidson has prompted media reports about a lack of communication from the Scottish Tory leader. Davidson was personally challenged for remaining silent amid outcry as the family cap and rape clause were introduced by Westminster – a policy women’s campaigners have strongly criticised.

The Scottish Convervatives did not provide a response to a request for comment by time of publishing.