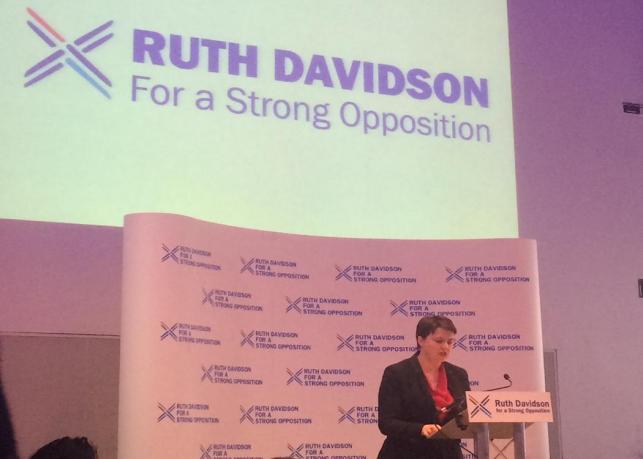 RUTH DAVIDSON, the Scottish Conservatives leader, has advocated the building of 25,000 new homes a year, saying Scotland should “look at a series of new generation new towns”.

In a speech to the Institute of Public Policy Research in Edinburgh this morning, Davidson argued that “the last time we had a housing crisis on this scale was in the aftermath of World War Two”.

“Back then, politicians had the courage to act in order to get building,” Davidson continued. “We now need to find the same courage to address today’s needs. Market failure is depriving thousands of young people one of the most basic opportunities in society: the ability to buy and own your home.

“It is time to seize the moment – and look at a series of new generation new towns.”

“Market failure is depriving thousands of young people one of the most basic opportunities in society: the ability to buy and own your home.” Scottish Conservative leader Ruth Davidson

Davidson’s comments were quickly criticised by political opponents and commentators, many of whom pointed to the destructive effects of the Thatcherite right-to-buy policy upon the housing sector and the Conservatives’ record on social housing in general.

“We have delivered over 68,000 affordable homes since 2007, reintroduced council housing and have supported more than 23,000 people into home ownership.” Angela Constance

Scottish Government Communities Secretary Angela Constance said in response to Davidson’s speech: “We have delivered over 68,000 affordable homes since 2007, reintroduced council housing and have supported more than 23,000 people into home ownership.

“By ending the right to buy we have increased the supply of affordable homes.

“We are on track to deliver even more houses by 2021 with our commitment to deliver at least 50,000 affordable homes – including 35,000 social homes, backed by over £3bn investment during the lifetime of this parliament.

“And we’ve delivered greater action and investment to bring empty homes back in to use – a cost-effective way to increase housing and aide community regeneration.”

Pauline McNeill, Scottish Labour’s housing spokesperson, said: “No one will trust the Tories to deliver these policies. Ruth Davidson talks about the worst housing crisis since World War Two, but forgets to mention it was a radical Labour government that fixed it.”

Scottish Greens MSP and co-convenor Patrick Harvie argued that it was the “height of hypocrisy for the Tories to claim to care about Scotland’s housing crisis”.

“Their own disastrous right-to-buy policy obliterated our social housing stock and has left us with a legacy of people unable to afford to buy a home and stuck in increasingly expensive private rented accommodation,” he said.

Scottish Socialist Party housing spokesperson Bill Bonnar, who has worked in the housing sector for 20 years including time with the Govan Housing Association and the Glasgow Regeneration Agency, told CommonSpace that any new Tory commitments on increased housing could not be taken in good faith.

Bonnar said: “It’s not a serious proposal. As someone who spent years working in the housing sector, there was never any support for this within the ranks of the Tory party.

“There needs to be a big expansion of the social housing sector. Without that, any other measure, desirable in itself, won’t work until you’ve got that in place.” SSP housing spokesperson Bill Bonnar

“There needs to be a package of measures. The danger is thinking there’s a silver bullet for all this. There needs to be far more social housing. The private sector cannot fulfil housing needs, especially in terms of the range of housing that Scotland needs, particularly for a rising ageing population.

“There needs to be a big expansion of the social housing sector. Without that, any other measure, desirable in itself, won’t work until you’ve got that in place. Once that begins to have an impact, you can bring in other measures, like rent controls in the private sector.”

Rent controls have been advocated by Living Rent, Scotland’s tenants’ union, in response to the crisis in social housing.

Graeme Brown, director of Shelter Scotland, told the BBC that it was “really positive” to see the Scottish Conservatives focus on housing, “particularly since right-to-buy legislation is part of the reason we have a shortage of social housing on which many low income households depend”.

“However,” Brown continued, “the focus has to be on providing homes which are genuinely affordable for those who need them most and which stay affordable, rather than feeding the next cycle of boom and bust in the housing market.”

The Scottish Empty Homes Partnership submitted a joint briefing alongside Shelter Scotland, Scotland’s Town Partnership and Ruling Housing Scotland during the debate preceding the Land Reform (Scotland) Bill, arguing that the bill “would be greatly strengthened with the inclusion of a Compulsory Sale Order power for empty buildings. This power would enable local authorities to bring difficult long term empty private properties back into use.”

Along with rent controls, Compulsory Sale Orders are another possible measure that have been widely discussed in recent years as a means of addressing the housing crisis, particularly in the aftermath of the Grenfell fire, when Jeremy Corbyn suggested that the UK Government consider requisitioning or using compulsory purchase orders for flats that were being deliberately kept vacant (a process known as land-banking)

“The irony of Ruth Davidson calling for more council housing in Scotland while her colleagues at Westminster continue to destroy the last remnants of it south of the border is not lost on anyone.” Common Weal head of policy Ben Wray

Proposals to give councils the power to issue similar orders on land at use value have also been developed by the think tank Common Weal.

Common Weal’s head of policy, Ben Wray, told CommonSpace: “The irony of Ruth Davidson calling for more council housing in Scotland while her colleagues at Westminster continue to destroy the last remnants of it south of the border is not lost on anyone.

“Nonetheless, if the Scottish Tory leader can say there is a housing crisis in Scotland and that we need a plan akin to the mass council housebuilding after the second world war to tackle it, then is there anyone left in Scottish politics who actually opposes a public-sector led solution to the failures of a privatised housing market?

“Common Weal has been developing proposals for such a solution that would include giving councils the power to compulsory purchase land at use value so as to make public housing a revenue-raising asset for local authorities over the long-term. This plan must also include controlling spiralling rent prices in the private sector, refurbishing the 34,000 derelict homes across Scotland and creating communities that are pleasant to live in, with green space and access to local amenities and public services.”