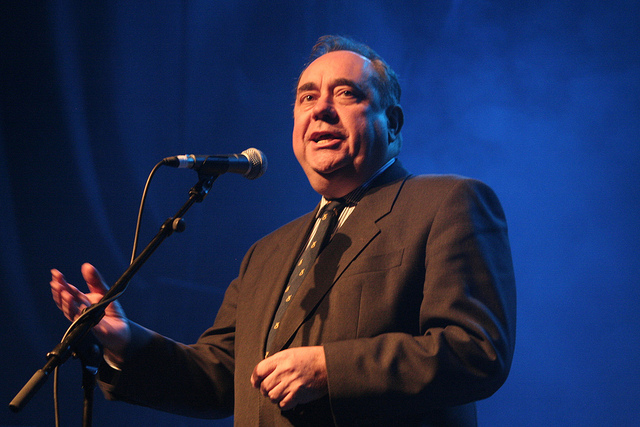 ALEX SALMOND has argued that Scotland’s renewable industry may need to “bypass” Brexit to become “the green energy powerhouse of the Continent”.

Speaking at Dundee University’s Renewables After Brexit conference, the former First Minister also gave his opinion that Scottish ministers should take steps to ensure that Scottish companies benefit from future contracts in the renewable energy sector.

Professor Peter Cameron, director of the University’s Centre for Energy, Petroleum and Mineral Law and Policy, raised the issue of Scottish companies losing access to markets within the EU in the aftermath of Brexit, saying: “The future could be positive since Scotland and the EU are committed to meeting demanding renewable energy targets, but there are concerns over what happens if companies based here cannot access EU markets and over the industry’s regulatory framework. What happens in the Brexit negotiations is of vital importance to the renewables sector in Scotland.”

Salmond responded: “As First Minister I called new forms of power into existence to redress the balance of the old. The wind power revolution of the last ten years is more fundamental than even the hydro revolution of the 50s and 60s.”

“Scotland’s renewable potential is unsurpassed in Europe, but Brexit offers fundamental challenge to realising that opportunity. We are leaving the European Union at precisely the time when energy policy is evolving into a more substantial form.

“A loss of access to research funding and the flow of people with ideas from Europe may bring about huge damage to Scotland’s renewable pre-eminence.

“If we really want to become the green energy powerhouse of the Continent then we require to bin or bypass Brexit.” Alex Salmond

“If we really want to become the green energy powerhouse of the Continent then we require to bin or bypass Brexit and establish Scotland’s political power lines with Europe.”

Salmond also commented that, although Brexit and delays to offshore wind farms such as Neart na Gaoithe had affected industry confidence in Scottish renewables, the rough period was now over.

Salmond said: “It’s an indication of the uncertainty that’s in the offshore industry in particular, partly because of planning delays, but largely because of looming Brexit.

“We need a flow of new developments in offshore generation and we need companies like BiFab to be building them.

“We’re through [the rough period] and are now at the stage where orders are being placed and it’s the job of Scottish ministers to have the power to ensure that Scottish companies benefit from these rules.”

Salmond went on to express his faith in Scotland’s renewable sector in the aftermath of Brexit, provided Scottish companies remain open to the latest wind turbine technology.

Salmond continued: “We need to build up the supply chain. That’s the design I had. I very much support offshore renewables.

“The President of the United States has never fully been able to understand a wind farm in Aberdeen is just an example of new types of technologies.” Alex Salmond

“My view is that the best way forward is floating turbines, but we’ll see soon. [Statoil’s Hywind] demonstrator off Peterhead will tell us if that’s the case. Hopefully we get the Aberdeen Bay Wind Farm off the ground and we can see other designs of turbines.”

In a dig at President Donald’s Trump’s attempted legal challenge to a planned offshore wind farm within sight of his Scottish golf course, Salmond said: “The President of the United States has never fully been able to understand a wind farm in Aberdeen is just an example of new types of technologies.

“But let’s pick the right technology for North Sea conditions. It’ll have to be larger, or it’ll be floating or it will be different from what we have now – certainly not onshore wind technology.

“Then companies will flourish in that environment because the structures required will keep people in business for generations to come.”

In October of this year, First Minister Nicola Sturgeon opened the world’s first floating wind farm off the shore of Aberdeenshire, which estimates show could provide power for 20,000 homes.

Although the project was developed by the Norwegian state energy company Statoil, Sturgeon emphasised that “Scottish suppliers have contributed to the Hywind project from the development through to the production phase and are still involved to investigate long-term potential for floating wind”.