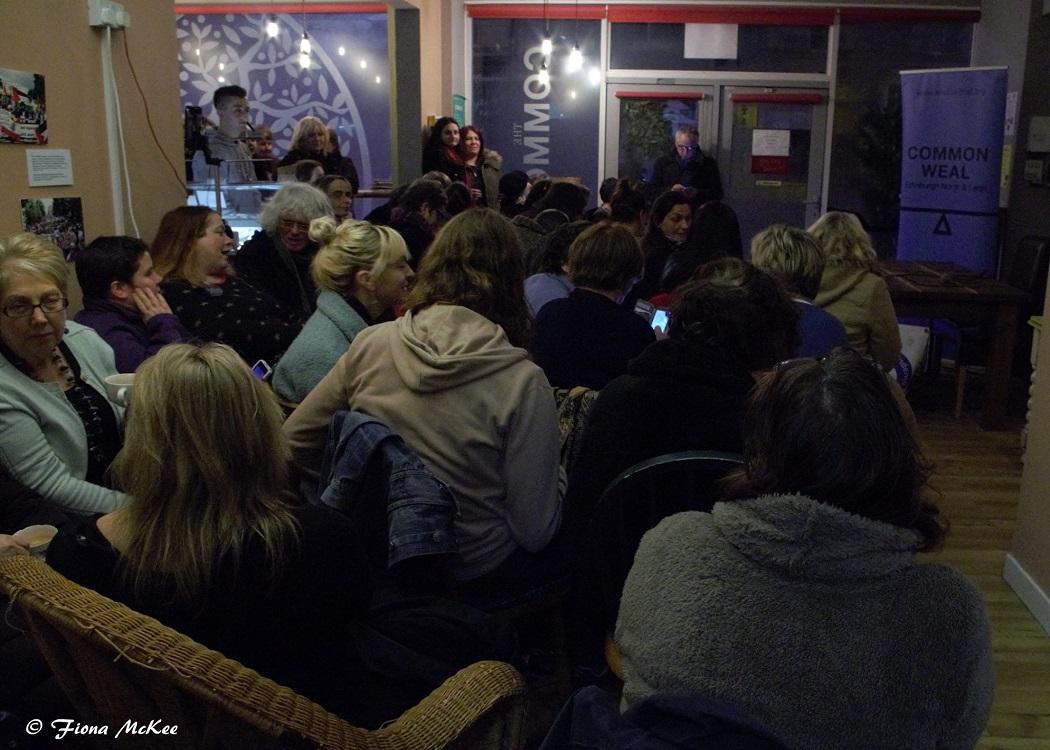 Sarah Beattie-Smith of Common Weal Edinburgh North & Leith explains how the local group became the first to open a Common Cafe which has proved highly popular thanks to a busy programme of talks, events and social get togethers.

IN THE weeks after the referendum, as we attempted to dry our eyes on our feet, it seemed everyone was searching for an answer to the question “what do we do now?” In the midst of this searching, I carried on campaigning at the Leith Walk Police Box, lovingly known as the Green Yes Tardis. It was at the Tardis in late September on a sunny but autumnally cold afternoon that I started the first conversations with fellow campaigner Jamie Szymkowiak about setting up a Common cafe in our community.

We’d both read the articles from Common Weal about what it planned to do next and thought – yep, that would work in Leith. Our first steps were to talk to other folk we’d grown to call friends through the phenomenal campaign that was Yes Edinburgh North and Leith.

We decided that we wanted to find a space where we could hold political discussions and events; where local groups could call home and where people could connect with one another to keep the dialogue of the referendum going. To start with, we looked at renting a space and turning it into a cafe with the aim of employing someone to run it.

But at our first meeting we looked at the funds involved and took a deep breath through gritted teeth. Everything was incredibly expensive and with all of us having busy full time jobs and not a lot of cash to spare, we decided to approach it from another angle.

The astonishing thing we learnt in those first three months was that if you ask people to come and talk to the people of Leith about something they care about, they say yes.

During the referendum we’d all been impressed by how politically active Area C coffee house on Leith Walk had been. So Jamie approached Phil and Carl who run the cafe and asked if they’d be up for joining forces.

To our relief they agreed that we could use the cafe in the evenings when they were closed.
After a few stumbles in trying to work out if we could afford to employ someone to serve food and drink, or whether we could find volunteers to help, we decided to just try and run events ourselves for a while and see how they went. So began the process of planning our first events programme.

We decided to launch in mid November, two months to the day after the vote, with a big party in the cafe. That night, with Robin McAlpine, Isobel Lindsay setting the scene and with tunes from Wounded Knee, Leathermonk, Carrie on Dancing and Gavin+Anna, we launched our first programme.

From mid-November to the end of January, we packed the place out with talks from Andy Wightman, architect Malcolm Fraser, Lesley Riddoch and huge events like the Women for Independence night with Elaine C Smith.

The astonishing thing we learnt in those first three months was that if you ask people to come and talk to the people of Leith about something they care about, they say yes. Time after time, huge names graced our door and drew in crowds from the community and beyond.

A lot of people have told us how much they love the Common we’ve set up and we’ve often heard that we’re inspiring other groups across the country.

At the end of January we launched our second events programme (click here to read more), taking us almost up to the General Election with events on topics as diverse as gender equality, food, trade union organising and the European Union.

We were also really excited to see the organic emergence of local groups like Leith Late and Crops in Pots using the Common to bring their experiences to a new audience. Book groups also sprung up by themselves, often using the Common Weal book as a starting point.

A lot of people have told us how much they love the Common we’ve set up and we’ve often heard that we’re inspiring other groups across the country as we were the first group to open a Common anywhere in Scotland. It’s wonderful to hear that kind of feedback and it’s what keeps us going.

While our events have been a success, in the cold winter months since Christmas the crowds have been a little smaller and I think it’s safe to say our own energy levels as organisers are diminished. When we started, we used to say that it felt like we were on a speeding train laying out the tracks in front of us.

We didn’t spend much time working out a constitution for our group or building the structures for a sustainable way to run things at the cafe. There are four, sometimes five of us organising two or three events a week, selling merchandise and doing the accounts, promoting events on social media and liaising with speakers and organisers. It’s a lot of work for a small number of people and I think if I were doing it all over again, I might spend a little longer getting a sustainable structure in place earlier on.

When we started, we used to say that it felt like we were on a speeding train laying out the tracks in front of us.

Looking ahead, we’re realising that our wee group can’t do everything ourselves forever. We’re now trying to bring in new people and we’re looking at trying to run fewer events but putting more work into broadening the networks we promote them to and bringing in new audiences. In short, we’re trying to do less, but do it better. We’re also really keen to make more of our connections with the local community, encouraging existing groups to use the space.

Being part of Common Weal Edinburgh North and Leith has been an amazing experience so far and I can’t wait to connect even more people with Common Weal ideas.

If you’re setting up a local group or a Common cafe and want to learn from and share experiences, please get in touch at commonwealenl@gmail.com