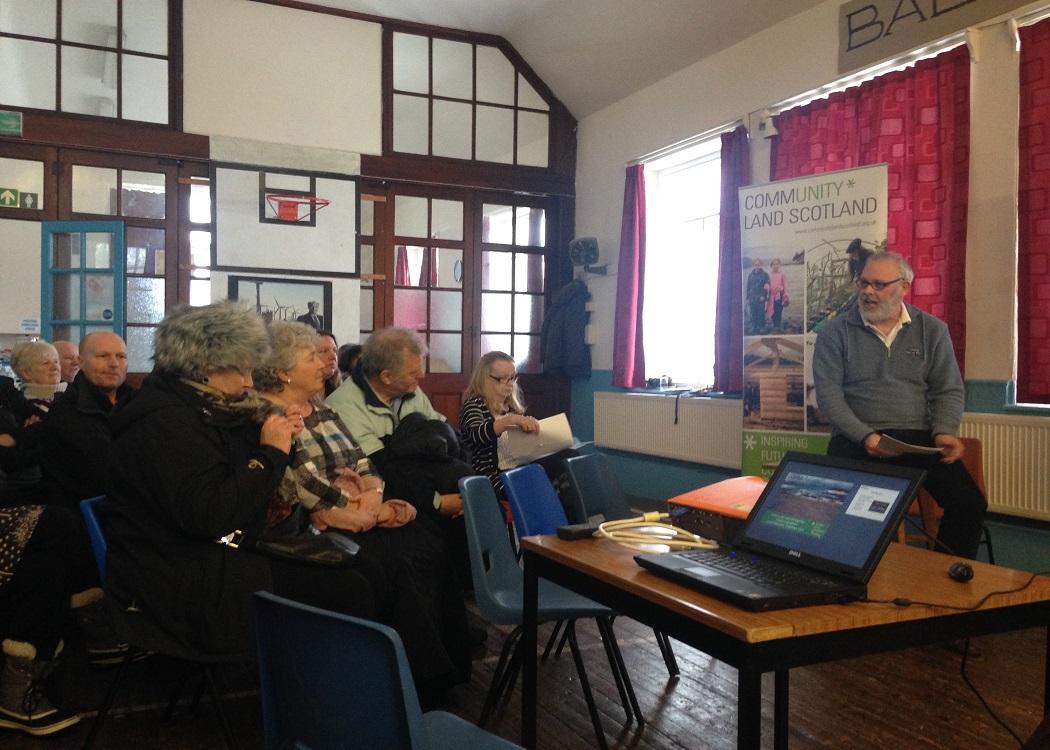 IN WANLOCKHEAD, just inside the north eastern end of Dumfries and Galloway, a small community is trying to grasp the power and means to survive and thrive into the future.

Meanwhile in Hawick, the biggest town in the Borders, the local council is consulting with the community on a flood protection scheme that will change the whole town and hopefully protect it from future floods. What unites these two places is a desire among local folk to have more power over the land they live on. Yet what divides them is their access to such power.

An inspirational group of folk recently got together to think the unthinkable – that perhaps the vast empty grouse moors that surround their village are not the natural state of being, and that maybe, out of the hands of the UK’s biggest landowner the Duke of Buccleuch , that land could provide a future for the local community instead of a hobby for a select few.

I travelled to Wanlockhead on a snowy Saturday with fellow Green candidate and land reform campaigner Andy Wightman and local green campaigner Janet Moxley. In the hills we found a full community hall, bustling with talk of possibilities, of what this former mining village could achieve if only they owned the land around them.

The meeting heard encouraging tales from elsewhere in Scotland, of other communities who were done with paying their respects and moneys to the Laird in the big house and who had decided to do things their way. We heard that 70 per cent of the Western Isles population now lives on community-owned land and that the people of Eriskay, South Uist and Benbecula just made PS700,000 net profit from community-owned energy.

Local folk shared their visions for the future of Wanlockhead. Most of them pretty normal – the power to heat and power their homes without spending every penny of their incomes; the ability to grow and maybe sell their own food; and the chance to create opportunities for their children to stay, work and bring up families of their own without having to leave for the cities.

Other ideas sparked visible excitement in the room. Taking a leaf out of neighbouring Leadhills and starting a ski resort; attracting mountain bikers, horse riders and hill walkers and giving shelter to those travelling along the Southern Upland Way; and pouring some love and care into the area’s crumbling heritage to attract visitors and income in the way that Beamish living museum near Durham does.

As the potential of the land started to sink in, the question grew – how can these possibilities be realised? None of their ideas are impossible of course, but that small group of determined folk now needs to create an organisation, a feasibility study and business plan and earn a mandate from a substantial portion of the community. They can put in a bid to have first dibs on the land if it comes up for sale but they will also need to enter negotiations with one of the most powerful people in the country, a man who is under no obligation to sell an inch of land. To top it off, they will need to raise millions of pounds. If they manage all that, the community of Wanlockhead will likely be one of the most empowered in Scotland.

Travel 75 miles to the East over the hills of Eskdalemuir and the townsfolk of Hawick in the Scottish Borders face a different set of choices. Repeatedly hit by devastating floods, the textile town was home to a community workshop this week to discuss council plans for a new flood protection scheme.

As community consultation meetings go, this was pretty good. Engaging speakers, lots of opportunities for local folk to make their views known and helpful explanations of the process to get Scottish Government approval for 80 per cent of the funds needed to go ahead.

What is land reform? Read our explainer.

The 40 odd people in the room shared their stories of what damage had been done by Storms Desmond and Frank. Old folk evacuated from their sheltered housing; homes ruined; incomes lost as businesses go under; unaffordable and unattainable insurance and the knock on effects of the floods on the rest of the town like road closures meaning healthcare and schools were inaccessible.

The longer term effects from previous floods are also evident – derelict properties, abandoned by owners who can’t sell flood prone buildings but can’t afford to maintain them either – and the legacy of attempts to control the river and use its power lingers as unused and unmapped mill lades and tunnels let water seep through cellars and cobbled floors.

But the Teries in the room were hopeful for a better future and a more resilient community. As plans for the flood defences were laid out, local folk were asked for their views on what would make the plans more palatable. Two to three meter walls around the Teviot in some places would dramatically alter the town and its relationship with the river.

Understandably, the mood early on in the meeting was a little cynical – why wasn’t this scheme going to be in place before 2019 at the earliest? Would it actually save the town from the kind of floods they’d just seen? But as ideas from a previous workshop in the community were shared, there was a palpable air of determined optimism.

Ideas abounded – a water powered Hawick with renewable energy, a heritage trail, landscaping and public art to soften the impact and make the most of the flood defences. Folk wanted local materials to be used and the resilience of the community to be celebrated. What came across so strongly was a proud sense of history, of identity.

Like Wanlockhead, the people here had built their community through hard graft over generations, trying to tame the land around them in order to create a life for themselves and their families. They rightly want to celebrate that history and tradition and to welcome others to share in it with them, regenerating the town as New Lanark has done.

For me, the key difference between these two communities is the power that each one has over their future and the land they call home. In Hawick, it’s the council that’s running the show, seeking approval from the community for its plans but the community has the power to object, to lay conditions and to help shape how public money is spent in their town.

In Wanlockhead it’s the community themselves driving progress but finding that the road ahead is long and steep. With no money, they’re going up against one of the wealthiest people in Scotland in an attempt to take control of their futures. The test of the limits of their power will be the support they’re able to garner from the Scottish Government, the local council and the wider public.

What seems clear is that we must end the culture of communities being done to by others and instead, unlock the power in our communities to do things for themselves. We must trust one another and trust communities themselves to make decisions about their own future and the land they call home.