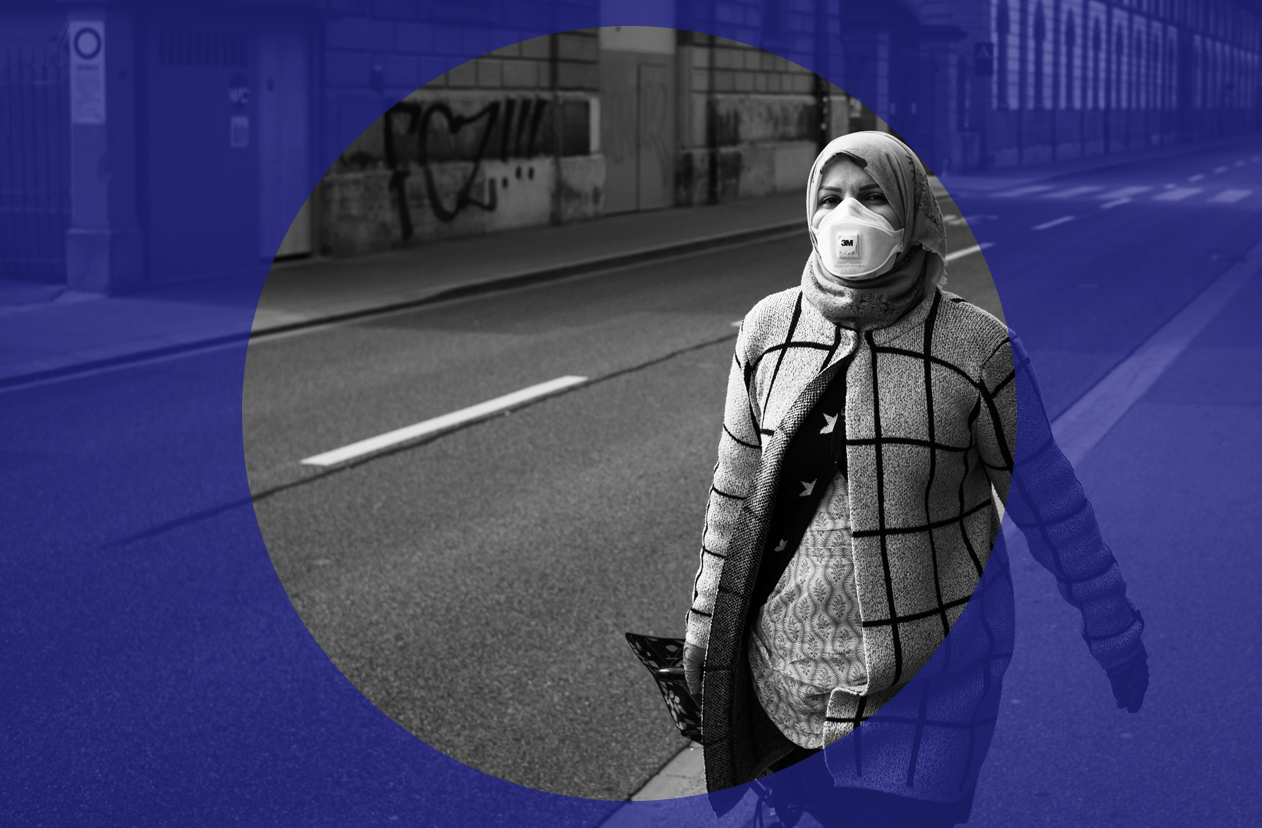 “Whether our future builds on rediscovered human and ecological values and community connections, as so many hope, will depend on what we do now – not after the pandemic is over, when it will be too late. We don’t want to go back to ‘their normal’, but the alternative might be a whole lot worse.”

IN THESE uncertain times, one prediction keeps recurring – that the world won’t go back to how it was before.

Whether our future builds on rediscovered human and ecological values and community connections, as so many hope, will depend on what we do now – not after the pandemic is over, when it will be too late. We don’t want to go back to ‘their normal’, but the alternative might be a whole lot worse.

Covid-19 has made many things possible that would have been politically difficult before. That includes massive government spending, but emergency legislation has also opened the way for levels of surveillance that were previously deemed unacceptable, and for right wing seizures of power, as have taken place in Hungary and Cambodia. And there is a serious risk that we will be faced with even greater inequality, both between and within nations.

It has been amazing to see the ease with which neoliberal governments have suspended their reliance on the market and turned to public spending, but despite all the public money, no private businesses have been taken over. This public spending in the UK and elsewhere has been described as a form of socialism, but socialism requires much more than public investment or even public ownership. In a socialist society, public entities would be run co-operatively by and for working people and local communities. The focus of current government spending is not the general public interest, but the interests of big business – combined with the minimal wider support necessary to maintain the peace. Neoliberal governments haven’t changed their spots. Their priority is to keep as much as possible in place so as to be able to get the system ‘back to normal’.

Of course, no one wants to see another Great Depression, and the mass unemployment and misery that that created. Investment is needed to prevent economic collapse, but this need not take the form of propping up the economic status quo, with all its tendencies towards inequality, economic crisis and ecological catastrophe. Vast amounts of public money are being spent to resuscitate a system that concentrates wealth in fewer and fewer hands, and threatens to make our planet unliveable.

Even Newsnight – that organ of the establishment – has observed how Covid-19 has exposed and accentuated inequality. Lockdown has a very different impact for people living in different circumstances; and the continued need for low-paid yet essential jobs puts many workers at high risks of infection.

There are always people who will use a disaster for personal profit, such as the traders who bet on market collapse, and the nature of this crisis plays into the hands of those who already control social media and online retail. The too-big-to fail entrepreneurs expect governments to bail them out, while small business and organisations face oblivion.

The UK Government’s over complicated and ill thought-out schemes may save a few, and allow some workers to be furloughed at reduced wages, but predictions for the number made unemployed range from an optimistic two million from the OBR to six million from economist David Blanchflower. Looking further afield to the Global South or the warzones of the Middle East, the prognosis is simply terrifying.

And, afterwards, who will be the winners and losers from today’s public spending? Already, at the height of pandemic disaster, the Governor of New York has railroaded through a package of austerity budget cuts. The Eurozone has proved itself incapable of sharing the burden of those member-states who have been worse afflicted. Like Greece before them, Italy and Spain will be left with debts that will subject them to the economic whims of their richer neighbours.

In the UK, the right-wing Social Market Foundation is calling for restricting pension rises. The justification for austerity is based on a fundamental misconception of the role of money, which falsely equates government spending with a family budget, but even if the UK Government resists the temptation for further cuts, they have shown no indication that they plan to do anything to undo decades of social destruction or stem the  growing inequality. Those businesses that they succeed in saving will be free to function as before. The whole world has discovered the need for public spending, but not yet how to use that spending to benefit those most in need.

However, Covid-19 has also served as a catalyst in enabling us to see what are the real priorities for investment, and also the most effective forms of democratic action. The break in business as usual has highlighted what is important in our lives and in society, and also what forms of organisation work – and what don’t.

It has provided a stark lesson in who carries out the really essential work – enabling all to see that, apart from doctors, these are mostly people who receive the least pay. Carers are perhaps the lowest paid workers in the UK – often, effectively, receiving less than the minimum wage once travel time is taken into account – but their heroism is making news headlines. Supermarket workers, cleaners, delivery drivers are all working to ensure that real needs are met.

And, shut in at home, we are forced to rediscover what is important to us – including, especially, the human links with those around us. People who could take basic comforts for granted have learnt to be thankful for a simple bar of soap. We are rediscovering abilities to create our own entertainment – as well as looking for ways to provide practical support to the artists and entertainers in our midst. Our consumer society has slowed down.

Whether this can lead to a more permanent change in priorities will depend on the questions that are asked now. Those of us who have long questioned capitalism’s hold on society have a small window in which we can try and influence the popular narrative. Now, while our society is shaken and not yet resettled, we should be asking why it should continue to be run according to capitalist logic?

Why should we look forward to returning to a social order that is based on the exploitation of those who have to work to live, and perpetuates inequality? Why do we allow those with money to play our world like a giant casino? Why should we allow ourselves to be duped by a system that depends on making us crave more and more things we don’t need – things that can only be produced through the unsustainable plundering of our planet’s finite resources? Why do we tolerate 1800 road deaths and 40,000 deaths from pollution every year in the UK alone, and greenhouse gas emissions that are already creating climate disasters? Why can’t we learn from our observations of the current crisis to refocus our economic system so that no one is left out and developments are aimed towards increasing the common good?

This could only happen with a democratic shift that puts people in charge of running their own communities and neighbourhoods – but Covid-19 can help open our eyes to possibilities here too. Although neoliberals have tried to portray humanity as essentially selfish and individualistic, we are social beings and generally altruistic, so it should be no surprise that so many people have responded to this crisis by organising into community groups and volunteering to help each other. Social isolation has not prevented this social coming together.

The urge to self-organise is partly a response to the need to do something constructive in the face of unmanageable forces, and partly, too, a reaction to the failures of our politicians. The failures of the UK Government can be measured in the death statistics, but the opposition parties are failing to hold them to account too. Even before Labour elected its current acquiescent leader, they had made little effective objection to the government’s laid-back approach to tackling the spread of the virus, and the SNP has been happy to follow an identical line to that taken by Westminster.

Most community organisation has been relatively low-key – bits of help with shopping for those who can’t go out, a bit of (virtual) company for those on their own – but even this creates a vital sense of belonging beyond the immediate practical purpose. And some places have taken community organisation much further. Channel 4 News reported how the villagers of Ballachulish had set up their own Covid-19 alert system and welded together a cleaning station for outside the village shop, and how they were scouring local industries for PPE that could be used by carers and medics, delivering medicines by drone, and blocking off laybys to discourage visiting tourists.

A reordering of values and a reordering of society may seem like impossible dreams, but we can take inspiration from the example of Rojava, the predominantly Kurdish autonomous region of North East Syria, where just such a transformation is being put into action. There, the system of bottom-up, grassroots democracy allows life to be organised as locally as possible, so communities make the decisions that affect their own lives and decide on priorities that meet their common needs. What they have created is not just a different organisational structure, but a different way of approaching life.

This sort of active involvement is demanding, but also hugely rewarding and invigorating. Political action can be seen to make a real concrete difference, and political discussion and education is an integral part of people’s lives, not just something fitted into the odd evening.

Here in the UK, every small local change seems to be accompanied by a top-down survey asking people what they would like to see happen. So many times, the answer is ‘we want more control over our own lives’; but this sort of control isn’t on offer. It isn’t given, it has to be taken. And despite this common wish for a greater say, there is an even more common reluctance to get involved in anything that is regarded as political. We have always had a huge number of community groups and organisations, but these pride themselves on being outwith politics. They play a vital part in holding society together, but, generally, they don’t want to work together to change society for the better.

Even now, many of the solidarity groups that have formed in response to the spread of Covid-19 keep clear of political discussion; but if we don’t attempt to steer politics in a more progressive direction, we will simply lose out to those who would take us the opposite way, who have no qualms about taking the reins in the middle of a pandemic. Plans for the welfare state were being made in the middle of the Second World War, well before it was clear that the UK would defeat Germany. We need to getting ready now if we hope to help shape the post-viral world.