As the Kurds celebrate Newroz, there situation remains as dangerous as their resistance heroic

TODAY the Kurds celebrate Newroz, the Kurdish new year. A momentous twelve months has come to a close, and their fate in the year ahead hangs in the balance. For the followers of the liberational ideas of Kurdish leader and radical thinker Abdullah Ocalan, dangers assail them on every front.

This week has brought us images of the Kurdish-dominated Syrian Democratic Forces celebrating their liberation of the last pocket of Daesh-held land. Their battle against Daesh has cost them thousands of lives, but they know that this victory will not end threats to the very existence of the autonomous Democratic Federation of Northern Syria, where they are putting Ocalan’s philosophy of grass-roots democracy, multiculturalism and women’s rights into practice. Indeed, Turkey wants to deny them even the right to live in this land.

This time last year, Turkey completed its unprovoked invasion of the predominantly Kurdish Northern Syrian region of Afrîn. The majority of Afrîn’s Kurdish population are now refugees. Those who remained have faced violent oppression under a brutal regime controlled by radical Islamic gangs with links to organisations such as Al Qaeda. The lack of international backlash has encouraged Turkey to threaten to invade further and remove the Kurds from the whole area adjacent to the Turkish border. While Western leaders have been forced to give some grudging acknowledgement of the Kurds’ role in ending Daesh’s territorial ambitions, and of the debt owed to them by the rest of the world, they have not guaranteed them their safety. Meanwhile, from the
other direction, Assad has made clear his desire to bring the area back under the full control of the Syrian regime.

Kurds across the border in Turkey face a fascist government that would class every one of them as a ‘terrorist’. Anyone who criticises the Turkish government risks arrest, but Kurds who support Ocalan’s ideas are especially at risk. And they can expect little support from the main opposition parties, who share the government’s Turkish ethnic nationalism. At the end of this month, there will be local government elections, but the progressive pro-Kurdish HDP has been allowed no election broadcast, and its activists face, often violent, harassment. Meanwhile, President Erdoğan attempts to boost support for his Islamist party by feeding religious intolerance and division.

At recent rallies he has broadcast the video made by the far-right terrorist who filmed himself massacring
worshippers in a New Zealand mosque.

For the Kurdish freedom movement, the key to a secure future for themselves and for the wider area lies in a return to the peace negotiations that Ocalan has attempted many times during his twenty-year incarceration in a Turkish island prison. Since the Turkish government abruptly turned their back on these negotiations in 2015, Ocalan’s isolation has increased. He has even been denied visits from his family and his lawyers, against international human rights law and Turkey’s own constitution. As a first step towards the secure progressive future that they seek, Kurds are demanding an end to this isolation; and, because all other roots have failed, they have resorted to the extreme action of an indefinite hunger strike.

Since I last wrote about the Kurdish hunger strike, the protest has gathered storm, so that now over 7000 people have vowed to go indefinitely without food until their demand is met. These include Kurdish groups and individuals around the world, as well as thousands of political prisoners in Turkey, where they can expect to be rewarded with extra harsh treatment.

They include the fourteen hunger strikers I have visited in Strasbourg, where they hope to persuade the Council of Europe to put pressure on Turkey, Imam Şiş in the Welsh city of Newport, and, as of 14 March, three hunger strikers in London. The Strasbourg hunger strikers and Iman are now on their 95th day without food, while Leyla Guven, who began this strike, is on day 134.

On Sunday, I was back in Strasbourg for the third time. Three weeks on from my previous visit the hunger strikers were noticeably thinner and more restricted in their movements. When I hugged my friend Kardo Bokanî in greeting (doctors’ instructions about not touching are roundly ignored) he was hardly there. His eyes have become acutely sensitive to light, so he has to hide behind dark
glasses, or curtained off from the rest of the room, and is unable to read or write without unbearable pain.

Tens of thousands at the celebration of Newroz organised by the HDP in Ahmed, Turkey 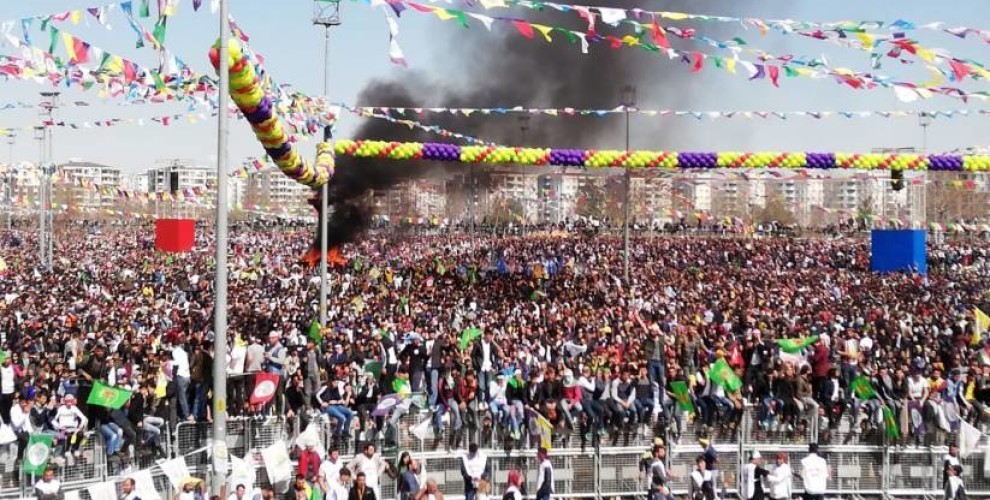 They all now spend most of the day resting in bed, and instead of meeting in the communal space as before, I was ushered into their makeshift dormitories. But despite their bodily weakness, they instil in their visitors a rare sense of energy that comes from their extraordinary commitment and integrity. All the time I was there I only saw one of the many visitors break down in tears, and she was being comforted by a smiling Deniz Sugut, one of the hunger strikers.

And they still have plenty of energy to talk. I had long discussions with Yuksel Koç and Mustafa Sarikayai, who were both anxious to spell out the universal importance of Ocalan’s philosophy for democracy, multiculturalism, ecology and women’s rights – and especially his vital role in enabling Kurds to take pride in their culture and resist the government’s relentless attempts to portray them as backward people who could only be accepted by becoming Turks.

The lack of mainstream support, or even notice, of the hunger strikers has been shocking. And those who know of the hunger strike are still unlikely to be aware of how much it has grown. There has been support from some leftist politicians, but other parties remain largely unmoved. When Kurdish women tried to join the Strasbourg women’s’ day march with a large banner of Leyla Guven, they were told by the organisers they were not wanted – though in most places the problem is ignorance rather than negativity. The failure of the wider world to respond to their protest has made the hunger strikers embarrassingly grateful for any support.

This is, anyway, a community with a traditional sense of the importance of hospitality – they were shocked I was staying in a hotel and not in one of their homes, though I needed to be close to the 6am bus back to the airport – however the warmth with which I was welcomed as a returning visitor was truly moving. They have a culture of scarf giving, and many of their Kurdish guests bring the hunger strikers scarves as presents.

Several of these were passed on to me. Perhaps I should also be using them as presents for others, but they are important mementos of my friends. Of course my visits are personal as well as political, but if I had any doubts about making the journey yet again, they were quickly dispelled.

Real support needs to be continuous, not a one off – and they have all seen and appreciated my articles in Commonspace and the National because there are simply not enough people writing about what is happening.

Yesterday, though, there was cause for hope that this powerful and desperate action might be beginning to reach a wider audience, when Wales became the first state to give public support to the hunger strikers and their rights-based demand. In putting forward the motion to the Welsh Assembly, Delyth Jewell of Plaid Cymru described her visit to the Welsh Kurdish hunger striker, Imam Şiş, as ‘life affirming’. Might the SNP learn from Plaid’s example?

Ocalan inspired the Kurds to take the Newroz celebrations out of the home and transform them into public demonstrations of Kurdish culture, and unified actions for strengthening resistance to forced assimilation and oppression. His ideas, and their living incarnation in Northern Syria, can inspire us all with the belief that another world is not only possible but beginning to be created: so let’s extend the spirit of Newroz beyond the Kurdish community to a universal call for resistance to oppression, beginning with support for the Kurdish hunger strikers.