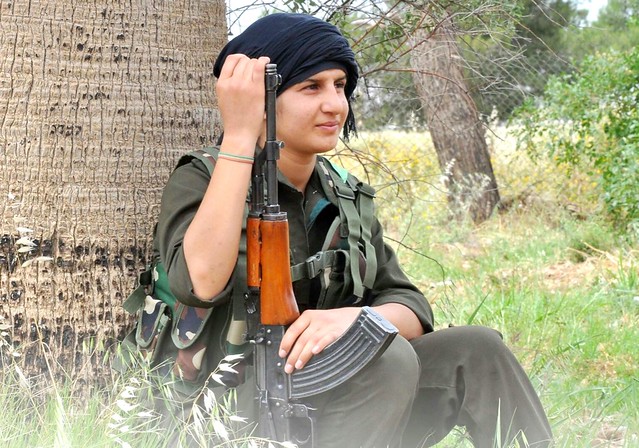 Sarah Glynn of Scottish Solidarity with Kurdistan says that while all eyes are on Iran, Turkey massing troops on the Syrian border spells real danger of an extension of its war on the Kurds, in a region where many external powers are jockeying for control

LAST Friday [19 July] was the seventh anniversary of the Rojava revolution, when the Kurds established autonomous control in northern Syria.

For almost the entire time that they have been building an alternative society, based on a feminist, multicultural, grassroots democracy, they have also had to fight for survival against external attacks. Now, again, their Democratic Federation of North East Syria faces existential danger.

While many eyes are on Iran, sparks are already flying in this part of the Middle East tinder box. Turkey has been massing its troops on the Syrian border, and every day there are reports of Turkish cross-border attacks on Kurdish villages.

On Monday, Turkey told the US envoy visiting Ankara that they were ready for a full-on attack if the US didn’t make Kurdish troops leave the areas next to the Turkish border and didn’t take back the heavy weapons they had given to the Kurdish-dominated Syrian Democratic Forces (SDF) for the fight against Daesh. Of course this is a bargaining position – Turkey is wary of pushing the US so hard that they impose their threat of sanctions and further damage the country’s already fragile economy – but the danger is very real.

It is a well-established truism that a regime in domestic difficulties may seek to unite people behind it by turning them against an external enemy. Turkish President Recep Tayyip Erdoğan is presiding over an economy in recession, and his political allies are publicly deserting him following his party’s election losses, so the temptation to take his attack on the Kurds onto a new level may be too great to resist.  Every attack on the Syrian Kurds also feeds his imperial ambitions and supports his aim of making Turkey a regional super-power.

READ MORE: ‘Women Life Freedom!’: What I found on my visit to the Women’s revolution in Northern Syria

In this part of the world, many external powers are jockeying for control – all for their own selfish ends. Turkey has taken on high-risk stakes by attempting to play the US and Russia off against each other. Despite their membership of NATO, they have ignored US threats and bought Russian missiles (hence the US sanctions threat). Could Turkey’s new friendship with Russia translate into a deal that leaves them free to attack the Syrian Kurds in exchange for abandoning their jihadist allies in Idlib?

Although this would be a further invasion of Syrian territory, the Kurds can have little expectation of help from the Russian-supported Syrian regime. They have tried to negotiate with Damascus, but, as Assad regains control over the rest of Syria, he will feel even less ready to tolerate an alternative system of power within Syria’s borders, and the loss of some more land to Turkey might seem a relatively small price to pay.

The Assad regime has always alienated the Kurds, even to the extent of denying them citizenship, and their current lack of sympathy is demonstrated by their blockade of the Kurdish Shehba region. This geographically isolated, war-damaged, and impoverished canton is providing a home for the bulk of the refugees who escaped the Turkish invasion of Afrin, the most Western part of Kurdish Syria. Even trucks of vital medical supplies have to pay large sums to the Syrian government before they are allowed to pass into Shehba, and many people have died because ambulances are not allowed out to Aleppo, nor doctors allowed in.

But to return to the Turkish aggression, their attack on the Kurds is not restricted to the Syrian front, and Turkish jets have been bombing the mountains of Southern Kurdistan/Northern Iraq for months. They have been doing this with the explicit help of the Kurdish Regional Government (KRG). The autonomous Kurdish part of Iraq is officially, though not actually very democratically, controlled by the Kurdistan Democratic Party (KDP). Economically neoliberal, and socially and politically feudal, the KDP has kept this oil-rich region as the fiefdom of the Barzani clan. They have no sympathy with their fellow Kurds in Turkey and Syria who follow the ideas of Abdullah Ocalan, and, instead, regard Turkey as a key friend and trading partner. The KRG enforces a boycott on the Democratic Federation of North-East Syria, and the KDP’s sister party within North-East Syria organises against the new democratic structures and has worked with the Turkish occupiers in Afrin.

Most of the Kurds in the Iraqi mountain villages are supporters of Ocalan, and it is here that the PKK guerrillas have taken refuge. Turkish raids are ostensibly against PKK bases, but they attack civilians without discrimination, and last week they also hit the refugee camp of Maxmur.

Turkey has continually rebuffed PKK attempts to negotiate a peaceful settlement that would allow the Kurds in Turkey to live with dignity and security, and insists on pursuing a violent solution to the Kurdish Question. Meanwhile, the focus of the PKK has been the fight against Daesh – most notably when they saved thousands of Yazidis trapped on mount Sinjar after the KDP’s Peshmerga had fled.

While Barzani and the KRG turn a deaf ear to the cries of their fellow Kurds, the rest of the world –  if it registers what is happening at all – is happy to file the Turkish attacks on the Kurds in the Iraqi mountains under ‘war on terror’.

Turkey provided a safe conduit for foreign fighters to join Daesh, and has allied with and supported some of the most brutal and thuggish jihadi groups, including former Daesh fighters. Their invasion of the once-peaceful Kurdish canton of Afrin saw it turned over to gangs that combine a stark Islamism with looting and kidnapping, and this could be repeated in these other areas. Meanwhile, the Kurdish fighters have formed the vital bulwark against Daesh. But, although they have liberated the last piece of Deash territory, the danger remains. Sleeper cells can come out of hiding, and there are still the many prisoners that the Kurds are expected to guard. A major Turkish attack on the Kurds could make space for Daesh to root down and grow again.

Very little of all this is covered in the UK media, but what is happening to the Kurds in Syria and Iraq has an importance way beyond those immediately affected. The Kurdish movement has provided the most significant resistance to the growing fascism that is spreading over so many parts of the world. And they have not only defended themselves against the increasingly fascistic Turkish state, the clerical fascism of Daesh, and the Arab nationalist Assad dictatorship, they have also given us all a positive alternative system to campaign for.