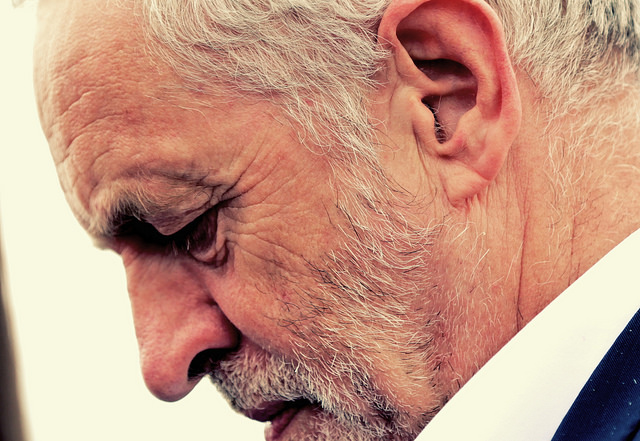 Sarah Glynn, founding member of Scottish Jews Against Zionism (not a member of any political party), argues that the Israeli government and Zionist zealots in the UK are attempting to utilise an artificial anti-Semitism row to undermine Jeremy Corbyn’s leadership of the Labour party and as a deflection mechanism to shield the Israeli state from criticism

IN 1924, four days before a general election, a forged letter purporting to come from Grigori Zinoviev, Chairman of the Communist International, was published in the Daily Mail. Almost certainly ‘leaked’ by MI6 or MI5 to the Conservative Party, the letter was used to implicate the Labour Party in a communist conspiracy orchestrated from Moscow.

It is, of course, impossible to know how much this letter may have influenced voters, but the short-lived first Labour Government was replaced by the Conservatives. In this case fake foreign interference was used by the British establishment to attack the electoral chances of Labour socialists.

Today, despite much-debated and publicised worries over Russian interference in other countries’ elections, a genuine and blatant interference in British politics is being carried out by a foreign government and its supporters almost without comment. Israel and its Zionist friends are attempting to sabotage the possibility of a left-wing Labour Government at Westminster, and the neo-liberal establishment is content to let them do it. Although this foreign interference is real, the story they are putting out about Labour anti-Semitism is almost as fake as the Zinoviev letter. Like that letter, it provides a possibly fatal weapon against Labour socialism.

Jeremy Corbyn has been a consistent and long-term campaigner against racism of all kinds. This is a consequence of the same passion for fairness that has led him, and others on the left, to champion the Palestinian cause. That, in Israel’s eyes, makes him an enemy. The need to escape from anti-Semitism provided the justification for Israel’s foundation, and now any questioning of the actions or nature of the Israeli state is dismissed as the product of a new anti-Semitism. So we have the absurd situation of a politician whose anti-racist credentials are probably second to none, being hounded by accusations of anti-Semitism, even from the likes of the Daily Mail.

READ MORE – Rhea Wolfson: I’ve been a victim of anti-Semitism – Labour is doing the right things to stamp it out

All those who regard Labour’s leftwards trajectory under Corbyn as a danger to their position in the ill-divided status quo, have been gifted a stick to beat him with – including those on the right of the Labour Party who would appear to prefer continued Conservative government to seeing the Labour leader become Prime Minister.

The apparent absurdity of the latest accusations against Labour is itself an illustration of their fundamentally political nature. Labour under Corbyn is constantly being required to prove itself not guilty of anti-Semitism and demonstrate it has purged every possible anti-Semite from the party. In this it is unique, despite that fact that there is no evidence that there is more anti-Semitism among Labour members than in other parties – in fact, quite the contrary.

In order to root out anti-Semitism, Labour had to define it – though arguably anti-Semitism shouldn’t need a separate definition from other forms of racism. Zionists have pushed the International Holocaust Remembrance Alliance definition of anti-Semitism, which consists of a brief, somewhat vague, definition and accompanying examples. Labour has adopted the definition but – after careful consideration – has made some alterations to the examples. These alterations add clarity and strength. They also aim to ensure that anti-Semitism is not confused with criticism of Zionism – and this has acted as a trigger for the most concerted assault on Labour yet.

READ MORE – Paul Spicker: Antisemitism – If you think this article is about Israel, think again

In a fit of hyperbole, three Jewish papers have combined to frame a Corbyn government as an “existential threat to Jewish life”. The political motivations behind all this become even clearer when we can see that the Conservative Party, which is demonstrating little concern with the Palestinians’ plight, has not been subject to similar (or any) scrutiny. No-one seemed bothered that they only added a (brief) reference to the IHRA definition to their own rule book a week ago, after Channel 4 News had noted that Conservative Party rules included no express mention of anti-Semitism at all.

Zionism is a political movement, and although, since the Holocaust, the majority of Jews have been sympathetic to the concept of a Jewish state, there have always been differences between Jews over support for Zionism. Not all Jews support Zionism, not all Zionists are Jews, and some of Zionism’s fiercest critics are themselves Jewish. To imply that all Jews share a political outlook by virtue of their Jewishness is actually an example of anti-Semitic stereotyping.

In Scottish Jews Against Zionism we understand the concept of a ‘Jewish state’, or any state defined by ethnicity or religion, as inherently discriminatory and racist. According to one of the IHRA examples that Labour took care to omit, that statement could be enough to brand us anti-Semitic.

Although these arguments may seem so absurd as to be trivial, their implications could be disastrous. Anyone who cares about a progressive future must be concerned about these attacks on Labour – however critical we may be about some of the party’s past actions and their approach to Scotland.

By restricting freedom of speech and political debate, Zionist zealots have further marginalised Palestinian voices and made it harder to reach a political settlement in the Middle East. In attacking Corbyn and the Labour Left they could be making the crucial difference that forces the UK to suffer a perpetuation of rapacious neoliberalism and Tory austerity. And, in a final irony, without a left-wing Labour government in the UK, determined to address the inequalities on which racism thrives, genuine anti-Semitism can be expected to increase. If Jewish institutions can be seen to be in any way responsible for all this then that anti-Semitism could be worse.

The Zionists and the anti-socialists are playing a very dangerous game.