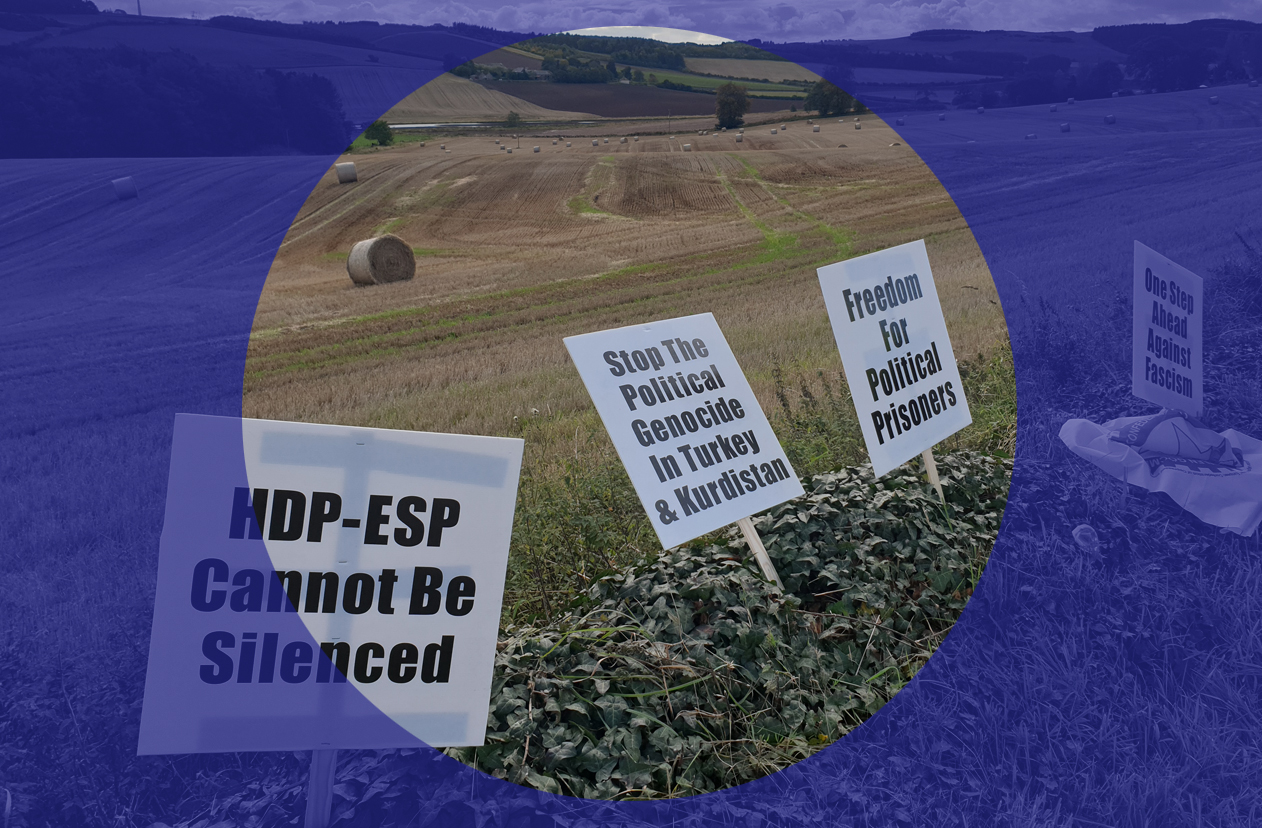 “Although their struggle has gone on for decades, the Kurds hardly featured in most people’s political understanding before they spearheaded the territorial defeat of ISIS.”

ON WEDNESDAY MORNING, six people set off from Dundee to walk the sixty0odd miles to the Scottish Parliament in Edinburgh, where they will finish their journey with speeches at 2pm on Friday. Their walk is in a long tradition of protest marches, and specifically of protest marches to raise awareness of the Kurdish freedom movement and of oppression by the Turkish state; but it is the first march for these issues in Scotland.

It is a response to what Kurds have described as political genocide, and follows a further turn of the screw in the century-long history of repression in Turkey: repression of Kurds and other minorities, repression of progressive politics, and repression of democracy.

On 25 September, arrest warrants were issued for 82 members of the leftist pro-Kurdish Peoples’ Democratic Party (HDP), including a co-mayor and former MPs. 17 people have been detained in custody following a court order made last week. The detained politicians join a very long list of HDP members who have fallen foul of Turkey’s deeply politicised judicial system. In the last five years, some 16,000 have been detained and 5,000 imprisoned; and those currently behind bars include dozens of deposed mayors and seven MPs. Of the 65 municipalities won by the HDP in March 2019, 48 have had their elected mayors removed and replaced by a government-appointed trustee, and a further six mayors have seen their election annulled.

This assault on democracy should be raising alarm bells in national parliaments everywhere, but among mainstream parties who like to regard themselves as exemplars of the democratic system, it has received barely a mention. It is not being discussed inside our parliamentary chambers, so activists must raise it outside.

The marchers – one woman and five men – are representatives of three community groups: the Kurdish Community Centre Scotland, the Union of Refugee Families of Turkey and Kurdistan, and Dundee International Workers’ Centre. They want to draw attention to the very many actions by the Turkish government that have attacked hopes for peace and democracy – including the 21-year imprisonment and isolation of Kurdish leader, Abdullah Ocalan. Their banners – which have been met with supportive horns from passing drivers – call for freedom for political prisoners, for a stop to political genocide in Turkey, and for freedom for Ocalan. They highlight the attack on the Socialist Party of the Oppressed (ESP), which acts under the HDP umbrella and had 17 members arrested in September and a further 19 on the day the marchers left Dundee. And they call for people to stand up to fascism.

Although their struggle has gone on for decades, the Kurds hardly featured in most people’s political understanding before they spearheaded the territorial defeat of ISIS. Now the world knows of their key role in the defence against those forces – and of their betrayal by the United States and their coalition partners. What is much less well known, is that the Kurds and their leftist allies are fighting a similar defence within Turkey against the Turkish state.

The accusations being made against the HDP in these recent arrests are based on their call for protests at the time of the ISIS attack on Kobanî, when the future of Syria’s Kurds hung in the balance. Turkey, which had been the main conduit for foreign fighters joining ISIS and the main market for ISIS to sell oil, prevented Kurds in Turkey from crossing the border to help in Kobanî’s defence, and made it clear that they welcomed an ISIS victory.

You won’t hear it much discussed by politicians, or the mainstream media, but Turkey is well down the fascist road. Under the prime-ministership, and now presidency, of Recep Tayyip Erdoğan, Turkey has combined its long-established ethnic nationalism with an increasingly intolerant form of Islamism, whipping up religious hatred and ethnic prejudice to win popular support. Any criticism of the government is met with severe punishment. Prisons are full of journalists, community activists, academics and lawyers, and when the government responded to the pandemic by releasing common criminals and mafia bosses, political prisoners were left in insanitary incarceration. And even after decades of oppression, Turkey continues to find new ways of persecuting the Kurdish population. Last month, two Kurdish villagers were dropped from a flying helicopter.

This brutality within Turkish borders is matched by imperialist aggression in the surrounding region, inspired both by a need to distract attention from a troubled economy and falling government popularity, and by ambitions to create a neo-Ottoman empire. Turkey’s imperial ambitions are pursued through a combination of ultra-modern drones and unsophisticated gangs of mercenary fighters, who are driven by a lethal cocktail of religious fanaticism and desire for money and plunder. Many of these men previously fought with ISIS or groups related to Al Qaida, and they show no empathy towards the people who live in the areas that they have captured. Turkey has invaded northern Syria and threatens to take this invasion further. They are bombing northern Iraq. They are intervening in Libya, South Yemen, Mali and the Eastern Mediterranean. Their brutal proxies, who have made a lawless gangland of the areas they captured from the Syrian Kurds, are now being dispatched to fight for Azerbaijan in Nagorno-Karabakh. And the Turkish Government actively attempts to propagate its intolerant religious and ethnic nationalism within the Turkish diaspora in Europe and elsewhere.

It seems extraordinary that such a destructive force should be allowed to grow unchecked – except for the Mediterranean venture, which posed an immediate threat to European oil interests. Upsetting Turkey does not serve European short-term interests, and dangerously uncritical reporting is defended as ‘unbiased’. Turkey is still regarded as an important trading partner and purchaser of European arms.

Our modern society doesn’t seem to have learnt the lessons of history – and so, as on so many occasions in the past, we need political activists to jolt the professional politicians into action. The Coronavirus has provided cover for authoritarian regimes, and curtailed our ability to protest, but – as has been increasingly shown – there is still a lot that we can do. When this small group of marchers reaches the Scottish Parliament on Friday afternoon, they would welcome (physically distanced and masked) support. And even from the safety of our homes, we can all help to ensure that, this time, people are aware of what is happening, and our politicians cannot look away.

Sarah Glynn is Co-convener of Scottish Solidarity with Kurdistan.