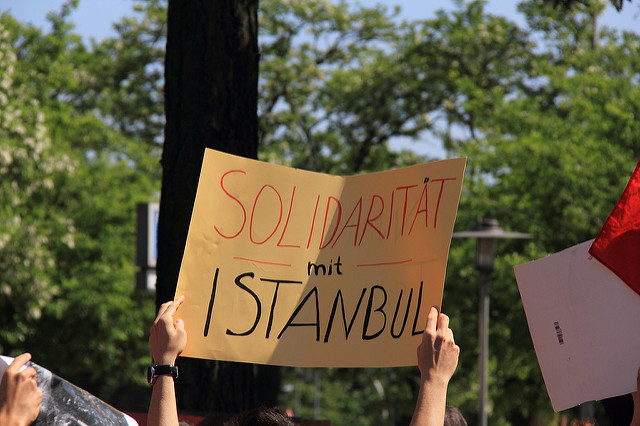 YESTERDAY’S [31 March] Turkish election may only have been for regional control, but the one thing on which everyone is agreed is its importance. Although President Erdoğan was not himself up for election, he put himself at the centre of the campaign, with a frenetic programme of election rallies that demonstrated his belief that the vote is a referendum on his leadership.

And although the state news agency put the alliance of which his Justice and Development Party (AKP) is part on 51.7 per cent of the vote on a 84.5% turnout, the Turkish people have overcome a hugely biased electoral environment to deal him a blow. The main opposition Republican Peoples Party (CHP) is set to take control of major cities, including the capital, Ankara. And while the Istanbul vote is still disputed, it looks as though Erdoğan will regret his public linking of control of Istanbul with control of Turkey.

It was as mayor of Istanbul that Erdoğan began his own rise to national leadership, and both Istanbul and Ankara have been controlled by his party for a quarter of a century. In both cities, the winning margins were extraordinarily close, and the opposition win was only possible because the pro-Kurdish leftist People’s Democratic Party (HDP) made a strategic decision not to stand outwith their strongholds in eastern Turkey but to call, instead, for their supporters to cast their votes against the increasingly fascistic government.

While the HDP strategy proved the deciding factor in many key battlegrounds, it was able to succeed because the collapse of Turkey’s neoliberal economy had left the AKP vulnerable. When Erdoğan brought forward the date of the last general election, this was seen as a move to pre-empt the fallout of economic failure. Now economic factors weigh heavily. The value of the Lira has plummeted and the economy has gone into recession, with high unemployment and high inflation, especially of food prices.

Erdoğan’s reaction to this failure is to blame it on Turkey’s enemies – both external and domestic – and to attempt to reframe the situation as a struggle for national survival in which he and his AKP are leading the defence of both Turkey and Islam. (The US attempt to further weaken Turkey’s already struggling economy actually fed into this narrative.) Erdoğan told an Istanbul rally on Saturday: “I want you to use your votes to give a lesson to all the enemies of our flag and our call to prayer, to all those who target our independence and our future.” To drive home his point, he has added dangerous fuel to his rhetoric by repeatedly showing the video made by the extreme-right terrorist in New Zealand as he murdered worshippers in the Christchurch mosques.

For more progressive politics one has to look to the Kurdish regions of Eastern Turkey, where the pro-Kurdish HDP stands on a platform based on Abdullah Ocalan’s ideas of democracy, multiculturalism, ecology, and women’s rights. Although the HDP operate entirely within the political system, Erdoğan refuses to regard them as separate from the Kurdish guerrillas fighting what they consider to be Turkish internal colonialism, whom the President has branded terrorists. Repression of Kurdish identity is common across the main political parties, so the HDP’s strategic support for the CHP alliance was a measure of the need to resist Erdoğan’s rule.

READ MORE: Explainer: What happened during the failed Turkey coup and what happens next?

For half a century, pro-Kurdish politicians in Turkey have faced imprisonment or even death. The first expressly pro-Kurdish party dedicated to electoral politics was established in 1990. Despite repeated, often violent, suppression and re-establishment under different names, support grew. Pro-Kurdish parties won control of local councils, where their progressive changes included backing for Kurdish culture and women’s rights and the establishment of grassroots democratic structures. Growing support at a national level allowed the HDP to win 80 parliamentary seats in the June 2015 election and so deprive the AKP of an overall majority – triggering renewed attacks on party members and organisation.

The attempted coup of 2016, blamed on Erdoğan’s former ally, Fethullah Gülen, has been used as an excuse to clamp down on all opposition, with the axe falling especially heavily on any form of Kurdish organisation and on freedom of speech. Of all the world’s journalists who have been imprisoned, one-third are in Turkey, and the remaining press self-censors any criticism of the government. The HDP was allowed no mainstream media coverage for its election broadcasts.

Since August 2016, the Turkish Government has removed and arrested nearly every one of the elected co-mayors in the Kurdish east (their progressive politics calls for a man and a woman sharing each leadership post), and replaced them with appointed ‘trustees’, who have shut down services for Kurdish culture and for women, and packed the bureaucracies with AKP supporters. The HDP campaigned to get control back under the slogan ‘It’s ours’, while Erdoğan has promised to repeat his actions with any councils they win.

Under such circumstances no election can be considered ‘free and fair’, and that is before additional hurdles and intimidation on election day itself. Steve Sweeney covered Turkey’s constitutional referendum for the Morning Star. He described to a recent meeting in Glasgow how the authorities counted unstamped ballots, and critical outside observers were dismissed as ‘terrorists’. And he told us that for the following election, in every polling station he visited in the Kurdish area of Van, voters had to cast their ballot under the watchful eye of a soldier with a rifle. English MEP Julie Ward, who went as an observer to that election, also recorded intimidating military and lack of facilities for people to vote in secret.

Last week, Sweeney was arrested and held at the airport, before being sent back to the UK unable to report on what was happening, and international observers were also sent packing. An Islamist opposition party claimed that two of its supporters were shot dead at a polling station on Sunday by a relative of the AKP candidate after they objected to being made to vote openly.

Today the HDP is celebrating winning back many of the municipalities that were taken from them. The AKP may be crowing that they have not won as many as last time, but in the intervening five years the area has been under repeated attack from the Turkish state, so that many places are effectively a war zone. The HDP is contesting the discounting of large numbers of votes in ballots with close results, and as Fayik Yagizay, the HDP representative at the Council of Europe explained to me, the Turkish government gerrymandered the results by registering large numbers of police and military to vote in key districts.

One might ask what the HDP hopes to gain contesting the elections at all in such circumstances and knowing what could happen to those that win. But it is important to look beyond this election at the bigger struggle. Then we can see how the movement based on Ocalan’s ideas is growing in strength and winning wider support. Fayik was in no doubt of his party’s historic role in these elections, claiming this would give more courage to the democratic forces to stand up to the fascists.

For the HDP, the election has to be understood alongside the massive Kurdish hunger strike, started by HDP MP Leyla Guven, and the construction of a new social and political system across the border in Northern Syria.

If you want to support the Kurdish struggle for a peaceful future for Turkey, please send a letter in support of the hunger strikers.