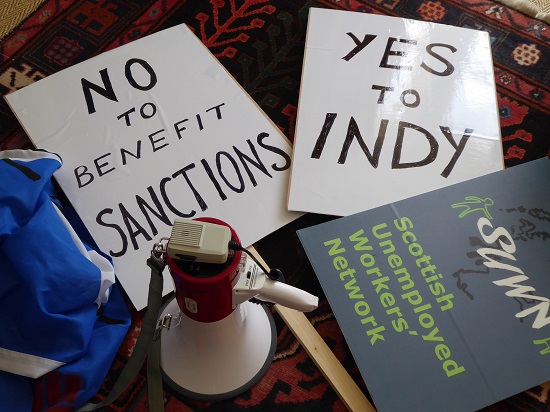 FOR those struggling to survive on diminishing benefits or otherwise dependent on our ravaged welfare state, independence can’t come soon enough.

There is good reason why welfare has been a recurrent theme at indy rallies; and the Scottish Unemployed Workers’ Network will be as active in this campaign as we were in the last.

But we can’t help being concerned – along, I suspect, with other grassroots activists – that the prospect of an escape from Tory Britain in the not too distant future will distract people from taking on the daily attacks on our welfare state that are destroying lives and families in the here and now.

We can’t help being concerned that the prospect of an escape from Tory Britain will distract people from taking on the daily attacks on our welfare state that are destroying lives and families in the here and now.

While it might be unfair to claim that a section of Scotland is waiting for the first minister to ride in with the cavalry and drive our current problems away, the sense of urgency and need for action is certainly blunted.

This has serious implications, both for the people feeling the full force of ‘welfare reform’, and for the strength and success of the independence campaign. Moreover, if we do win this referendum, the focus of our activity now will affect the direction of our newly independent nation.

If we want the new Scotland to be a harbinger of social justice, then issues of social justice must be at the heart of our independence campaign; not just in our rhetoric, but in our actions, too.

We really do need to act as though we live in the early days of a better nation in order to ensure that genuine fairness and decency become such a fundamental part of public consciousness that no future Scottish elite can cast this aside without fear of the consequences.

Practical grassroots activism makes tactical sense too. Successful political movements build support by demonstrating their relevance; by showing that they care and can get things done. They get involved in the hard work of helping to unravel the problems that encumber people’s lives.

Besides giving practical assistance, we need to publicise and protest every draconian rule that comes from Westminster and make it as hard as possible for these to be implemented.

They listen and learn and involve people, and together they develop a greater understanding of the underlying causes of the current condition, and of the political solutions that will stop the problems from happening in the first place.

The political manoeuvrings between Holyrood and Westminster have placed us in a kind of phoney war where many people are not ready for full-on referendum campaigning. But the need for action around welfare issues is growing ever more acute, and when this is combined with analysis, such action can provide the best argument for independence.

Besides giving practical assistance, we need to publicise and protest every draconian rule that comes from Westminster and make it as hard as possible for these to be implemented. And we also need to keep up pressure on our own Scottish Government to make the best use of the limited powers it already has – in order to minimise suffering, to show that there can be a fairer way of doing things, and to show why we need the full powers that can only come with independence.

As people gear up for the independence campaign proper, many are asking what answers should we give on the doorstep. We can never know in detail how an independent Scotland will be. What we can know, and attempt to demonstrate, is what it could be. For this we can’t depend only on abstract argument. We need practical involvement to win trust and raise expectations.

For those of us active in resisting the attack on the unemployed and disabled, this involvement combines different forms of action. First, there is the bread and butter of practical assistance to make people aware of the rights they do still have and to ensure these are respected.

Successful political movements build support by demonstrating their relevance; by showing that they care and can get things done. They get involved in the hard work of helping to unravel the problems that encumber people’s lives.

We run weekly stalls outside of a jobcentre to reach people who won’t make it to office-based agencies, or are not aware that they can refuse to accept some of the treatment that is being meted out to them.

Then we also publicise the cruelties of the increasingly punitive ‘welfare’ system through all forms of media and public protest, including direct action, and we engage in every opportunity to influence Scottish Government policy through consultations and letters.

At the same time, we need to look beyond protecting past gains from the scythe of austerity, and put forward an alternative programme based on a completely different way of doing things. Independence would leave Scotland free to replace a system that relies on means testing and the policing of people’s lives and actions, with a Universal Basic Income for everyone.

A Basic, or Citizen’s, income would open possibilities for involvement in activities that aren’t currently rewarded financially, but are essential for a healthy society. Ideas like that need to be properly worked out and argued over. We need to invest time and thought into building a credible vision for an independent Scotland that is manifestly worth fighting for.

(The Scottish Unemployed Workers’ Network has published a book of its actions and ideas with Common Print.)