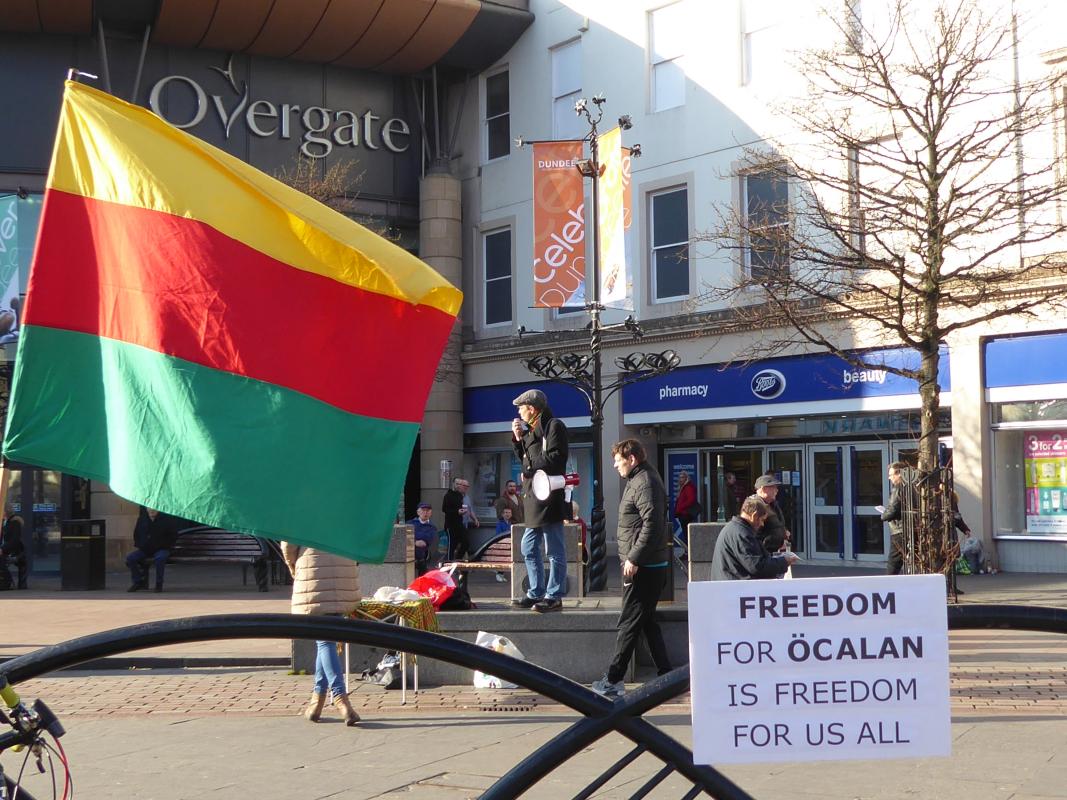 On the 20th anniversary to the day since Kurdish liberation leader Abdullah Öcalan was abducted and imprisoned in Turkey, Sarah Glynn of Scottish Solidarity with Kurdistan explains why the protest movement internationally to end Öcalan’s isolation is rising, including demonstrations in Edinburgh, Dundee and Glasgow this week

THE call of ‘Freedom for Öcalan!’ is being heard on Scottish streets. On Thursday [15 February], the Edinburgh Kurdish Community Centre organised a march. Today, there was a protest in Dundee. Tomorrow, the call will go out from Glasgow’s Buchanan Steps (from 1pm). We are commemorating an important anniversary at a time when the Kurdish future has become a central battleground of world politics.

20 years ago, on 15 February 1999, Kurdish leader, Abdullah Öcalan was abducted in an operation led by the CIA and taken back to Turkey. His original death sentence was commuted to life imprisonment when Turkey ended the death penalty in order to be considered for EU membership. Since that date he has been held in the closely-guarded island prison of Imrali. In recent years he has been kept in total isolation, denied even visits from his family and his lawyers.

One hundred days ago, Kurdish politician Leyla Güven began an indefinite hunger strike with the single demand of an end to Öcalan’s isolation. That isolation contravenes Turkey’s own constitution as well as international law on human rights. Now over 300 Kurds have joined Leyla on indefinite hunger strike, including fourteen hunger strikers in Strasbourg and Imam Şiş in Wales, who have all reached day 61. Most of the hunger strikers are political prisoners who are treated extra harshly. All these people are putting their lives on the line because other forms of campaigning have left the world unmoved.

READ MORE: Meeting with the Kurdish hunger strikers in Strasbourg

These events will be marked by Kurdish communities across the world, but they also have a much wider significance. So, what is the history behind them, and why has the call of ‘Freedom for Öcalan’ echoed way beyond its Kurdish origins? This is a campaign that has been taken up by Unite, the GMB, and other unions, and has been endorsed by the TUC and STUC. Its importance was recognised by last year’s Durham Miners’ Gala – the biggest trade union gathering in the UK – when they chose it as their international cause.

First, a bit of background. The republic of Turkey is founded on an ethnic Turkish nationalism that allows no room for the expression of other identities. The large Kurdish minority have found themselves subject to brutal attempts at Turkification, which have outlawed their language and culture and repeatedly subjected them to devastating collective punishments. In 1978, a group of Kurds felt that the wider leftist movements, of which they were part, failed to understand the importance of this cultural suppression, and they established their own Kurdistan Workers’ Party (PKK), under Öcalan’s leadership. The PKK started out as a Marxist-Leninist liberation movement, and in the 1980s and 90s, until Turkey forced the Syrian government to expel him in 1998, Öcalan was based in Syria.

Politically, the party has moved on from both its strict marxism and its demand for a separate Kurdish state. They now espouse local autonomy and cultural freedom, under the heading of democratic confederalism. Before his total isolation, Öcalan took a central part in developing this new approach. His prison writings have provided vital inspiration to the progressive social changes that have been put in place in the autonomous, predominantly-Kurdish area of northern Syria, and that the Kurds also attempted to establish in Eastern Turkey before being brutally crushed by the Turkish army. Central to these changes are grassroots democracy, secular multiculturalism, and women’s rights.

READ MORE: ‘Women Life Freedom!’: What I found on my visit to the Women’s revolution in Northern Syria

Everyone who hopes for a better world and has been inspired by the living example of northern Syria must want to see the freedom of its main architect. For millions of Kurds, Öcalan is not only their acknowledged leader, but a vital symbol of their desire for freedom. And he is widely recognised as the person who has the support, the will and the ability to negotiate a peaceful settlement, if and when the Turkish government agrees to engage. Indeed, he has made many attempts to do this over the last 20 years.

Moving away from round numbers, 29 years and four days ago, we watched Nelson Mandela walk free. Just as Mandela was critical to ending apartheid, so Öcalan is critical to peace in Turkey.  While the PKK, like Mandela, has fought a guerrilla struggle, their ideas have also been pursued through constitutional politics. However, even the predominantly-Kurdish Peoples’ Democracy Party (HDP), which keeps firmly within the legal framework, has faced constant harassment and violent physical attacks from the Turkish state – and has seen most of its MPs and mayors arrested. The situation is only getting worse as Turkey slides deeper into fascism.

Many European governments were accused of complicity in Öcalan’s abduction 20 years ago. Today they are desperate to keep Turkey within NATO and to bribe Turkey to keep would-be refugees and migrants out of Europe. They are anxious to make billions selling Turkey arms; and Germany has even been acting as Turkey’s policeman and clamping down on Kurdish activists and protests in German cities.

Through our protests we want to make more people aware of the importance of Öcalan and the Kurdish movement, to show our support for the Freedom for Öcalan campaign, and to put pressure on the UK government to get the Council of Europe to act.

As Antonio Negri has said, “Öcalan is a prisoner who is becoming mythical, as Mandela in the twentieth century, so he in the twenty-first. He expresses a series of concepts that in the 21st century are increasingly becoming the building blocks for the political construction of a new world.”

If you aren’t able to get to any of our protests but would like to show your support you can photograph yourself holding our ‘Freedom for Öcalan is Freedom for Us All’ banner, and send it to scottishsolidaritywithkurdistan@outlook.com for our blog.

Protesting in Dundee on the 20th anniversary of Öcalan’s imprisonment 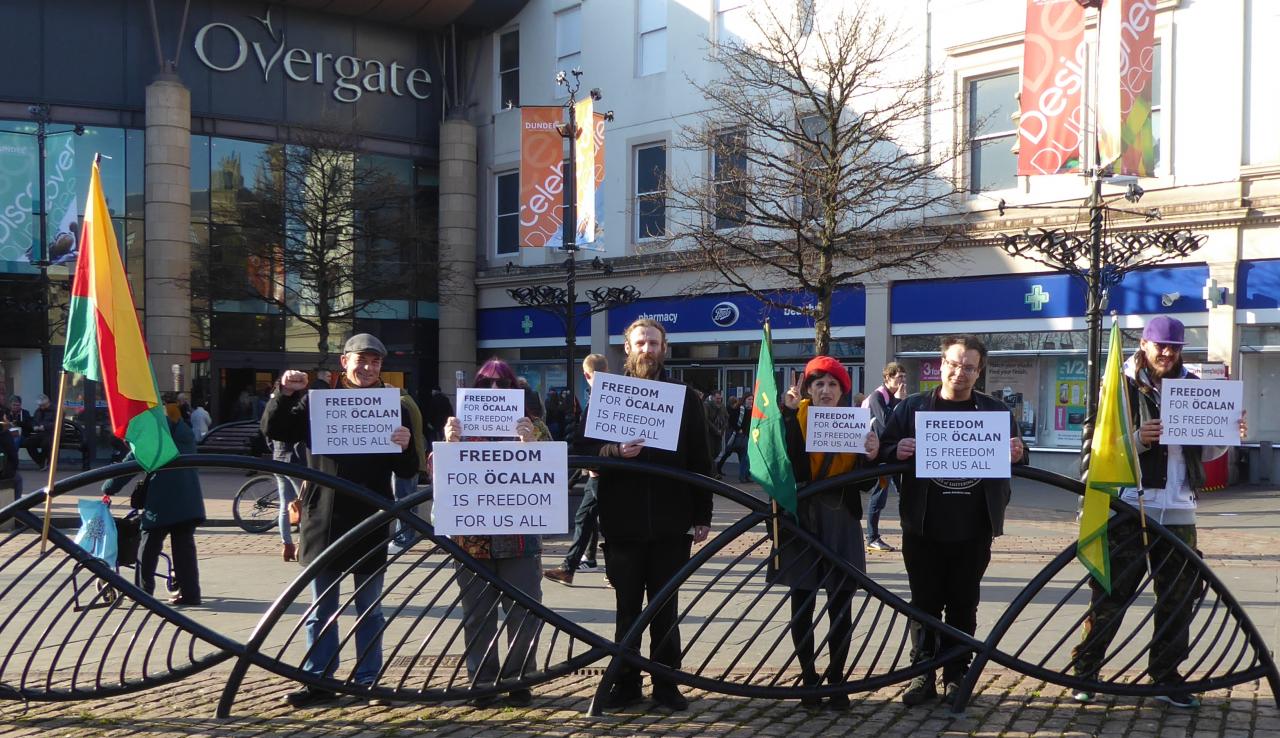 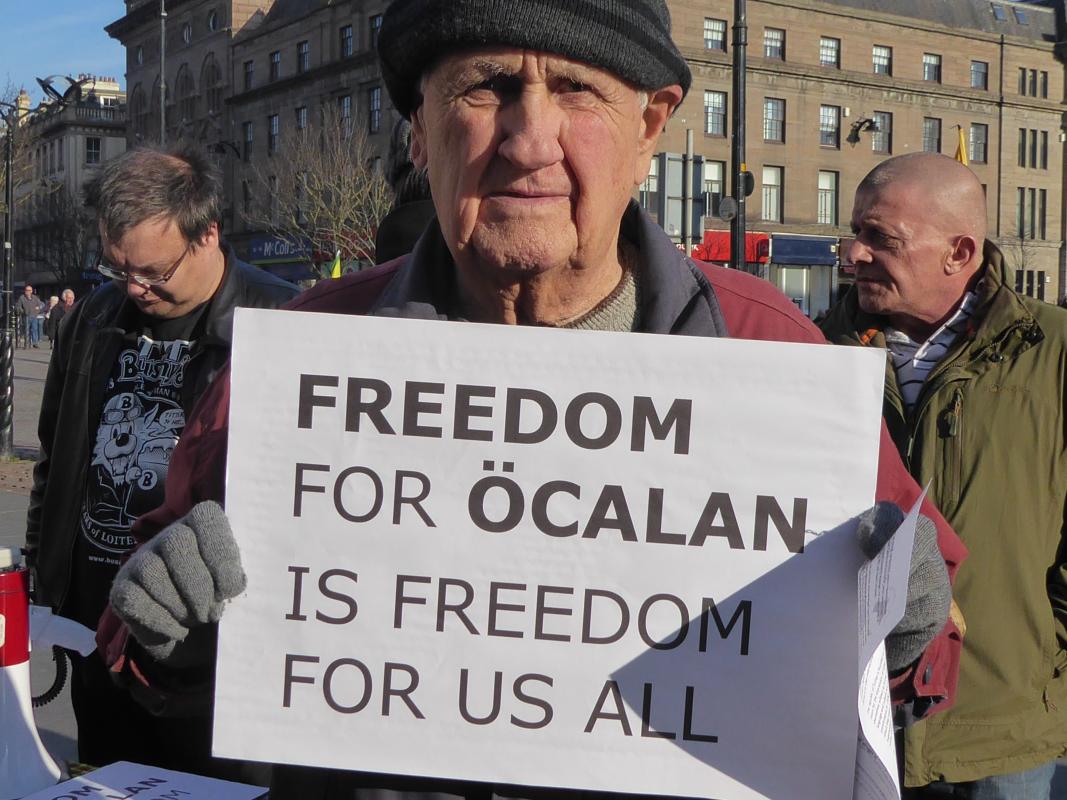