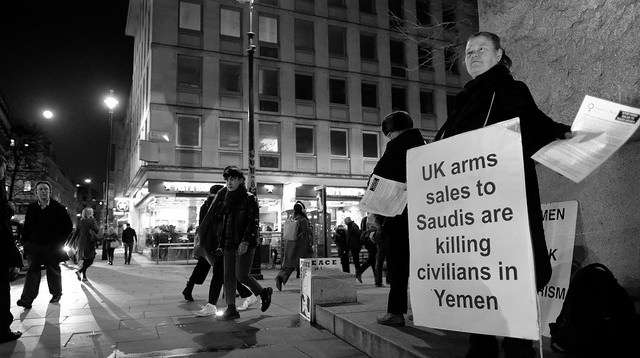 THE STOP THE WAR COALITION will hold a demonstration outside Downing Street on Wednesday (6 March) in protest against the arrival of Mohammed bin Salman, Crown Prince of Saudi Arabia.

Saudi foreign minister Adel al-Jubeir said on Monday that the visit was intended to take the relationship between the UK and Saudi Arabia to a “higher level”, but peace campaigners are protesting the UK’s continued sale of arms to the regime in light of human rights abuses in Yemen.

Since the war in Yemen began in 2015, the UK has licensed £4.6bn worth of arms to Saudi Arabia.

Stephen Bell, officer of the Stop the War Coalition told CommonSpace: “The link between the British government and the Saudi regime has created the worst humanitarian catastrophe in the world today, through war upon Yemen. The link allows for repression to continue in Bahrain.

“The link allows the Saudis to continue to blockade Qatar. Our protests demand a new policy from the British government – one that supports the struggles of the peoples on the Gulf in their struggle for freedom.”

The coalition brings together a range of organisations in the UK including Organisation for Human Rights in the UK, Global Justice Now, Human Rights for Yemen, Bahrain Institute for Rights & Democracy, and Campaign Against Arms Trade (CAAT).

A poll of 2000 adults conducted by Populus for CAAT found that only six per cent of UK adults believe it is acceptable to sell arms to Saudi Arabia. 37 per cent said they opposed the visit the Crown Prince, while only 21 per cent said they supported it.

The poll also found that 41 per cent oppose the sale of military equipment to any country.

Andrew Smith of CAAT said: “The overwhelming majority of people in the UK do not share Theresa May’s political and military support for the Saudi regime. Despite the spin surrounding the Crown Prince, he is a figurehead for one of the world’s most authoritarian dictatorships.

“The regime has carried out atrocities against Saudi people for decades, and has inflicted a terrible humanitarian catastrophe on the people of Yemen. It is time for Theresa May and her colleagues to end their shameful support for this appalling autocracy.”

The demonstration against the Saudi Crown Prince visit will take place at 5pm on Wednesday outside Downing Street, with other protests planned throughout the visit.