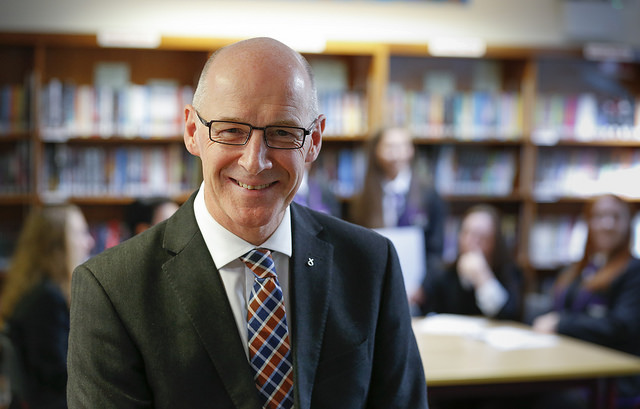 EDUCATION SECRETARY John Swinney has come under fire for ‘lobbying’ on behalf of a private school in his constituency over concerns that it would no longer receive business rates relief after the government decided to scrap it last year.

The revelation has led to accusations of “hypocrisy” on the part of the education minister and of a lack of “vision” in the Scottish Government over the kind of education system it wants to create.

The Scottish Government refuted the allegation*, claiming Swinney was “fulfilling his obligation to raise an issue on behalf of his constituents”.

A letter of reply to Swinney’s enquiry from finance secretary Derek Mackay, seen by the Scotsman, advised that Kilgraston School in Perthshire, which charged up to £10,000 a term, could still enjoy the rates relief at the discretion of the local authority, and that they should contact the council to enquire.

In fact, Mackay said this was “precisely why in 2014 I created a new power to allow councils the ability to offer bespoke local business rate relief schemes” and that it was “incumbent on the council to give any such request proper and full consideration”.

The Scottish Government announced in December that it would stop providing the relief to fee-paying schools in order to level the playing field with state schools after a review headed by former RBS Scotland chairman Ken Barclay highlighted “unfair advantages gained by anomalies within the system”.

The relief currently allows private schools, which enjoy charitable status, to have their rates cut by as much as 80 per cent, funded by the Scottish Government, while this can be topped up further by local authorities.

Professor of education at the University of Strathclyde John Davis, who co-authored a 2016 Common Weal paper on equality in early learning, told CommonSpace that Swinney and Mackay’s communications underlined a “lack of vision for education”.

Davis said: “As a local MSP John Swinney has an obligation to represent all constituents, but it cuts both ways – what about the constituents who don’t get to go to those schools?

“The real issue here is about our schools and how we go forward. Do we believe in private schools -and denominational schools – or do we believe in equity and bringing people together in schools?”

In Davis’ view, the issue is not simply about taxes, but about questioning the “very existence” of private schools.

As a supporter of Scottish independence, Davis said that answers to these questions were essential to creating a coherent plan for education in future. “We need clarity on where we are going if we are serious about social justice in an independent Scotland,” he said.

A YouGov poll earlier this year revealed that 73 per cent of people in Scotland believe that fee-paying schools should not be classed as charities. Although the Scottish Government agreed to stop centrally their tax relief, it stopped short of reconsidering charitable status, confirming at the turn of the year that it did “not have any plans” to do so.

Lecturer, journalist and education policy expert James McEnaney, a long-time opponent of the rates relief and charitable status afforded to private schools, told CommonSpace: “The government’s policy is to remove rates relief from private schools because it is clearly unfair.

“So it’s got to be a bit embarrassing to see the education secretary effectively lobbying his colleague in opposition to his own party’s agreed position by seeking an alternative means of public subsidy for fee-paying education.

“It’s also concerning that ministers apparently think it appropriate to expect councils, whose funding has been repeatedly cut, to pick up the apparent financial slack from a central government policy.”

READ MORE: Back to the blackboard: Education bill’s demise marks a chance for @ScotGov to reflect on its approach, experts say

These criticisms were echoed by Scottish Labour’s education spokesperson Iain Gray, who said Scots would be “bemused” that Swinney “is now lobbying for tax breaks for private schools as education secretary”.

Meanwhile, the Scottish Conservatives, who vociferously opposed removing the tax relief for fee-paying schools, said there appeared to be “total confusion” over the SNP’s position, and that Derek Mackay’s advice amounted to saying that “some councils might choose to end rates relief but others would not”.

A Scottish Government spokesperson* told CommonSpace that Swinney, who is also the deputy first minister, is an advocate of the policy of ending tax relief on private schools, and was simply carrying out “his duty” of raising constituency concerns with the appropriate Minister.

“Swinney was fulfilling his obligation to raise an issue on behalf of his constituents, which is his duty to do so.

“The Finance Secretary simply and plainly explained the law around business rates which includes a separate provision that gives democratically elected local authorities wide ranging flexibility to introduce any new rates reliefs to reflect local needs should they wish to do so. No council has used this power to introduce a rates relief specifically for independent schools.

“As the Finance Secretary made plain, it is a simple statement of legal fact that such a relief would be a matter for local authorities to decide.”