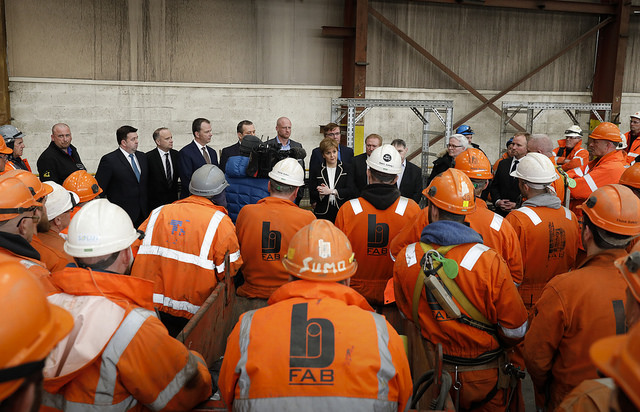 ScotE3, a coalition of climate activists campaigning for a just transition to a carbon free economy, look at the lessons which need to be learned from the decline of BiFab, an engineering firm who’s workers’ skills are needed to power a renewables revolution

IN DECEMBER 2017 BiFab workers from Burntisland, Methil and Lewis staged the biggest industrial protest in Scotland for many years. With site occupations and a mass protest to Holyrood, they forced the Scottish Government to secure funding for the remaining contracts building jackets for the new Moray Firth wind farm. For a brief moment it seemed that jobs had been saved and BiFab might become an exemplar of the much-needed transition from offshore oil & gas to wind and tidal energy.

Hope was short-lived.  Of a workforce of 1,400, only some 390 workers were in direct employment: the rest were on short-term agency contracts.  In early 2018 there was a rapid run down of employment as contracts were not renewed and the Moray Firth contract was completed.  A Canadian company acquired BiFab and the Scottish Government converted its loan into equity, but no new orders were found.  By May 2018 only 43 workers were left and a further 35 redundancies meant that only a handful were left to maintain the yards.

Behind the scenes the new owners, with the support of the Scottish Government, have been bidding for contracts to produce turbine jackets and platforms for the new Moray East and Kincardine offshore wind developments.  But this month hopes of renewed large-scale employment were dashed when it emerged that these contracts had gone to companies in the UAE, Belgium and Spain.  All that remains is 82 jobs at Arnish on the Isle of Lewis.

READ MORE: STUC general secretary: What happened at BiFab “nothing short of a disgrace”

Unite Scotland Secretary Pat Rafferty commented: “Ten years ago we were promised a ‘Saudi Arabia of Renewables’ but today we need political intervention to help level the playing field in Scottish offshore renewables manufacturing. The truth is that state funded European energy and engineering firms, backed by Far East finance and Middle East sovereign wealth funds, are carving-up thousands of jobs and billions of pounds from our renewables sector, and firms like BiFab are left fighting for scraps off our own table.”

We are at a critical moment, when rapid action to mitigate catastrophic climate change is essential.  To move towards a zero carbon economy the marine engineering skills of the BiFab workers are vital.  We know that transition needs around 100,000 new climate jobs in Scotland.  BiFab is a missed opportunity for action that effectively sets us back by more than a thousand jobs.

Could things have been different?  For a few days in December 2017 the BiFab workers inspired many beyond their ranks.  The Scottish Government’s rapid response reflected the strength of feeling and the severity of the jobs crisis.  But fatally it depended on the private sector.  In our view the scale of the climate crisis cannot be left to the vagaries of the market.  We are not alone in this view and indeed the Scottish Government’s proposal for a state run energy company is in part recognition that public intervention is required.  However, the current proposals are limited to taking the role of an alternative energy supplier.  Much more is needed.  We argue for a strategic, integrated and planned approach that encompasses production, infrastructure and distribution.  BiFab could have been the first building block of this strategy.

The point of this article, however, is not to muse about might have beens.  The school student strikes and the growth of Extinction Rebellion have highlighted the need for urgent action.  In our view urgency requires that every possibility for action be pursued.

Just transition isn’t an abstract idea.  It means understanding that working people, their lives, livelihoods, skills and commitment are central to tackling the climate crisis.  Vast sums of money were used to bail out the banks, trillions of dollars were spent on the wars in Iraq and Afghanistan – the cost of keeping the BiFab workers in publicly run, regulated and decently paid employment would have been trivial in comparison.  Let’s learn from this and ensure that the agenda in the coming months becomes the creation of new jobs and not a lament for jobs laid waste.