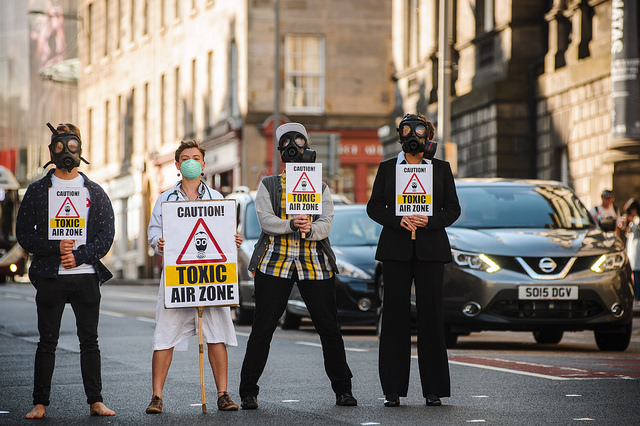 A REPORT published on Wednesday (28 February) by the Scottish Parliament’s environment, climate change and land reform committee has said the Scottish Government must review and detail its plans for ensuring air pollution targets are achieved.

A full review into the active travel strategy should be conducted to ensure that a target of a minimum 10 per cent increase in bike journeys is met, the committee has said, noting the small increase of 0.2 per cent in bike journeys from 2010-16 revealed on Wednesday in the latest transport statistics.

Noting that passenger numbers on buses have fallen by 10 per cent since 2010, MSPs also recommended that issues of affordability and accessibility should be addressed.

The report also questioned whether local authorities would have the technical and financial resources to meet targets for introducing Low Emission Zones – areas where access by high emission vehicles are to be restricted in Glasgow from 2018 and in other cities from 2020 – and recommended that private cars be included within these.

SNP MSP, and convener of the environment, climate change and land reform committee, Graeme Dey said: “Poor air quality remains an issue in a number of our towns and cities across Scotland, and effective change is needed now so that all of us can breathe clean air and lead healthy lives in the future.

“While we recognise that the Scottish Government has ambitious targets to tackle pollution, we have questions on whether the necessary support is going to be in place to achieve these.

“For example, while we support low emission zones and the phasing out of polluting cars to stop toxic and traffic-choked streets, we are seeking clarity on how this will be delivered.”

The committee found that diesel cars were one of the main causes of poor air quality and recommended that the Scottish Government provide a clear timeline and details of regulations or incentives for achieving its commitment to phase out petrol and diesel cars and vans by 2032.

The latest transport statistics indicate that one billion more vehicle kilometres were driven in 2016 than in 2015 and that cars continued to make up 76 per cent of traffic.

The committee has also suggested that the Scottish Government consider implementing congestion charging and workplace parking levies after LEZs are introduced.

Air pollution campaigner for FoE Scotland Emilia Hanna commented on the recommendations: “This is a very welcome report from a key Holyrood committee, which questions the lack of urgency of action on air pollution in Scotland and calls for more rapid delivery on the ground if the Scottish Government is to make progress on its goal of meeting EU air quality standards by 2020.

“People continue to die in their thousands because we are failing to meet these standards.

“The committee highlights a range of transport interventions which could help tackle pollution, including Low Emission Zones, parking levies and further details on the phase out of petrol and diesel cars and vans.

“Low Emission Zones are a vital tool which will make our air cleaner and safer to breathe if they are delivered properly. As Glasgow City Council develops its plans for the first Low Emission Zone, due by the end of this year, it needs to set an ambitious example ahead of the Aberdeen, Dundee and Edinburgh LEZs due in 2020.”

Hanna said the organisation was particularly pleased with the recommendation to include private cars in LEZs.

READ MORE: “Why not a publicly run bus network?”: Campaigners and unions call for transport reform ahead of Holyrood debate

She said: “Glasgow’s Low Emission Zone must ensure that all buses, vans, and lorries have the cleanest possible emissions standards by the end of the year in the city centre, with cars and taxis to be included by 2020 at the latest.

“An LEZ which only includes buses would be very disappointing and would not deliver the step change on pollution that we need.”

Responding to the newly published transport statistics, Hanna said it was clear that “cars are choking our transport networks and are poisoning our air with toxic pollution”.

She added: “The lack of affordable sustainable transport options creates a further disadvantage for people living in poverty.

“Buses are an essential part of the solution to our air pollution crisis, with one bus taking up to 75 cars off the road, and yet the sector has seen a 10 per cent drop in passengers in just the last five years.

“The upcoming Transport Bill must make it possible for local transport authorities to have greater control over bus operations so that buses can play their vital role in reducing air pollution and climate emissions.

“We need less reliance on cars if we are to have cleaner air, lower climate emissions, less congestion and a fairer transport system.”