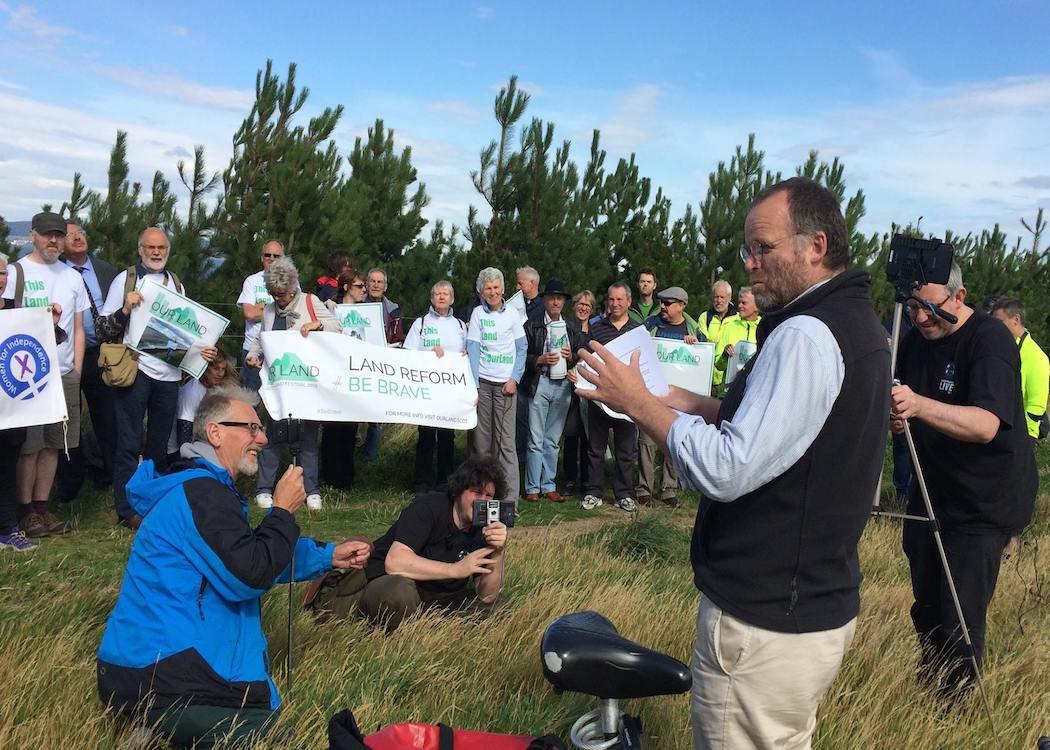 Next stage of land debate to focus on ownership, housing, tax and state subsidies

THE SCOTTISH GREEN party election manifesto has made 18 policy pledges on land reform, which are intended to move Scotland towards ending its archaic system of land ownership.

The movement for land reform became one of the key political tests in the final year of the Scottish Parliament, as campaigners pressed for greater action in the Land Reform Bill 2016.

While the bill was passed, SNP, Labour and Green MSPs were adamant that more action would be necessary after May’s election.

The Scottish Greens, with spokesperson and land expert Andy Wightman taking a policy lead, argue that the next stage of land reform must include progressive land taxation, reform of the housing sector and a redistribution of land ownership.

It’s “inevitable that some of those [private landed] estates in the medium to long-term don’t have much of a future.” Andy Wightman, Scottish Green Party

While many of the party’s election pledges reflect the “unfinished business” of the 2016 bill, several new policies have been proposed.

On housing, the party want council authorities to be free to buy land “at existing use value” through reforming the Town and Country Planning Act 1959. This is intended to reduce development costs – much of which goes toward inflated prices – to reduce the cost of development.

The manifesto calls for “all land to be entered on the valuation roll” for non-domestic rates taxation to pave the way for a future land value tax. The Greens have already proposed a property tax (in place of the council tax) with the ability to identify land costs.

The Land Reform Bill, passed following passionate demands for change, did not address the distribution of land ownership, the housing market or the taxation of land

A land tax would represent the biggest economy change in rural Scotland for generations, as the vast estates that dominate the landscape would likely incur high tax liabilities.

When asked by CommonSpace whether the large private estates (432 equal 50 per cent of all private land) had a future under Green proposals, Wightman replied that it was “inevitable that some of those estates in the medium to long-term don’t have much of a future”.

While there is “no near term threat to their existence” the direction of travel was towards a “gradual diminution in significance”.

As previously reported, the Scottish Greens want to use a modernised Land Settlement Act of 1919 to buyout private land for community use.

The Land Reform Bill, passed following passionate demands for change, did not address the distribution of land ownership, the housing market or the taxation of land (with the exception of re-introducing rates for shooting estates).

However, supporters of the Bill – such as committee chair Rob Gibson who led scrutiny on the proposals – said it was designed as a foundation to move towards a tax on land. Minister Richard Lochhead promised : “Land reform will remain on the agenda. It is not going away.”

Aird Uig community on the Isle of Lewis removes UK military ownership sign. The land is now owned by the people.

The Greens are also calling for a review of Common Agricultural Payments, a subsidy system that has faced criticism for benefiting rich farmers over the common good of Scottish agriculture.

Other proposals include banning tax haven land ownership, an open land registry system, a right to buy for tenant farmers, a tax on derelict land, stronger compulsory sale orders, equal land inheritance rights, protection of common good land, greater democratic controls of the forestry and crown estates, reform of the planning process, and support for community ownership across the economy.

As the first pro-land reform party to publish its manifesto, the Green policies set out a challenge for Labour, the SNP and Rise – who all support further land reform.

SNP members rebelled at their 2015 party conference by rejecting its party policy for not going far enough.

Other party manifesto are expected during the next week.