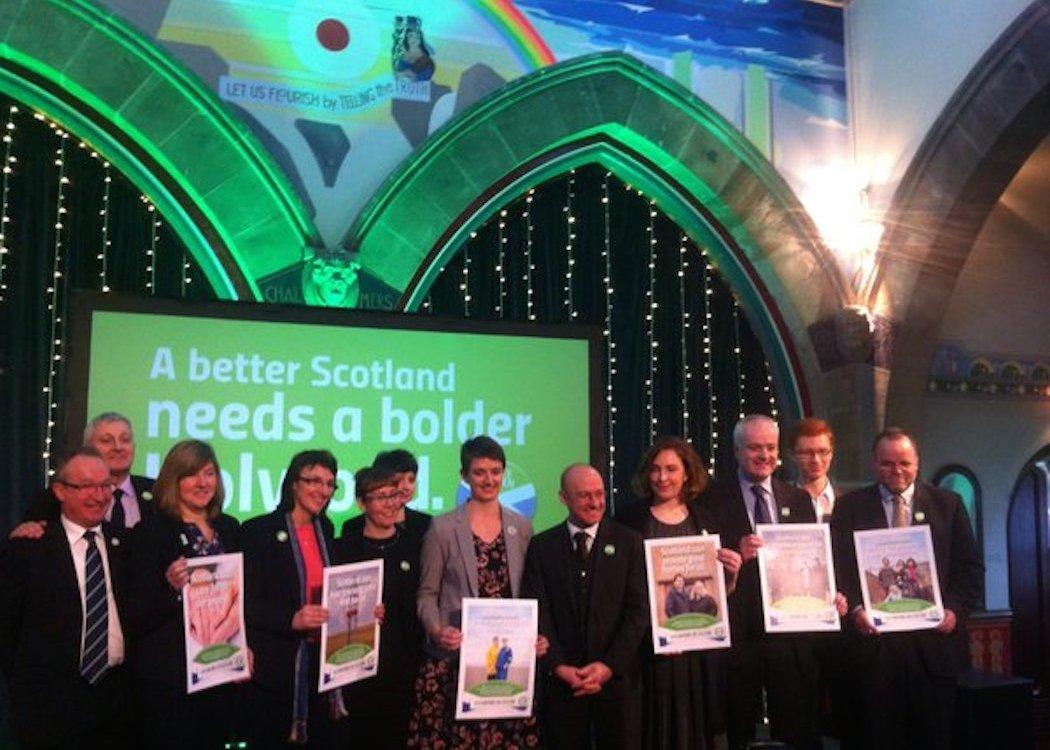 THE SCOTTISH GREENS will aim for a quarter of a million votes and two million contacts during the upcoming election campaign, according to lead candidate for the West of Scotland Ross Greer.

Greer, speaking to CommonSpace following the party’s soft-campaign launch , revealed how the party’s recent membership surge is financing a push to more than triple the party’s vote from 2011.

Greer, who sits on the party’s campaign board, also remained confident that the Greens will receive major party status from the BBC and OfCom over its ongoing dispute for equal broadcasting coverage in the election.

Speaking to CommonSpace, Greer – who formerly worked for pro-independence campaign Yes Scotland – explained: “There’s an idea of a campaign for two million contacts. It’s basically taking the quarter of a million voters that we think we really need and trying to contact them eight times.

“We know from various research into campaigns – whether it’s in the US or the UK – that making eight contacts with a voter is when you really start to make an impact. That contact could be seeing you on the news, getting something through your door, getting your door knocked on, someone tweeting you, getting an email, seeing a street stall all different ways of contacting people.

“So it’s two million contacts that we need to make to reach that roughly quarter of a million votes figure, that is probably the range that we’re looking at to increase from the 80,000 or so we got at the last election.”

The party’s main challenge, winning votes on the list electoral system, will require a distinct and compelling message to the left of the SNP and Labour. The party also faces competition from the newly formed pro-independence socialist coalition Rise.

Campaign board to lead election strategy

Greer noted that the party’s campaign board, chaired by fellow candidate Sarah Beattie-Smith and Peter McColl [former rector of Edinburgh University], will be “ultimately responsible for deciding campaign strategy” including positioning relative to other parties.

The Scottish Greens previously peaked in 2003, when they won seven MSPs as part of the so-called ‘Rainbow Parliament’ when alternative left-wing parties made significant breakthroughs on the list voting system.

Despite falling to two MSPs in 2011, the party has rapidly expanded its campaign infrastructure with the finance from its recent membership surge.

Greer explained: “This is the most professionalised the Green Party has ever been. Previous to this, before the green surge, we had one part-time member of staff working in the office. During campaigns we would have three or maybe four people – not all full-time – working for the short campaign, so the last eight weeks [of an election].

“Since January we’ve had nearly twenty people working on this campaign. We’ve got core staff and campaign staff. Full time staff in every region, press manager, campaign manager. On that capacity level we’re doing way more than we’ve ever done before.

However, the party faces a challenge of public awareness – as it currently stands to be excluded from significant major broadcast television coverage by the BBC and OfCom.

The other four parties at Holyrood – SNP, Labour, and the Liberal Democrats – have all been awarded ‘major party’ status, frustrating Green campaigners.

“We’re confident that public opinion is on our side in regard to broadcast coverage,” Greer said. “If you look at the [independence] referendum and the expectation that the public had of diversity within as well as between both campaigns, there’s an expectation that grew that the Greens would be part of that debate.

“I’ve not met a single political journalist in Scotland who thinks we should be getting any less coverage than the Liberal Democrats. So we’ve still got to wait and see what the BBC and OfCom decide.

“The BBC will be deciding in March. They’re leaving it quite uncomfortably late in my view. But we’re confident that the argument that we’ve made has the evidence to back it up and has public opinion on its side.

“If the BBC decide against that they will be – yet again – widely out of step with public opinion. That’s not going to do their reputation any good in a post-referendum environment where they’re trying to improve and repair the level of trust they have with the public.”

In recent months opinion polls have fluctuated wildly when predicting the party’s fortunes for the Scottish Parliamentary election.

The next major milestones for Scottish Green strategy will be the full launch of its election manifesto.