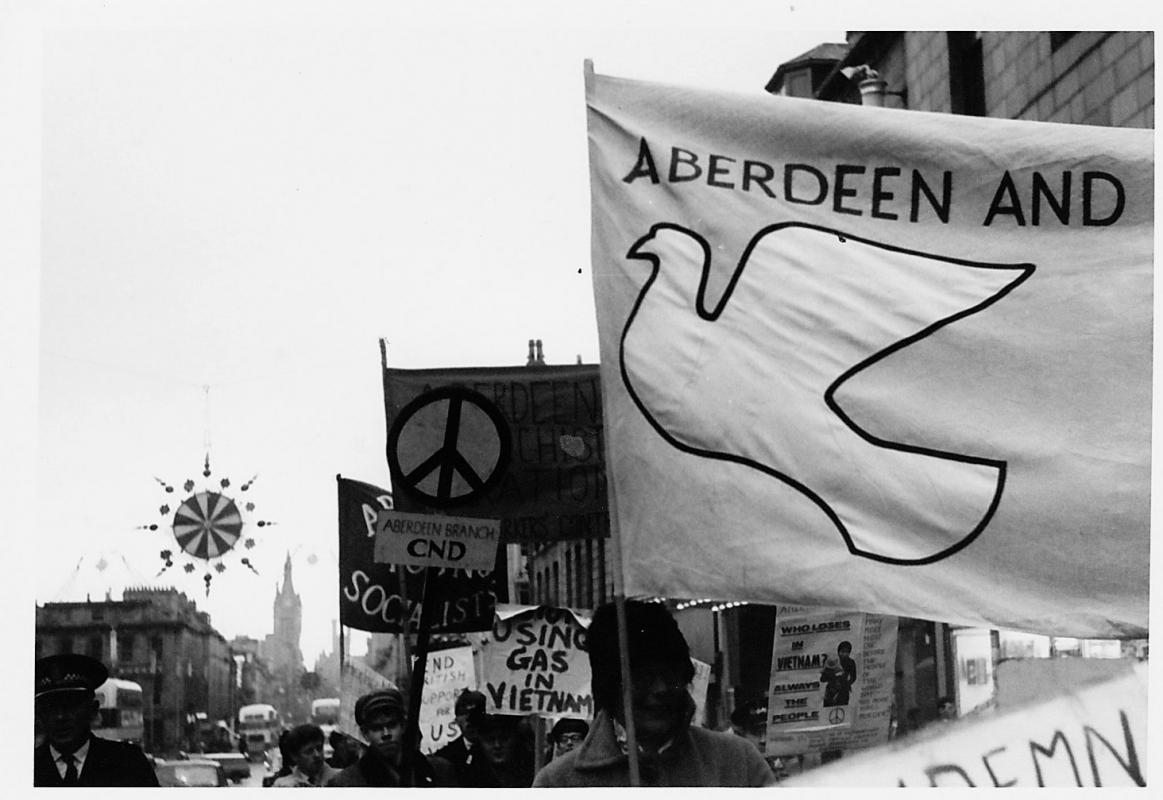 CommonSpace journalist Alasdair Clark explores the impact of the global revolt of 1968 in Scotland, looking at what happened and didn’t happen here, and its legacy

1968 is most remembered now for the events in May in Paris, but it was a genuinely global revolt creating political and social earthquakes in Eastern Europe, the US, Mexico and even Pakistan – but what about Scotland?

Scots historian Richard Finlay has said that “the swinging sixties passed Scotland by”, an assertion challenged by former SNP MP George Kerevan in The National in January where he wrote passionately about the international movements which characterised that time, but also of the Scottish impact.

Kerevan, who began his first year at Glasgow University in 1968, remembers a student occupation at the Glasgow University Union, at the time a men’s union and traditionally socially conservative, with teach-in’s taking place against the Vietnam war.

He tells CommonSpace that while the specific events of ‘68 in Scotland may not have been earth-shattering, anyone who thinks Scotland was absent from the radicalism of the 1960s misunderstands what was happening in Scotland.

“It’s important not just to focus on what happened in Paris in May 1968, or indeed only look at Scotland, but also the wider international context,” he said.

COMMONSPACE FORUM: 50 years since May ’68 – Is the Left still revolutionary?

Kerevan argues that post-war there was an upsurge in youth movements which demanded a break from traditional party and trade union structures, and organised around the anti-nukes movements and the Vietnam Solidarity Campaign (VSC), international movements with strong Scottish links.

This new left poltiics which rejected authority and deference was by no means isolated to university campuses, indeed, Kerevan argues, the movement was “dominated by working class young people”.

“Universities in Scotland were still pretty right-wing then, so actually it was very much working class young folk organising politically as a movement outside of university and traditional party or trade union structures. This culminated as part of the VSC in 1967 which set up a lot of local branches across Scotland.

“There were a few students involved in this, but it was very dominated by working-class young people who had rejected traditional bureaucracy and power,” he says.

Dr Ewan Gibbs, a Scottish historian who specialises in economic and industrial history, also points to the radical politics which dominated Scottish industry, such as at the Linwood car factory in Paisley and the Caterpillar plant in North Lanarkshire.

“At Caterpillar, a new generation of activists who started work at the plant in the mid-1960s incrementally displaced an older layer of more traditionalist trade unionists over the following two decades and instituted a workplace culture of factory meetings, and distrust towards full-time officials,” he says.

Dr Gibbs said this new, better-educated generation entered a different kind of employment which eroded the traditional systems of industrial power:  “It’s been said that Scotland ‘never had a 1960s’ but the expansion of higher education and higher earnings gave young working-class people horizons, expectations and confidence. The decline of deference also weakened traditional structures of authority within the labour movement itself. As a result, there was a growth of workplace power in the hands of shop stewards, elected workplace representatives.”

READ MORE: Dreams in place of our slow-motion nightmares – Why May ’68 still matters

The turbulence of Scottish social and industrial movements did not leave politics unaffected, as Rory Scorthorne, a PhD student studying the origins and history of Scottish radicalism and nationalism, argues.

Scothorne said that a key moment in the 1960s for Scotland was the shock election of the SNP’s Winnie Ewing to Westminster in 1967 after winning a by-election in Hamilton, a supposed Labour safe seat.

“The Hamilton result politicised the question of Scottish national identity, and the ‘British’ parties started falling over each other to come up with some sort of response. The Communist Party had been banging the devolution drum throughout the 1960s, and in 1968 the Scottish Trades Union Congress [STUC] – which was then a seriously big player in Scottish politics – effectively endorsed a Scottish Parliament,” he said.

Kerevan explained the campaign behind Ewing’s election was dominated by young Scottish radicals: “A lot of the young people around the SNP and Ewing’s campaign in 1967 were very much on the left, so the national movement and youth revolt merged in that period.”

Scorthorne argues that the themes of decentralisation and control fitted into the international themes associated with 1968, questioning power and its proximity to the people.

“This was particularly the case in the labour movement, where Scottish workers were increasingly drawing on nationalist arguments and national identity as a way of negotiating British industrial policy,” he added.

However, in some aspects the pace of change in Scotland was much slower. The sexual revolution which swept across the USA and most of the West was late to bloom in Scotland.

Explaining the Scottish context around sexual liberation, Scothorne said: “At that time Calvinism and Catholicism were a huge part of everyday Scottish culture, but there was folk stubbornly chipping away at the repressive edifice.”

In 1967, England and Wales partially decriminalised homosexuality, a change which only came to Scotland more than a decade later in 1981.

Scothorne added: “There were various reasons for this – partly cultural, partly about political foot-dragging, but it was also about how the law was implemented up here within Scots law, which meant enforcement of homophobic legislation was less aggressive.”

But in other aspects Scotland’s social fabric did change more quickly in that time, with prominent intellectual figures emerging who were the polar opposite of Scotland’s old calvinist social conservatism, such as Alexander Trocchi whose existential novels challenged traditional views on sexuality and were influential in Paris ‘68, the radical Scottish pyschiatrist RD Laing and the educationalist AS Neill.

When all of these strands are viewed together, Kerevan says Scotland’s 1968 could be viewed as precursor to a deeper societal impact in the 1970’s.

“A lot of the young people who were influenced by the events and what happens in France in 1968 graduated from education in the early 1970s, which is when they really had an impact.

“If you look at Scotland in the early 70s, those people entering the workplace were very militant. In that sense, I would argue that Scotland’s 1968 was in 1974.

“For example, in 1974 the young teachers who had graduated within the previous two years went on an unofficial strike who closed the schools to demand better pay against the official position of their trade union.”

Dr Gibbs agrees, pointing to the influence of the Scottish section of the minworkers dispute in major industrial actions across the UK which forced the Conservative Prime Minister Edward Heath to call a General Election under the slogan ‘who rules Britain?’.

“A series of strikes culminated in the major national wage disputes of 1972 and 1974,” Gibbs said. “The Scottish Area, under the presidency of Michael ‘Mick’ McGahey, took steps to make the 1969 action official and was part of a growing left in the national union. During the 1972 national strike the National Union of Mineworkers [NUM] Scottish Area blockaded Scotland’s largest power station, Longannet in Fife, in an action that saw several miners arrested under ‘mobbing and rioting’, but they were eventually released as the Heath government sued for peace.”

The 1960s had a profound impact on Scotland’s future, with a generation radicalised by the international events of 1968 going on to have a profound influence on Scottish social, cultural and political life in the 1970s.

Kerevan says that there are lessons from that experience for today’s Scottish independence movement.

“One thing missing at the moment is an internationalist approach – you can’t organise just within one country.

“The independence movement has to find ways of cooperation with Momentum and movements across Europe have to cooperate with each other. That’s really key to seeing radical movements win in the longer term.”