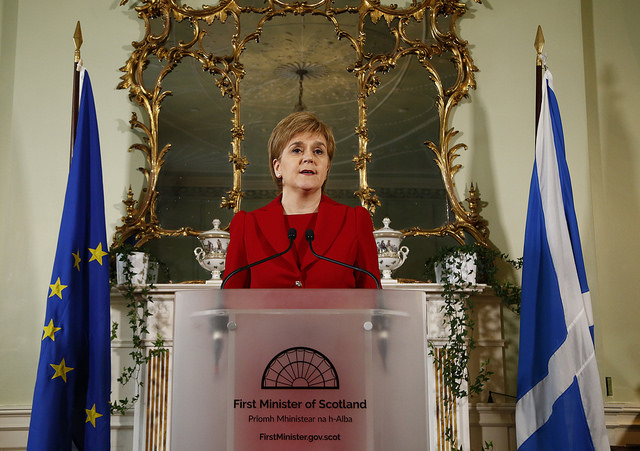 AS THE UK-EU transition deal makes clear that the EU law which provides the right of EU citizens to vote in local elections and local referendums will no longer apply to the UK on exit date, the Scottish Government has asserted its intention to use its devolved powers to maintain and expand on voting rights in Scotland.

The transition deal published on Monday, which is 75 per cent agreed, shows that as of March 2019, these rights will no longer be guaranteed, and the UK and devolved governments will have to introduce their own laws to protect them.

The Scottish Government confirmed to CommonSpace it would be seeking to use its devolved powers – which apply to Holyrood and local elections – to not only protect EU citizens’ voting rights but to expand the right to vote to those outside of the EU.

A spokesperson said: “We are now consulting on extending the opportunity to vote in Scotland to all those who are legally resident here, whatever their place of birth.

“People who make their lives here and contribute to society should have the right to vote, wherever they are from. As well as extending the vote to many people currently excluded from our democracy this will protect the voting rights of EU citizens.”

The UK Government has stated its intention to come to an agreement with the EU to protect the existing voting rights of UK citizens in the EU, and in turn the rights of EU nationals already living in the UK, but critics remain concerned over the uncertain future of EU citizens’ rights.

Ross Greer MSP, Europe spokesperson for the Scottish Greens, commented: “Fortunately, decisions over who can and cannot vote in Holyrood and Scottish local elections are entirely devolved to the Scottish Parliament and there is no suggestion that we remove the right to vote from those in our communities who are citizens of the EU27.

“In fact, Greens have led calls during the Scottish Government’s ongoing consultation for the right to vote to be based on residency and not citizenship. We believe that everyone living in a given jurisdiction and affected by decisions taken over it should have the right to elect those decision-makers.

“That would, for example, mean refugees who have been resettled here would be rightly enfranchised, a wonderful example of our commitment to being a truly welcoming and inclusive nation.”

Craig Dalzell, head of research for pro-independence think tank Common Weal told CommonSpace that such a development could widen the gap in approach between the UK and Scottish Governments and underline a divergence in goals between Scotland and the Union.

He said: “The fact that the voting rights of EU citizens resident in the UK will no longer be protected by EU law as of a year from now is an inevitable consequence of withdrawing from the EU but will no doubt be concerning to those affected.

“I will be watching closely to see if the UK Government proposes stripping voting rights from such citizens.

“I am encouraged that the Scottish Government is openly consulting on the possibility of extending the voting franchise to everyone legally resident in Scotland and I am in full support of this. Those who pay taxes in a country and who use public services should have some say in the governing of them.”

Dalzell added: “It’s worth noting that a divergence is opening up in the voting rights of people resident in Scotland compared to the UK as Scotland has already dropped the voting age from 18 to 16.

“If one or both of the scenarios outlined above come to pass then it may be that legal residents of any age become significantly more democratically enfranchised than similar residents south of the border. This could well be seen as another sign that the Union no longer fits with or respects the goals and aspirations of the nation of Scotland.”

The UK Government has opposed calls to lower the voting age for General Elections and local elections in England, and Tory MPs talked out a bill proposed by Labour to lower the age in November last year.