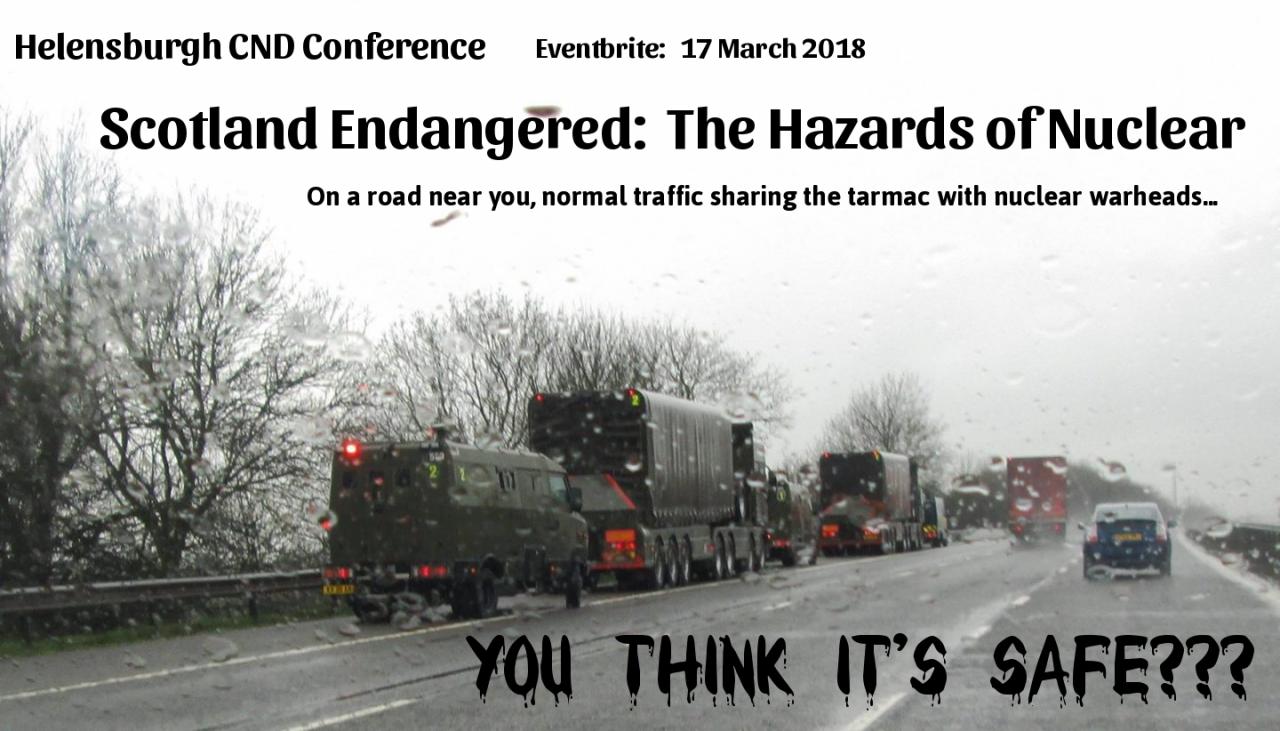 HELENSBURGH CND (Campaign for Nuclear Disarmament) will host a conference on 17 March highlighting the dangers associated with the UK’s Trident nuclear weapons system, regardless of whether the weapons are ever used.

The event, which coincides with the 60th anniversary of CND this year, will take place at Helensburgh Parish Church Hall in the heart of the town which is home to Faslane, the site of the UK’s nuclear weapons.

Scottish CND representatives will be joined on the day by a range of speakers including local MP Martin Docherty-Hughes, investigative journalist Rob Edwards, David Cullen of the Nuclear Information Service, Nukewatch activists Jane Tallents and David McKenzie, and Dr Ian Fairlie, a respected independent consultant on radioactivity in the environment.

Ellen Renton, convener of Helensburgh CND told CommonSpace: “We thought it was important to focus on the safety issues around nuclear, because, I think, this is not as much at the forefront as it should be – I can’t bring to mind a similar conference.”

“Nuclear is inherently unsafe, in the storage of it and the transport of it, there are contamination problems and there are hardware problems,” she said.

Renton explained: “Much of this simply relates to the ageing of the system, the financial constraints of the UK Government, and the extremely, mind-blowingly expensive Trident system.

“They can’t afford their own system, and that has massive implications for safety. There are often malfunctions with the warheads, and it’s reported and it’s ‘oh my god’ for a couple of days, and then it goes away.”

“The big picture when you look at it is quite alarming,” she added.

Renton said that the group also felt it was important to have the event take place in Helensburgh. “Whichever route the convoys take coming up from England, wherever else they are in Scotland, they are always here because this is their end point,” she said.

READ MORE: Linda Pearson: Why we may see the cost of Trident renewal rocket even further

“This is where they are stored, this is where we have the submarines in the water, and where there’s a problem with Tritium [a radioactive chemical].”

The day will be broken into sections, all of which are named after reports which have been published over the last year relating to nuclear weapons. For example, Rob Edwards will speak on “Nukes of Hazard”, a report he wrote last year on the dangers of nuclear weapons convoys.

Another section will look at “Unready Scotland”, which Renton explained was a report suggesting that there is a lack of training in Scotland to deal with a nuclear event or spillage.

“Playing with Fire”, the name of a Nuclear Information Service report published last year, will look at the recent record of nuclear weapons incidents and accidents in the UK.

The conference in Helensburgh will run from 10.30-6pm on Saturday 17 March with tickets available online for £9, or £7 concession. The full event will be live-streamed by Independence Live.