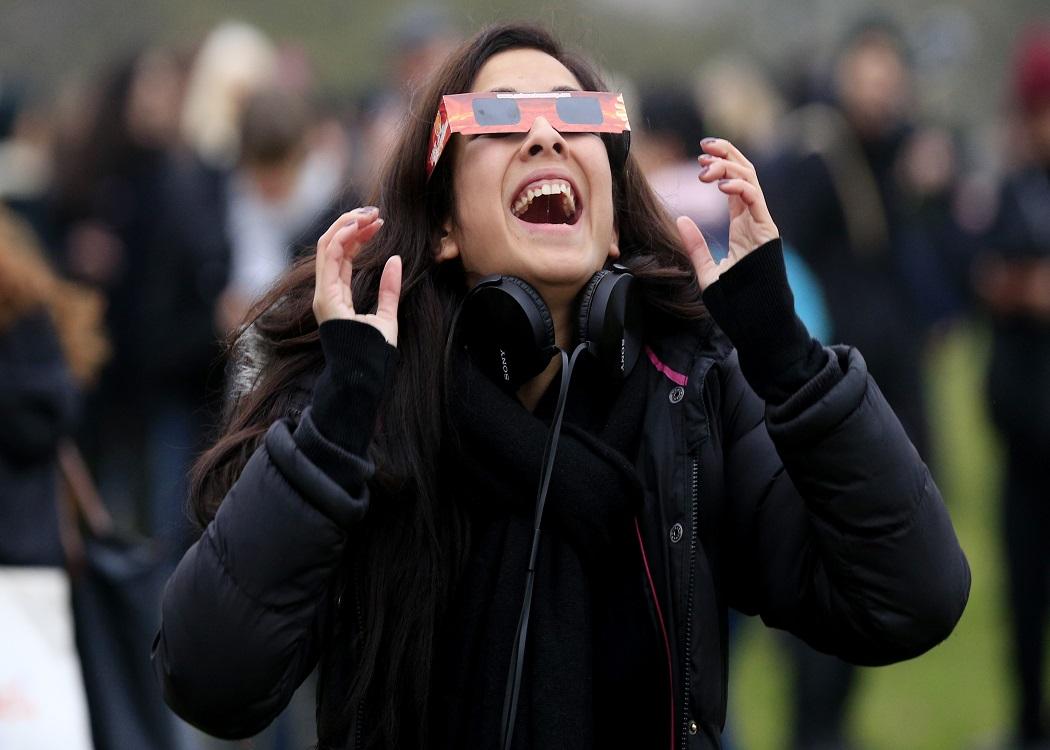 EYES were on Scotland, peculiarly, in hope of clear skies on Friday ahead of a partial solar eclipse.

Media reported that thousands were heading to Scotland in hope of being best-placed for a good view of the event. The next eclipse of this kind – when the moon passes between the sun and the earth, restricting daylight – in the country won’t be until 2026.

But never a nation to miss an opportunity, plenty took to Twitter to see the funny side of the eclipse. We rounded up a few of the best – or worst, we’re not sure – tweets while everyone was outside staring at the sky.

There were General Election eclipse jokes.

Ed Miliband looks directly into the sun while covering his ears. #eclipse2015

#eclipse2015 seems to have divided Scotland along cloudy/non-cloudy lines. This divisive astronomical phenomenon must stop.

It will be darkest in Scotland and Northern England, not just for #eclipse2015, but for the foreseeable future, economically.

Apparently the eclipse is “set to plunge Britain into darkness”. Too late, universe – David Cameron beat you to it.

All this talk of an eclipse Is really just the tories putting the lights out for a few hours to finally put us back to the dark ages.

This solar eclipse would never have happened under a Labour government.

The eclipse of Scottish Labour takes place from 7am to 10pm on Thursday 7th May.

Next Eclipse of similar coverage to tomorrow’s one, won’t occur until 2090. Maybe Scot Labour will have just about recovered then too.

An eclipse in the middle of rush hour? Whose bloody brilliant idea was that? And Labour are no better before you say anything. This country.

You can’t have a day of talking about the sun without bringing Rupert Murdoch and co into it, obviously.

Remember just looking at 10% of the Sun can damage your eyes for life, that also applies to the Daily Record, Mail and Express.

There were a lot of Scottish weather jokes. A lot.

95% sun coverage. The feeling of eternal darkness. Or as Scotland calls it ‘Summer’. #Eclipse2015

Don’t know what the big deal is with the Solar Eclipse. We get that every day here in the west of Scotland. #NaeSun #eclipse2015

You only get 95% coverage of the sun by the moon in England, whereas in Scotland the sun will be covered 100%, by clouds #eclipse2015

People keep telling me there is an eclipse today, This is Scotland we don’t see the sun normally #eclipse2015

The sun will disappear in a flash in Scotland this morning….nothing new there! #eclipse2015 uk

Well done @BBCBreakfast for sending the weather girl to Scotland to *not* see the sun. That happens most days up here #eclipse2015

Pity I’ll miss #eclipse2015. On the other hand there’s no rush to get back to #Scotland The sun is blocked most of the year anyway.

#eclipse2015 or as we know it in Scotland spring!

You get solar eclipse rarely? In #scotland we get it every day #eclipse2015 pic.twitter.com/sMFdleda1z

I don’t get all the excitement about the Eclipse,the Sun being blocked over Scotland happens all the time…. #eclipse2015

Eclipse in Scotland? How would we tell?? #eclipse2015

Streets full of mournful Glaswegians staring at the sky, longing to see the sun. Like most March mornings then… pic.twitter.com/RLoN6BuJMi

Some offered some helpful advice, which came too late for CommonSpace.

Remember not to look directly at jokes about the eclipse.

Some missed out on the whole thing completely, like Buzzfeed’s Jamie Ross.

I’m inside a train, facing away from the sun, on a cloudy day, next to a man eating Monster Munch at 9.13am. This is my worst eclipse yet.

And others had much better ideas. This would have been cool.

I almost wish we hadn’t been told about the eclipse. A massive in-joke between astronomers. “Don’t say anything guys!” *DARKNESS DESCENDS*