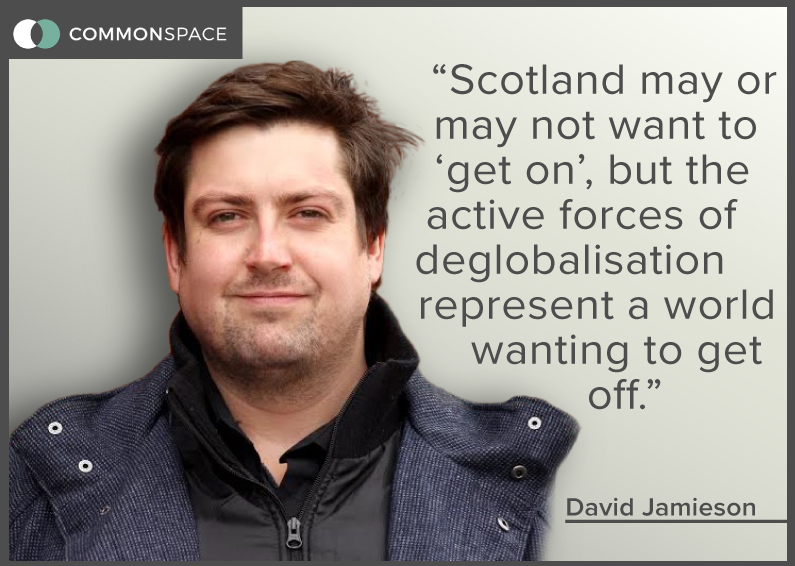 David Jamieson, CommonSpace columnist on culture and ideology, explores Scottish attitudes towards the international order and its institutions in the age of Trump

“STOP THE WORLD, SCOTLAND WANTS TO GET ON” – this is the famous utterance of Winnie Ewing after her 1967 Hamilton by-election victory that established the SNP on the political scene.

The phrase was canonised in party mythology both by sheer force of repetition and by subsequent developments in the party’s outlook. But inevitably, the romantic and general sentiment took concrete institutional form.

“The SNP’s commitment to the EU stems from the late 1980s, when the leadership realised that it could counter accusations of provincialism and separatism by embracing the idea of Scotland as an independent country inside a broader European community,” says Jamie Maxwell, a journalist who has studied the development of the party.

The SNP’s move towards the institutions of western power occurred as that global axis strengthened with the decline of the USSR and global Communism.

In the 90s and 00s the victorious order extended in a decadent sprawl, East through Nato, South through Nafta and the new assertiveness of the World Bank and IMF, and towards tighter integration through the development of the EU – especially the launch of the Euro in 1999.

And then, in 2008, the heart of the new globalisation stopped beating. The financial crisis signalled more than the weaknesses of national governments, it exposed the failure of an entire model of economic development and global governance.

The Eurozone was hit hard. For years the EU had accentuated the divide between a European ‘core’ – countries like France and Germany, at the expense of a European ‘periphery’ – like Greece and Spain. When the crisis arrived, already vulnerable nations were forced to carry the burden, while the EU regime exacted cruel punishments on populations to service the losses of German and French banks.

In some quarters, the heady enthusiasm for the EU and the vogue for the liberal international order it represented, inherited from its supposed golden years of expansion, died hard. In Scotland, it didn’t seemed to die at all.

“Over time, and particularly since Brexit, senior nationalists have increasingly bought into the notion of the European project as fundamentally democratic, liberal, and ‘outward-looking’ one – even though, in its approach to Greece and Catalonia, for instance, or the refugee crisis, European leaders have been anything but democratic and outward-looking,” says Maxwell, who is now working in Canada.

“Watching from a distance, I don’t think the SNP top brass have developed any meaningful critique of the EU as a set of institutions utterly committed to budgetary discipline at the expense of national sovereignty.”

Indeed that critique is all but absent from official Scottish political life, with all five Holyrood parties backing Remain in 2016. What a shock then when so many people across the UK with such little political representation voted the country out of the bloc, threatening to take with it a full 15 per cent of the EU’s economy and much of the project’s prestige.

The coincidence of the Brexit vote with the election of Donald Trump as US President and other populist ‘shocks’ in the heart of the global system have led some to paint a picture of politics today of an otherwise stable social order under siege from forces of irrationality and chauvinism.

Gordon Guthrie, author of War is Coming and Scotland after Brexit, believes that the existing institutions are more than a match for the threat: “The EU is pretty stable – the Brexit process has solidified support for the EU across Europe. The external global political environment is in a state of flux, but Europe itself is in quite a good place. The Russian economy remains a joke, and at 20 per cent of government expenditure on defence already Russia is consuming itself in a host of pointless military adventures. Trump remains an enemy of the global economy.”

The nod to Russia provides an explanation for the forces responsible for undermining the institutions of the global order, but for Guthrie there is a class, or perhaps ‘sectional-class’ dynamic to political conflicts.

“There is no such thing as ‘a capitalist’ or a continuum of politics that includes Kenneth Clarke MP and the Koch brothers.

“We need to change our analysis of the right, and build relationships with those who have been our electoral opponents against our actual enemies – emboldened by Trump and Putin.”

WATCH: How you can get involved in CommonSpace’s Defeating Global Trumpism week

Guthrie argues a straightforward line can be drawn between the good guys – liberal Europe – versus the bad guys – Trump’s authoritarian nationalism, with the latter totally uncompromising towards the former.

This is because, Guthrie explains, “There is no ‘West’. Scotland is a European country – there is no alignment to be had with the US this side of regime change. We could be a meal, but not a guest in their house.”

The material facts of the situation create problems for an analysis of this kind. The United States remains the epicentre of the global order. It’s economic and military might are unrivalled, and the ‘multi-polar world’ of Russian propaganda remains just that – a rhetorical flourish convenient in Moscow, Washington and Brussels to justify an aggressive posture, but which has little basis in a sober geopolitical reading of the balance of forces.

The picture of hegemony is no less true in Scotland, which suffers an unusually high level of foreign ownership, with a third of the Scottish economy owned by foreign firms. Of course, the United States is the pacemaker. In 2016 the US supplied a whopping 35 per cent of all foreign direct investment into Scotland, swamping that of its closest competitors.

Scotland has an umbilical link to the US economy, but it is also networked into it’s global military apparatus through Nato (opposition to which has been abandoned by the leadership of the SNP) and Trident is essentially a US weapons system parked on our turf – controlled, supplied and even transported by the US military and manufacturers.

When one, like Jonah, is in the belly of the whale it may be comforting to say ‘there is no whale’. But that is no way to reach Nineveh.

“There is no ‘West’. Scotland is a European country – there is no alignment to be had with the US this side of regime change. We could be a meal, but not a guest in their house.” Gordon Guthrie

The Scottish Government seems to have no intention of decoupling itself from US influence. On the contrary, its strategy is to continue trends of US economic investment. As it’s new #Scotlandisnow campaign asserts “Americans today are playing a key role in the economic and cultural development of Scotland and those bonds which were made long ago…are more relevant now than ever.” In a reminder of some earlier 21st century episodes, the website describes this as ‘destiny’ and a ‘special friendship’.

But the more general picture of a placid global scene suddenly and rudely interrupted by populism which is so popular in the media also ignores the major dynamics of the global system.

The unwinding of the globalised world order started years before Trump and Brexit. It started under the very political centre that now warns of the dangers of Trump’s trade war policies and his berating of European allies for more Nato military funding.

Indeed, Trump’s trade war, doling out tariffs around the world, and now worth around $34bn between the US and China alone, is depicted as the very anathema of the global order. Not so.

The unwinding of the globalised world order started years before Trump and Brexit.

Between the 2008 financial crisis and early 2017, more than seven thousand new protectionist measures had been introduced around the world. The measures speak to the new paranoia about emerging economies, and around half of these measures were designed to hem-in China.

This is not just about the financial crisis either, devastating though it was. The global economy actually re-established its globalising trends, with growth in trade outstripping growth in production, by 2010. As soon as the recovery emerged it dissipated. Since then the situation reversed into what many economists are calling ‘deglobalisation’.

Scotland may or may not want to ‘get on’, but the active forces of deglobalisation represent a world wanting to get off.

Rory Scothorne, a researcher in the development of Scottish nationalism at Edinburgh University, says that recieved ideas about Scottish national coherence (paraded, for instance, in the #Scotlandisnow campaign) will struggle to survive the new global realities:

“It depends on the global scene, really, which doesn’t look good right now. The point, for the SNP and the smarter bits of wider ‘civic Scotland’, is ‘future-proofing’ Scottish society for whatever the world throws up next.

“It assumes that the right model of governance, based on a high degree of political consensus, could adapt to almost anything; this is, of course, a way of thinking about government that is the product of a specific set of historical circumstances which are collapsing in front of our eyes.

“Disinterested ‘expertise’ is losing credibility, the media is increasingly decentralised, politics is increasingly polarised, and all of this is the result of global economic, technological and cultural transformations that can’t simply be ‘adapted’ to.”

“‘Future-proofing’ Scottish society for whatever the world throws up next assumes that the right model of governance could adapt to almost anything; this is, of course, a way of thinking about government that is the product of a specific set of historical circumstances which are collapsing in front of our eyes.” Rory Scothorne

The ideology of ‘Scottishness’ is already twisting in the cruel winds of the new global disorder. On the eve of Trump’s visit to the UK and Scotland, Nicola Sturgeon shared articles by Madeleine Albright and Henry Kissinger, figures of the US extreme centre and the butchers, respectively, of Baghdad and Bangladesh.

The uncomfortable truth is that Trump’s brutal, conflict obsessed worldview makes no sense without these creatures. He was reared under their grotesque influence.

This is how we must read the era of Trump. Not as the negation of what came before, but simply its logical evolution. Deglobalisation is globalisation, just at a different stage in its development. Brexit is the EU expressed in the performance of its many violent contradictions. No ‘normal’ or stable political order is possible under the forces of economic and military competition that drive the global system.

What is a counterweight is global opposition to capitalism and war. It alone is the anchor of civilisation in the maelstrom. It’s appearance in Scotland with Trump’s arrival, in the form of tens of thousands marching on the streets, will prove that Scotland is ready to get on.