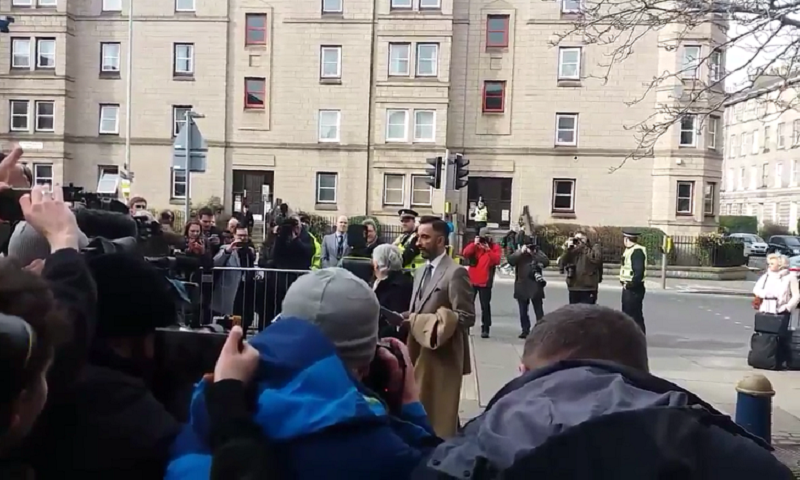 FORMER CATALAN MINISTER Clara Ponsati has formally been placed under arrest following her voluntary arrival at an Edinburgh police station, accompanied by her solicitor Aamer Anwar and members of her legal team.

Ponsati and Anwar’s arrival was preceded by both a heavy media presence and a group of demonstrators, some displaying Catalan flags in solidarity with the former education minister, who is facing extradition on charges of “violent rebellion” and misappropriation of funds during the Catalan independence referendum of October 2017.

In a prepared statement delivered to press outside of the police station, Anwar said: “After we enter the police office my client will be formally placed under arrest.

“The European Arrest Warrant will then be served upon her and Clara will be transferred to Edinburgh Sheriff Court where she will appear from custody.

Thanku so much from @ClaraPonsati – ‘Defiant, Resolute & Determined to Fight Back’ on way 2Edinburgh -Clara will b arrested in next hour & taken 2court 4extradition hearing at 2pm #DefendClara #Catalonia please keep sharing https://t.co/Lwi2rGLweG pic.twitter.com/XcMx6R8j5K

After detailing the charges facing Ponsati, Anwar continued: “My legal team is instructed to robustly defend Clara as she views these charges as ‘political persecution’ and a systematic attempt to crush the spirit of the Catalan people and their desire for freedom.

“She does not believe that the Spanish courts can guarantee independence, human rights or justice.”

Anwar said that his client “remains defiant, resolute and determined to fight back.”

Anwar placed particular emphasis on Ponsati’s desire to that “the many hundreds of thousands of ordinary people, especially in Scotland, who have shown her such love and support.”

Anwar also expressed gratitude on behalf of Ponsati to “Nicola Sturgeon, the Scottish Government, and politicians for their solidarity.

“Scotland has been a true friend to Catalonia in her darkest hour.”

Anwar went on to reiterate his consistent argument, expressed in his interview with CommonSpace yesterday, that “it is absolutely right that the independence of the judiciary in Scotland in respected and that no Government should interfere in that process.

“Clara accepts her fate now lies in the hands of the Scottish justice system.”

Ponsati will arrive at a hearing for her extradition at 2pm at Edinburgh Sheriff Court, where her legal team will apply for her to be bailed before the hearing is adjourned. Demonstrations of solidarity are expected outside of the Sheriff Court building.