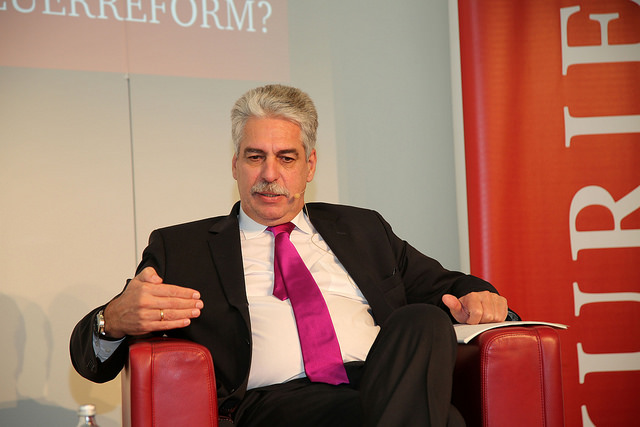 AUSTRIAN Minister of Finance Hans Jörg Schelling has said he and “many in the Eurogroup” anticipate ‘Brexit light’ – a situation where “England comes out, Scotland and Northern Ireland remain” in the European Union.

He went on to suggest: ”Scotland, Northern Ireland are not going; they are likely to remain in the Union and Great Britain will probably become Little Britain.”

EU finance ministers of the eurozone met in Brussels on Monday to exchange views on the economic and financial situation in the Euro area.

Ministers were also briefed on the developments in financial markets following the outcome of the UK referendum on EU membership on 23 June.

The Austrian government believed the effect of the Brexit vote on Austria was estimated to have a 0.5 negative drop on relative growth in the Austrian economy for this year.

Mr Schelling had told German business newspaper Handelsblatt  that European leaders were discussing “all possibilities” from Britain remaining in the union to “a free-trade agreement based on the Swiss or Norwegian model”.

The minister from the conservative Austrian People's Party (ÖVP) previously said he did not see the result on the UK’s membership of the EU to be “absolutely fixed”.

Yesterday’s comments are a departure from previous statements last Wednesday where he stated he was certain the whole of Britain was “sure to stay in”.

However, Schelling also suggested the United Kingdom could break up as Scotland and Northern Ireland – which voted for Remain – could choose to remain members of the EU while England and Wales go it alone.

”Scotland, Northern Ireland are not going; they are likely to remain in the Union and Great Britain will probably become Little Britain.” Hans Jörg Schelling

“The UK has woken up in the meantime, with all the Leave supporters leaving the field and taking flight,” the finance minister said.

As a result, Schelling said he believed the British had realised that their vote to Leave was of "much greater damage" for their country than for Europe.

It comes at the same time as Theresa May, the soon-to-be Tory prime minister of the UK, stated that “Brexit means Brexit”, dashing hopes by some in the European camp that the UK would stay in the Union despite the recent political upheaval.

She indicated that despite being a supporter during the EU referendum of remaining, she would preside over a negotiated exit.

However during her run for the Tory leadership and prime minister position, May made it clear she would not evoke Article 50 before the end of the calender year.

This is the legal mechanism required for a state to declare if it wishes to leave the European Union, however it has never been enforced before. Several legal experts and academics have said that neogitations to formally leave may take up to two years and further seperate trade deals by up to 10 years.

The meeting of finance ministers on Monday also consolidated a collective opinion that a quick exit for Britain was the priority for the progression of European reform.

Schelling was in agreement with the Dutch finance minister and president of the Euro group, Jeroen Dijsselbloem, who said: "The faster we do this, the situation will be better."