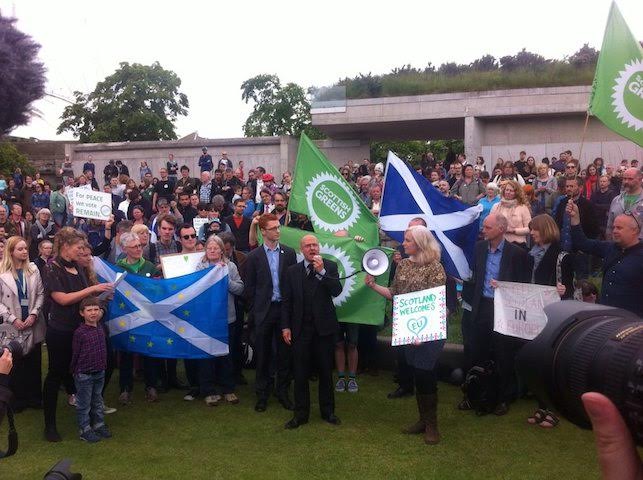 MSPs say Scotland will stay in Europe after referendum result

CAMPAIGNERS hopeful of retaining Scotland’s place within the European Union gathered in Edinburgh today [Tuesday 28 June] as the nation’s parliament prepared to endorse a plan to try and keep the country within the EU.

A swift cross-party coalition – supported by the vast majority of MSPs – now support the Scottish Government’s attempts to reach out to other European nations to respect the outcome of the referendum in Scotland.

Outside the parliament at lunchtime, around 1000 people gathered for a political rally to support Scotland’s place within the EU – as endorsed by 62 per cent of the voting electorate last week.

Campaigners hopes have been boosted after positive signs from German, Polish, Belgium, Irish, and French political groups – who have all sent messages of support regarding Scotland’s place in the EU.

Choir singing for Scotland to be an open & welcoming country. #ScotlandInEurope pic.twitter.com/lZyNHz0r0h

A choir group and folk band Lau performed for the crowd, the first major public event to demonstrate support for Scotland’s continued place in the EU. Greens MSPs, who organised the rally, said that Scotland would remain within the EU.

Minister Alistair Allan explained that the Scottish Government will seek cross-party support, and support from across society, to keep Scotland in the EU.

A spokesperson for EU commission president John Claude Juncker has signalled that he would be willing to meet with Scottish representatives to discuss the fallout from the vote.

The European Parliament stood in solidarity with Scotland in a standing ovation today [28 June] after an impassioned call from the SNP’s Alyn Smith MEP who said: “Scotland did not let you down. Do not let Scotland down.”

In Edinburgh, campaigners called for diplomatic action to safeguard Scotland’s place in Europe. Anni Pues, a lawyer and academic originally from Germany, called for citizens of other EU nations in Scotland to act as ambassadors to secure the country’s position.

CommonSpace also spoke to Kate Duncan, an activist with Berwickshire Granarchists. The duo has hit the headlines with their enthusiasm for protests and political change. Duncan said she was determined for Scotland’s place in Europe to be protected.

The constitutional breakdown between Scotland and the rest of the UK has been created by a vacuum of political leadership at a Westminster level. David Cameron resigned as prime minister, and is trying to delay formal negotiations until a successor is agreed.

First Minister Nicola Sturgeon said it would be a “democratic unacceptable” if Scotland was removed from the EU despite people in Scotland voting to stay.

The first priority of the Scottish Government is to seek stability and negotiations to keep Scotland within the EU, while accepting that as it stands Scotland is part of the UK.

Campaigners determined that the vote in Scotland to stay in the EU is respected. #ScotlandInEurope pic.twitter.com/9vyyLKMvAv

However, the threat to Scotland’s place in the EU has caused a surge in support for Scottish independence. Three polls in the last week have given independence a lead. The Scottish Government has said that a second independence referendum is “highly likely” if no other route to keeping Scotland in the EU is found.