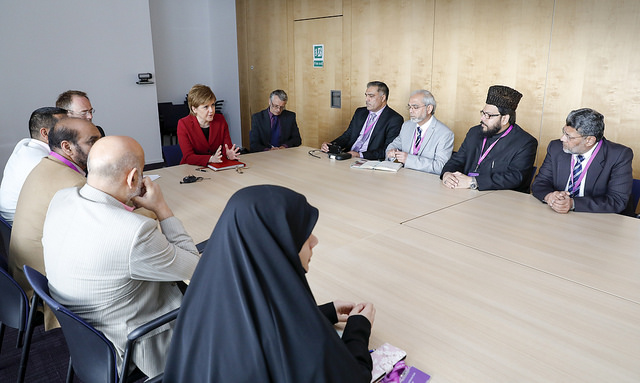 THE SCOTTISH GOVERNMENT’S plans to extend to the right to vote to refugees and asylum seekers have been welcomed by the Scottish Refugee Council and the Scottish Green Party.

Following the devolution of new powers over elections in 2016, the Scottish Government launched a consultation on electoral reform in December 2017, exploring the possibility of extending the voting franchise to “everyone legally resident in Scotland”, including all those granted asylum or living on a visa, such as non-EU or non-Commonwealth citizens.

Articulating the Scottish Government’s position, the consultation observed: “It seems only just that everyone legally resident in Scotland should have voting rights, allowing them to influence government and parliamentary decision-making.”

Parliamentary business minister Joe FitzPatrick confirmed to MSPs on Wednesday [May 23] that the Scottish Government believes “it is right that people who make their lives here and contribute to society should have the right to vote, wherever they are from.”

READ MORE: Lynn Henderson: The UK electoral system is rigged against workers – here’s why trade unions should back reform

Asked by Green MSP Ross Greer to confirm that the Scottish Government’s commitment to extending the franchise would include refugees and asylum seekers, FitzPatrick replied: “Yes. In my view, people who have been welcomed here as refugees and people who are going through the process of seeking asylum should be included.

“Scotland is a welcoming country and our intention to extend the opportunity to vote to all those who are legally resident in Scotland, whatever their place of birth, should include refugees and asylum seekers.”

Responding to a query from SNP MSP Ivan McKee, FitzPatrick also said that Scottish Government proposals on the franchise will “provide clarity” over the right of EU citizens to vote in Scottish Parliament and local government elections during the Brexit transition period and in its aftermath.

“That would send a clear message to those EU citizens about how welcome and valued they are in our society,” FitzPatrick commented.

FitzPatrick noted that responses to the consultation were still being analysed, but initial indications showed “overwhelming support” for the Scottish Government’s position.

In order for the proposal to be put into effect, a two-thirds supermajority in the Scottish Parliament will now be required. However, should the electoral reform come into effect, it would not impact on general elections, control over which remains reserved to Westminster.

Following the exchange at Holyrood, Ross Greer commented: “Giving refugees and asylum seekers the right to vote will go some way in showing that they are truly welcome and that Scotland is their home. Having made this call at the start of the year, I’m delighted Scottish Ministers agree that it is right that all those living here and affected by decisions made locally or nationally have a say in choosing who makes those decisions.

“Scotland’s history of taking in those in need of a safe home is a long one and continues today. I look forward to further details in Parliament on extending the franchise.”

Speaking on behalf of the Scottish Refugee Council, which contributed to the consultation, SRC Chief Executive Sabir Zazai told CommonSpace: “Refugees often flee their homes because their human rights are denied. For people from the refugee community to then have access to all their rights including the right to vote in Scotland is a hugely significant point in their journey towards integration, citizenship and the ability to play an active role in society.

“We very much welcome the news that Scotland is leading the way on this issue and hope other nations will also see the potential in refugees playing a fully active role both socially, politically and economically.”

Mark Butterly, who authored a report on immigration and aslyum policy in Scotland for the Common Weal think tank, also commented: “In essence, I think this is a good development, giving people a voice and participation in the country people live in is critical.

“I think though there is a broader point; while immigration is reserved, the fact that the Scottish Government has made a separate decision on voting shows that they can take a different route to Westminster on migrant rights.”

However, Butterly notes, “the right to vote is only the first step and reforms need to include social and economic rights moving foward to be truly universal. Asylum seekers are currently denied access to benefits in Scotland, expected to live off of half of JSA (£36 per week) and are legally barred from working.

“The Scottish Government support of universalism is welcome but further action is needed for broader equal rights for all people living in Scotland.”