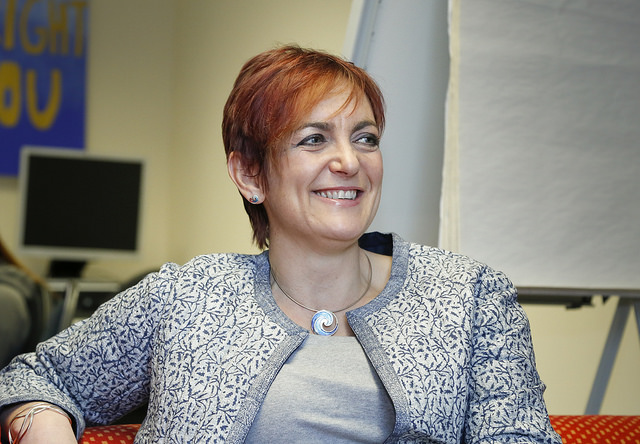 THE GENDER REPRESENTATION on Public Boards Bill was passed in the Scottish Parliament on Tuesday, which means that public sector boards must work towards a target of having 50 per cent of non-executive members be women by 2022.

The law, which covers colleges, universities, health boards, police and the fire service, passed by 88 votes to 28, with only the Conservatives voted against it.

Now, ministers and public authorities will have a duty to encourage women to apply to public board positions and, where there are two or more equally qualified candidates, boards should choose to appoint a woman if this will help it to meet the 50 per cent target.

The legislation aims to address the gender imbalance on public boards, where 45 per cent of members and 25 per cent of chairs are women – a fact which gender equality campaigners have argued limits women’s involvement and influence in public life and decision making.

Cabinet Secretary for Communities, Social security and Equalities Angela Constance said that she was “delighted” by the bill’s progress and noted that it would make Scotland the only country inthe UK to have a statutory objective of this kind.

She said: “It is unacceptable that women are still underrepresented in senior positions in the boardroom, paid less than their male counterparts and subjected to sexual harassment and violence. Young women who are growing up in Scotland today should not have to accept those things as inevitable.

“Women are not a minority; at nearly 52 per cent of the population in Scotland, they represent the majority. Our voices should and need to be heard in decision-making spaces, whether in the boardroom, on the floor of this chamber or elsewhere.

Gender representation on public boards bill passes yes 88 : no 28
That’s a win for 1 of our 3 asks to progress fair representation of women as decision makers in Scotland!! Thank you to all our supporters and champions.

“We know that greater diversity in the boardroom leads to better performance by encouraging new and innovative thinking and better decision making. In other words, it is the smart as well as the right thing to do.”

Responding to opposition from the Tories on the grounds that quotas are not the way to achieve equality, Constance emphasised that the new legislation would not impose quotas but would rather set an objective and require “steps to be taken to meet that objective”.

The Bill secures one of the Women 50:50 campaign’s three objectives of gaining equal representation on public boards and amongst candidates for local and national elections.

Numerous Labour, Green and SNP MSPs spoke in favour of the Bill, including Labour’s Kezia Dugdale and the Scottish Greens’ Alison Johnstone, who co-founded the Women 50:50 campaign in 2014.

Johnstone said: “We have heard that women have borne the brunt of welfare reform. Changes to vital social and economic support are typically not planned with women’s needs and interests in mind. Women still carry out the majority of hidden domestic work, caring and emotional labour, if you like—work that is hard to quantify in any economic analysis, but which is hugely valuable.

“When women are not adequately represented on public boards, it minimises opportunities to create more gender-sensitive public services and it is a declaration of our indifference to that wider lack of representation.

“I have said this before and I will say it again: as a councillor in Edinburgh, when schools and nurseries were being closed, my surgeries and the meetings were full of women, but when it came to taking the votes, where were they?

“Largely, they were absent because they are not represented in the numbers they should be in all chambers.

We fully support the bill, but have stated that it MUST be implemented in a way that genuinely hold boards to account and ensures true diversity of women: BME, disabled, LGBT, migrant, working class. All of our voices.

“The Bill is a really important step, but we should recognise it as being a starting point for further action to improve diversity on public boards and in public life more generally.”

She added that, in light of this, there was also a need for “strategies to enable the representation of women from minority ethnic, minority faith and refugee communities and women with different sexualities”.

Kezia Dugdale said the Bill was “very welcome” and that the Women 50:50 campaign was “pleased to tick it off today”.

She said: “Today will represent the end of the beginning rather than the end itself. If I needed any reminder of that fact, I would only have to look to the evidence that was given to the Economy, Jobs and Fair Work Committee this morning, from which we learned that the Scottish Government spends £2bn every year on economic development of which just £400,000 goes towards women in enterprise.

“That reminds us of how important it is to have a balance of gender in our decision making, so that we make decisions that reflect women’s needs and the needs of wider society.”

An illustration of women’s equality not being linear and of slippage – we had 40% women MSPs in 2007, we have 35% right now. This Legislation is about never taking hard fought progress for granted (also why we need similar action on political representation)

“When we pass laws, they have two purposes: they are either symbolic and are intended to drive cultural change or they have a practical effect on some existing injustice.

“The Bill does both of those things—it is symbolic because it sends out a message that gender equality is good business but it will also have a practical effect because it will overcome the existing inequality in the composition of our boards.”

Speaking on behalf of her Scottish Conservative colleague Annie Wells, Alison Harris said that while Wells wished to “reiterate her support for achieving equal representation of women in all walks of life”, she did not believe “statutory quotas” were the appropriate means with which to achieve it.

She continued: “Although we may go back and forth over semantics and what exactly a statutory quota is, in essence, the bill sets a legislative target. Annie Wells believes that, instead of getting drawn into creating legislation when many people still have questions over its operation, it is absolutely essential that we focus on tackling the issue of gender inequality more broadly.

“Positive action does not have to mean putting through legislation for legislation’s sake. We need to promote educational reform and make improvements in childcare and society’s attitude more generally if we are to make a real difference for girls growing up in Scotland today.”

Again… “If we must question and challenge unacceptable attitudes and gender stereotypes” then why can’t this be a reasonable measure (of multiple needed) to tackle the very issue being used as an argument against the bill? @ScotTories