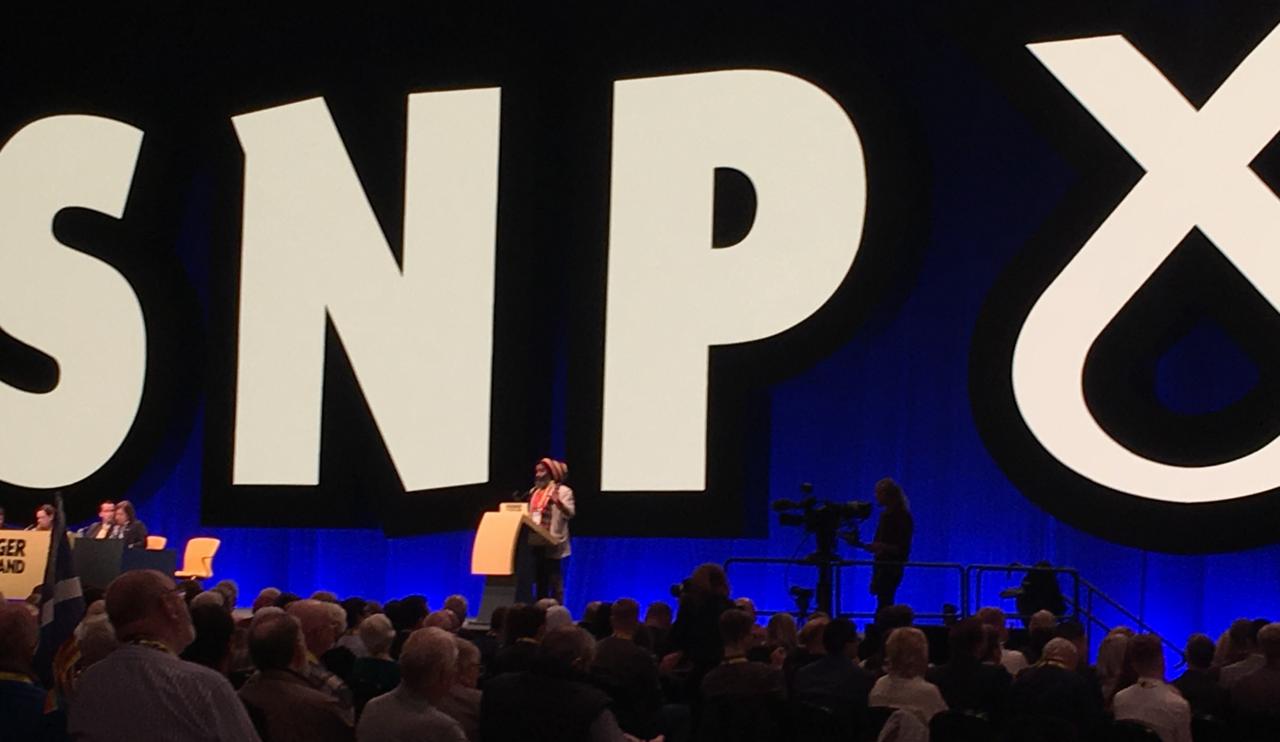 THE ISSUE of unconscious bias and common conceptions of “what racism means” in Scotland was raised at the SNP conference today (14 October), with members voting unanimously to call on all the governments of the UK to raise awareness of the issue.

An amendment put forward by the SNP Black and Minority Ethnic (BAME) network also passed unanimously, calling for the launch of an education programme on racism and unconscious bias within the party to be led by the new SNP Equalities Conference.

The resolution was put forward on behalf of the Glasgow Provan branch by former SNP MSP and MP Anne McLaughlan, who will stand as an MP for Glasgow East in the next General Election.

Several BAME members spoke in favour of the resolution, including Glasgow councillor Graham Campbell (pictured speaking today) and Renfrewshire councillor Michelle Campbell. Both are standing for the new position of BAME convener on the party’s National Executive Committee (NEC).

Speaking to CommonSpace, Graham Campbell said the resolution had been put forward to help challenge the view that in Scotland “there isn’t really a problem” with racism and a tendency towards “platitudinous comments about racism”.

He said: “The motivation is to start a debate and discussion about what we mean by racism.

“Too many people think racism is about prejudicial comments or thoughts and feelings, and too much of the debate around racism is about protecting white people’s hurt feelings rather than about the institutions that have the power to discriminate.”

Campbell said that, while Social Attitudes Surveys show that “we are a little bit less racist than England” and that minority people feel “more Scottish in their loyalties and affiliation” than their counterparts down South, this can not be used as an excuse to ignore the issue of racism in Scotland.

He added: “We are a small, North European country with a history of imperialism, racism and slavery, so of course we are not immune to it. We have white supremacy built in to our structures.

“To decontaminate ourselves from that means naming it, addressing it, shaming it and dismantling it. That can’t be done by passively ignoring it – it has to be actively dismantled by attacking some of the thought processes that are behind it and challenging institutional exclusions.”

Campbell said that Glasgow City Council had only begun taking conscious actions in the past few years to address the underrepresentation of BAME people in its workforce – around three per cent, compared to a 15 per cent population in the city – while cities in England had been taking similar actions for years.

He said: “We’ve only just started getting round to that, so there is a certain truth to what Jackie Kay had to say about us being behind.

“We are partly behind because we haven’t thought we had a problem, but very clearly we do, because of the way institutionalised racism has worked within our labour market and within our public life. We need to ‘fess up that.”

Earlier this year Scottish Makar (national poet) Jackie Kay raised the issue of racism in Scotland, stating that Scotland was “decades behind [England] in attitudes to race”.

Michelle Campbell, who proposed today’s successful amendment along with Kaukab Stewart on behalf of the BAME network, told CommonSpace that it “added action on to the sentiment”.

She said: “As a political party, we’re very supportive and very progressive, but that needs to have actions attached to it that are tangible.

“I think that was only right and responsible that we’re saying we’re not doing it perfect but we’re going to look at the way that we do it and how we educate our members to make sure we are getting that viewpoint forward so that we are the party at the helm of BAME representation.”

Campbell explained that in the course of her work as a councillor, she frequently encounters opposition politicians who do not share these progressive views – an experience which “chips away” at her.

She continued: “It’s incredibly frustrating the kind of language they can use, the attitude they can express.

“We have two councillors in the area that I’m in that have links to the far-right. Now, they might just be looking over in my direction but I have that hesitation of wondering ‘are they staring and having a certain viewpoint about me?’ That’s not right or fair.

“What does that say about our democracy, in terms of how we best represent the people around us? 0.8 per cent of the population in Renfrewhisre are from a non-white background. What message does that send to them about what we do as a community?

“That’s, in essence, what really, really does grate on me and chips away at me.”

SNP members will also debate an internal resolution today on improving representation of BAME, disabled people, and other minority communities in the Scottish Parliament, put forward by Alex Kerr, member of the NEC, MSP Humza Yousaf, and Young Scots for Independence.

The resolution calls on the NEC to “investigate whether selection processes can be modified to improve representation with a specific focus on the use of reserved political positions on regional lists for the next Holyrood Election”.

She said: “We all associate with ‘kent faces’: if you look and you associate with an individual who has the same skin colour as you, who says things in a way that you understand, who resonates with your backstory, you’re going to engage with the politics more.

“Therefore you’re going to have more BAME engagement in local communities coming forward into politics and that’s exactly what we need. We need to get better at that as a society as a whole.”

Graham Campbell told CommonSpace that he would also support the resolution, but said that we was “very clear” that this must not be”representational without being grassroots organised”.

He said: “My view on it is that having more candidates is nice – and I’m possibly in the category to be included in that – but it’s not as important as having black membership that’s actively involved in the party.

“It’s about how we’re going to get the link between self-organisation in the grassroots, so that anyone who is a representative is actually representative.

“There needs to be more active measures by branches and institutions within the party to reach out and make processes accessible to BAME membership.”

Campbell added that he hoped new party structures, including the Equalities Forum and new convener positions to represent protected characteristics, would help with this process.

He continued: “Once a convener is in place that person will be able to communicate with the members in that category so they can be mobilised and organised. That needs to happen first and then naturally BAME candidates will emerge.

“I’d rather it be that way around as I don’t want tokenistic appointing any black person who doesn’t necessarily have any black  politics.”

Voting for all of the positions on the NEC will take place on the final day of the SNP conference on 15 October, where the results will be announced.