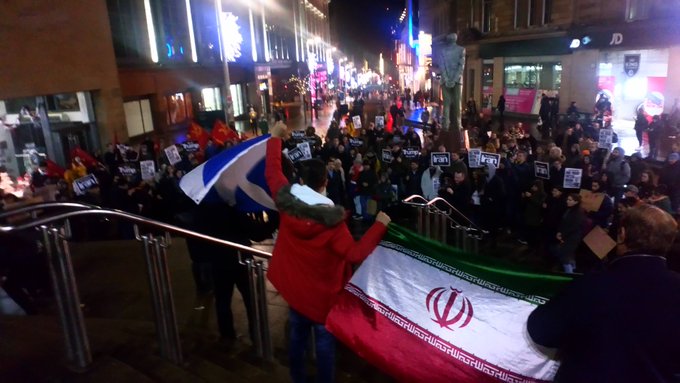 Protestors held an emergency gathering in Glasgow last night (6 January), as part of a global response to the US assassination of Iranian military leader Qasem Soleimani.

US President Donald Trump ordered the killing of Soleimani and a party of nine others, including an Iraqi official, near Baghdad International Airport on 3 January, causing an international outcry and raising tensions throughout the Middle East to new heights in the following days. Soleimani, a Major General in the Iranian Revolutionary Guards, was the leading military figure in the country and an erstwhile ally of the US in the recent fight against the Islamic State group.

The US assault, contravening international law and traditional rules of engagement on the soil of a key regional ally Iraq, has prompted fears around the world of military escalation.

Around 200 Glaswegians gathered at the Buchanan Street steps, where they chanted against Western involvement in the Middle East and called for an end to escalation. A further demonstration is planned for Edinburgh’s Princes Street on Thursday (8 January).

Addressing yesterday’s protest, Glasgow MSP Pauline McNeill said: “We stand here saying there will be no war with Iran; that the UK should not stand with America on this reckless policy. We will not be part of it, and we will speak out.

“The foreign secretary was an idiot in what he said on [Andrew] Marr – that he would set-out to de-escalate. Sorry, it’s too late. You have already been part of this dangerous, dangerous policy.”

British Prime Minister Boris Johnson issued a joint statement along side German Chancellor Angela Merkel and French President Emanuel Macron condemning Iran in the wake of the US attack. It does not mention the assassination, Trump or the US, but calls for de-escalation with an emphasis on demands towards Iran.

The statement reads: “There is now an urgent need for de-escalation. We call on all parties to exercise utmost restraint and responsibility. The current cycle of violence in Iraq must be stopped. We specifically call on Iran to refrain from further violent action or proliferation, and urge Iran to reverse all measures inconsistent with the JCPoA [nuclear deal].”

Responding to the UK Government’s stance on the war, Scottish First Minister Nicola Sturgeon said: “Boris Johnson made a statement last night, perhaps belatedly, he called for de-escalation and as far as that goes that is welcome.”

She added that she was concerned that the UK may be brought along with “support for whatever the United States now thinks is the right course of action.”

Speaking at the Glasgow rally, anti-war activist Jonathon Shafi argued that Scots must actively resist collusion in any US war drive.

“We will say loudly and clearly that Scotland opposes Trump, opposes US and UK intervention and stand for peace.”

Read more – ‘The ground feels unsteady’: Exposed CIA spy on why Iraq was ‘one of the worst foreign policy decisions in history’ and its consequences

Relations between Iran and the US have worsened since the beginning of the Trump presidency and nosedived since the US unilaterally abandoned its commitments in the Joint Comprehensive Plan of Action (JCPoA) or Iran nuclear deal. However, international observers were still shocked by the sudden decision by Trump to kill the leading Iranian figure.

Iranian officials have pledged retaliation for the act, and have announced they will lift all limits on their uranium enrichment programme. In response, Trump threatened on twitter that he would attack dozens of Iranian sites in a “disproportionate” response, including non-military “cultural” targets.

Millions marched in Iran and around the region as part of the funeral for Soleimani.

The killing also had a major impact in Iraq, where, 17 years after the US and UK invasion in 2003, the national parliament has voted unanimously for all foreign troops to leave the country – including 5000 US and around 400 British forces.

The US military initially released a letter indicating it would now withdraw from Iraq, only to release another statement around half and hour later saying this was a “mistake”.

The Edinburgh protest will take place at from 5:30pm Thursday 8 January at the Wellington Statue on Princes Street.