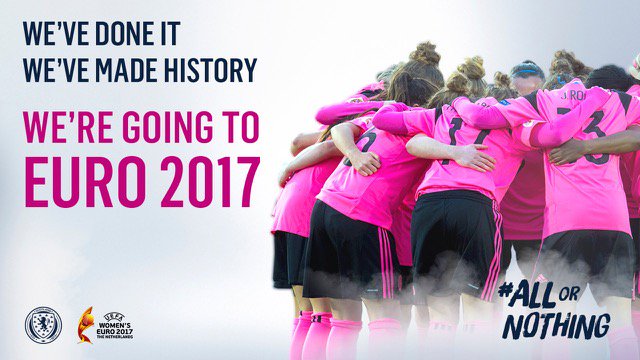 SCOTLAND will be represented at its first senior football championships for almost two decades.

The Scottish women’s team have official qualified for the Euro 2017 championships that will take place in the Netherlands next summer.

Victories in six of Scotland’s qualifying matches was enough to qualify as one of the top performing sides with a game to spare.

The qualification marks a historic step-up for the squad, as it’s the first time the women’s national senior side have qualified for a major championship.

Qualification also ends an 18 years drought for the Scottish Football Association, which has seen both the men’s and women’s teams come painfully close to major championships on countless occasions.

The national side, managed by Anna Signeul, becomes the first senior Scottish side at a championships since Craig Brown managed Scotland at the France 98 world cup.

Scotland’s qualifying campaign included a 10-0 victory at home to Macedonia, and a 7-0 win at home to Belarus.

Jane Ross is one of the top scoring players in the competition with eight goals in seven games.

Scotland officially qualified due to Finland’s 3-2 defeat to Portugal, meaning the side will definitely receive an automatic place at the finals irrespective of their result against Iceland next Tuesday.

Signeul, celebrating the result, said: “To qualify is a fantastic achievement. I'm so proud of all the girls. We can't wait for the Euros next summer!”

Captain Gemma Fay added: “To all of the Tartan Army, if you don't have plans for next summer, we'll see you in Holland for Euro 2017!”