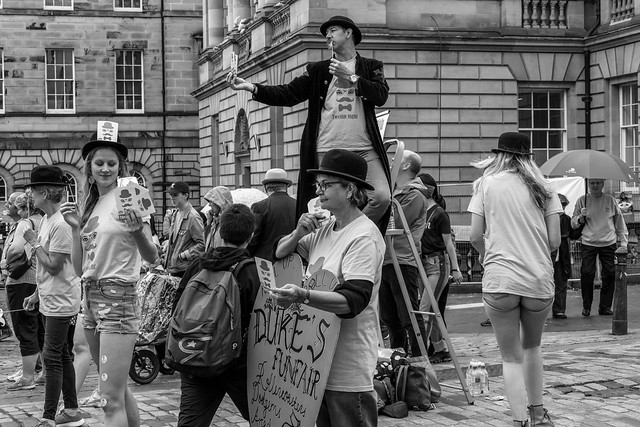 CULTURE Secretary Fiona Hyslop has aggressively reaffirmed the Scottish Government’s determination to welcome international artists seeking to participate in the Edinburgh festivals amidst growing concerns over the amount of performers being refused entry into the UK.

Speaking during a Scottish Parliament debate on the issue brought forward by Edinburgh Pentlands SNP MSP Gordon MacDonald, Hyslop also announced a new upcoming summit on visas for international artists, to which she has invited the Home Secretary and her counterparts in other devolved UK administrations.

Today’s debate, secured by MacDonald in February, follows numerous reports from organisers and participants in Edinburgh’s festival system of visas for international artists being rejected, and tied upon with bureaucratic difficulties associated with the UK Government’s ‘Hostile Environment’ policy. Concerns have also mounted over the potential impact of Brexit on the Edinburgh festival season’s international character.

Speaking ahead of the debate, MacDonald said: “Edinburgh Festival is the world’s largest arts festival and Edinburgh is well recognised as the world’s leading festival city. With audiences of a staggering 4.5 million, the festivals generate an incredible economic impact of £280 million in Edinburgh and £313 million in Scotland in total.

“Our reputation is being damaged and our international positioning being put at risk because of the UK Government’s hostile immigration policy.

“Artists are facing a humiliating application process. Their visas are being refused. And, due to the inaction from the UK Government, artists are being deterred from coming here.” SNP MSP Gordon MacDonald

“Artists are facing a humiliating application process. Their visas are being refused. And, due to the inaction from the UK Government, artists are being deterred from coming here.

“Last year, the international book festival had about a dozen individuals struggling to obtain a visa and, the year before, their own artist in residence couldn’t get over. In 2017, the Arab arts showcase had a third of their visas denied. Quite frankly, this is an utter shambles and completely unacceptable.”

MacDonald continued: “The Edinburgh festivals rely on the seamless flow of artists from across the world and it’s time for the UK Government to listen. Listen to the industry and take action to make sure that Edinburgh, Scotland and the UK are open for culture.

“If they won’t listen, then they should devolve immigration and let the Scottish Government get on with building a fair and functional immigration system.

Sara Shaarawi, project manager of the Arab arts showcase, also commented: “How the Home Office dealt with us was appalling and the reasons of refusals were flat out lies.

“We had a crew member that was refused because he’d never been in the UK, when in reality he had been in the UK with a show in 2009 and in 2012. We had a Palestinian artist who applied twice and one of the refusal letters spoke repeatedly about their circumstances in Egypt, when in reality he wasn’t based in Egypt. One letter was simply empty, they didn’t remember to fill in the ‘reason of refusal; section.

“We paid for premium services which should take five days and it would actually take weeks, we dealt with unnecessary delays and anxieties and were given no reason as to why passports were being held.”

Concluding the debate, Hyslop said: “The Scottish Government has long-stand concerns around how readily artists and performers can come to Scotland for the Edinburgh international festivals, and problems with delayed visa processes, refusals, and indeed refusals which are overturned at the very last minute.

“Year on year, festivals around Scotland and indeed the United Kingdom have been plagued by uncertainty around visas. Sometimes, even the same artists repeat issues one year to the next, and this is unacceptable.

“Every year, it seems, the internationalism of our festivals and the open and welcoming message we strive to send risks being confused and muddied by persistent visa issues.” Culture Secretary Fiona Hyslop

“It is our international standing as a leading centre of global cultural discovery that is also jeopardised. Something has to change.”

Hyslop went on: “Every year, it seems, the internationalism of our festivals and the open and welcoming message we strive to send risks being confused and muddied by persistent visa issues that prevent and delay those wishing to visit and contribute their creativity and culture. The Scottish Government has regularly raised concerns with the UK Government around the challenges for international artists and performers coming to participate in our festivals. Indeed, these are issues that occurred long before the added chaos and uncertainty foisted upon us by Brexit.

“A better solution for visiting artists, performers and others must be integral to any future immigration system, and that’s particularly important if Freedom of Movement is to end.”

Hyslop informed parliament that she has written to the Home Secretary urging the Home Office to work with the Scottish Government and other devolved administrations to address issues surrounding visas for international artists, and will be inviting the Home Secretary and her counterparts from other devolved administrations to attend a summit at the Edinburgh International Festival to find solutions to these problems.

“To those who have faced challenges in coming here,” Hyslop concluded, “we are clear: Scotland remains open. Open to the unrivalled pleasure of the arts, open to cultural exchange, and open to visit. It is time that the immigration system recognised that.”