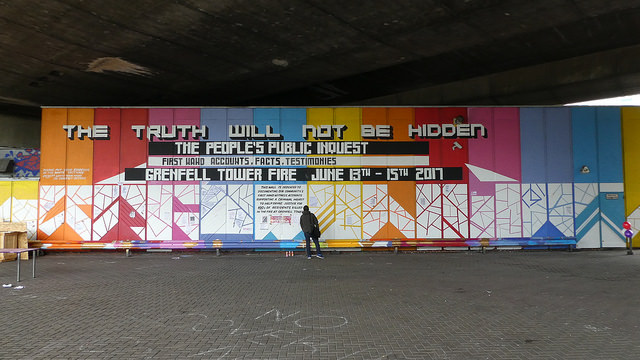 As trade unions and campaigners prepare for displays of remembrance, Living Rent say that communities like Grenfell “must never again be sacrificed to the interests of profiteers.”

VIGILS for the victims of the Grenfell disaster have been announced to coincide with both the one year anniversary of the event and a solidarity march taking place in London.

In Edinburgh today [14 June], a commemorative event organised by the Edinburgh Trade Union Council will begin on the foot of the Mound at 6pm, beginning with a 30-minute silent vigil.

72 volunteers will each carry a photo placard portraying the victims of those who died in the Grenfell fire on 14 June 2017. The vigil will be followed by speeches from representatives of the Fire Brigades Union, the Edinburgh Tenants Federation, and the Living Rent campaign.

In Glasgow, a similar vigil has been planned for Saturday, 16 June, at 1pm in Glasgow City Centre, at the same time as a solidarity march of friends, family and supporters is taking place in London.

In 2017, hundreds gathered in Glasgow mere days after the tragedy to show their support and condolences for the relatives of those lost in the blaze, as well as for the hundreds rendered homeless by the fire which destroyed their lives.

READ MORE: Ben Wray: The victims of Grenfell deserve more than resignations – here’s what we should do

Earlier today, a London Underground driver halted his train on a bridge near Latimer Road station and waVed a green banner in support of those holding a memorial vigil for the Grenfell victims. At the Hands Off Our Parliament protest outside the Scottish Parliament today, several minutes of silence were also observed, out of respect for Grenfell.

While displaying their sympathy, campaigners have noted that many unanswered questions about the disaster remain, and that families and friends of the victims still await appropriate justice. Organisers of the Glasgow vigil have said that the event will “keep up the pressure” on authorities to provide satisfaction to all those affected.

A Living Rent spokesperson said: “A year on from the Grenfell fire, we will once again be gathering in Glasgow to demonstrate our solidarity with the victims of the tragedy, and remember the lives of those who died. We are echoing the call from the families that such a disaster must never again be allowed to happen.

“We will be on the streets to demand that the ongoing public inquiry is not a whitewash and that truth and justice is delivered.” Living Rent spokesperson

“We will be on the streets to demand that the ongoing public inquiry is not a whitewash and that truth and justice is delivered. The Hillsborough families, who have stood shoulder to shoulder with those of Grenfell, show that the state alone cannot be trusted to deliver this.

“As Scotland’s Tenants’ Union, we are committed to fighting for affordable, adequate, safe housing for all tenants, wherever they are. Only this will ensure such a disaster never blights a community again.”

The public inquiry referred to by Living Rent was ordered by Prime Minister Theresa May the day after the Grenfell fire. The inquiry aims to determine what precisely happened, why it happened, and what can be done to prevent any similar instances occurring in future.

In May of this year, a UK Government review into building regulations initiated after Grenfell concluded that there had been a “race to the bottom” in building safety practices, under which cost was prioritised over safety. The government’s reviewer, Dame Judith Hackitt, advocated that a new standards regulator should be part of a reformed system, but also suggested that the combustible materials responsible for the fire should not be banned.