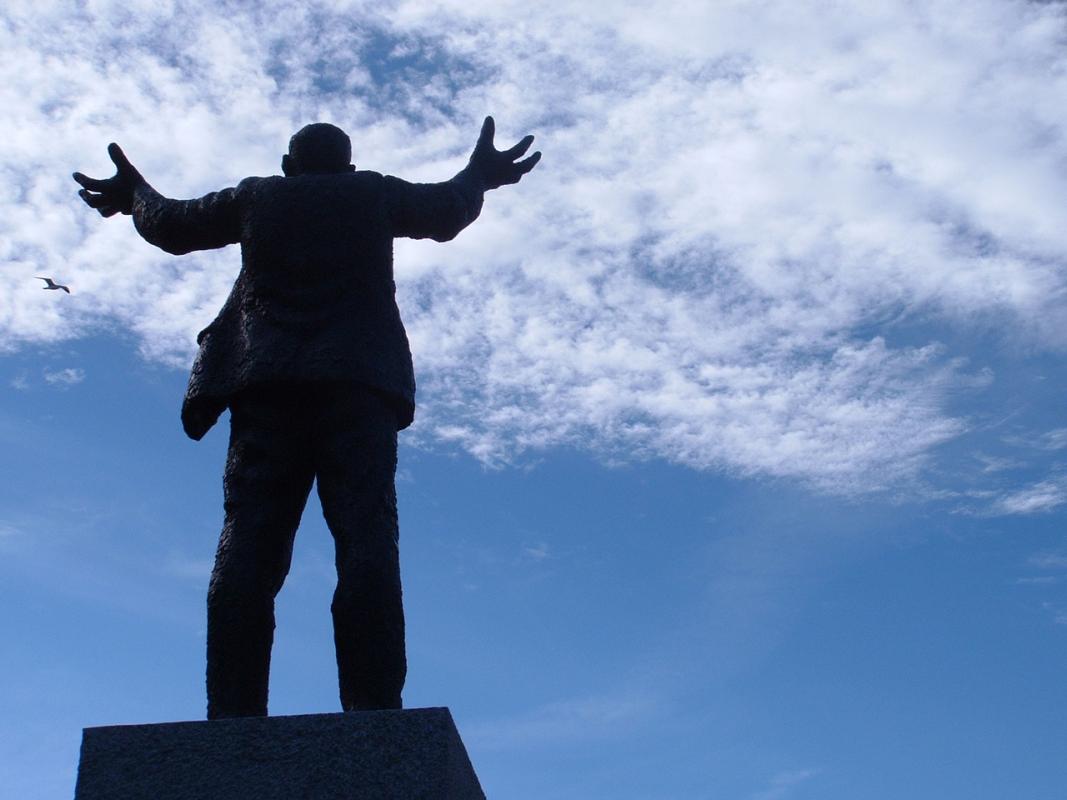 Leading SNP figures will propose Sterlingisation for an independent Scotland at the forthcoming SNP conference, noting that Ireland did this in the 1920s. But is this really a model for Scotland nearly 100 years on? CommonSpace speaks to two prominent Irish economic historians to find out.

IT is common in the Scottish independence movement to compare the current state of the country to the relative social prosperity of neighbours.

Norway has been an indy movement staple for years, as was Ireland for a time before the collapse of the so-called Celtic Tiger economy with the global crisis of 2008.

Now the contemporary debate about the economics of independence is being transformed by the SNP’s Growth Commission (GC), led by GC chair and business lobbyist Andrew Wilson. It’s controversial recommendations include restrictions on public spending in a newly independent country and the maintenance of regulatory alignment with the City of London.

But the sharpest thorn is undoubtedly the document’s currency proposal; that the new state should eschew establishing it’s own currency in favour of starting life with what is commonly known as ‘Sterlingisation’ – the continued and informal use of Sterling without recourse to monetary powers. Critics maintain that these measures would tie Scotland into the UK’s hyper-financialised economic model and strip the new country of sovereignty and economic security, making it vulnerable to economic fluctuations.

In their motion to the forthcoming party conference, SNP Depute leader Keith Brown MSP and Finance Secretary Derek Mackay MSP enlist a curious historical parallel to bolster faith in this case (which they propose could end if a Scottish currency meets six tests which will be assessed on an annual basis).

They refer to an obscure and quite tragic political experiment almost a century old. One which, owing to its failures, has few outspoken defenders in the contemporary era; the Irish Free State.

Brown and Mackay’s motion reads: “…the pound sterling is a shared currency across the UK and is available for Scotland to use, just as Ireland did for an extended period.”

Ireland in fact only “used Sterling” from 1922, with the establishment of the Free State, until 1928 when the new Saorstát pound entered circulation – but the currency continued to be pegged 1:1 with Sterling for the next five decades.

“I think the Free State is probably a bad example,” Gerard McCann, Senior Lecturer in International Studies at St Mary’s University College at Queen’s University, Belfast and author of ‘Ireland’s Economic History: Crisis and Development in the North and South’, tells CommonSpace.

“The early years were an absolute financial mess. The Southern Government was dependent on the returns from Guinness. About a third of GDP depended on Guinness.

“Ernest Blythe who was the first Minister of Finance in the south constantly boasted of keeping the state finances under £20 million, which even then was a pittance. It meant the wholesale run-down of public services. I don’t think those early years are a good example to work from.”

One consequence of early austerity was that an increasing number of public services were taken on by the Catholic Church – different governments solidified this relationship over decades, building a regime around social conservatism and deference to Church hierarchies, with devastating consequences for women and the poor.

1920’s Ireland was a troubled and turbulent place. The country’s existence as a colony of its powerful neighbour meant it had largely missed out on the great leap in industrial development in the late 19th century.

An armaments boom that peaked in 1918 was snuffed out by the short depression of 1920-21. The economy had been badly disrupted by years of war and civil war. Entire commercial centres, like Cork city in the island’s ‘rebel county’ were destroyed by British forces. Boycotts and strikes had become a part of the national struggle.

The most notorious aspect of the Treaty signed with Britain in 1922, and which provoked the civil war, partitioned the Island North and South, further warping Irish society.

“There was mass emigration,” says McCann, “there was impoverishment of the levels that you would probably have to go back to the 1860s to find an equivalent.

“The horse and cart was re-introduced as a means of transport in Dublin in the 1920s, because it didn’t have the transport infrastructure, the trains weren’t running, the cars didn’t have fuel. It was a bleak, bleak place at that stage.”

The Irish Free State was not, despite the title, a free state. It was a Dominion within the British Empire, part of a second tier of semi-autonomous states.

The sovereign of the state was the British King, represented by a Governor-General, himself the replacement for the Lord Lieutenant – the head of the colonial administration in Ireland.

Members of the Irish Parliament, under the terms of the peace treaty, had to swear an oath of allegiance to the British crown.

Perhaps most importantly of all, this new regime was partly the product of an imminent military threat. Ireland’s closest neighbour was the most powerful Empire in the world, and it threatened “terrible and immediate war”, according to lead Irish negotiator Michael Collins.

This all had profound implications for Ireland, which now operated as a Satellite of its larger and more powerful neighbour, with powers split between London and Dublin. In fact the Treaty did not force currency alignment on the Free State – it chose this due to a political will to avoid divergence.

Brian O’Boyle, a lecturer in Economics at St Angela College Galway and co-author of “Austerity Ireland”, says this was a structural political and economic relationship: “They call it the ‘Treasury view model’ and that’s telling in itself – that it’s the British Treasury that view comes from.

“They were looking to build a state in the image of the former state. The main thing Cumann na nGaedheal (pro-Treaty forces which formed the Free State government) were looking for was sovereignty to some extent, but really political and economic stability.

“They looked to pre-existing economic relationships.

“The City of London would have facillitated the trade between Anglo-Irish farmers in Ireland and British Capitalism. It’s often called the ‘development of under-development’.”

Underdevelopment is a common consequence of colonial economic relationships, a signature feature of which is a narrow economic base – in Ireland’s case an agrarian economy concentrated into large landholdings, themselves controlled by a traditionally privileged Anglo-Irish caste.

Read more: The SNP’s proposed currency position is not all it seems

“In order to facilitate that process, usually you hear that they wanted laissez faire, free trade terms on agricultural products but they also needed a Sterling peg to keep exchange-rate fluctuations out,” Boyle explains.

“It was a very austere decade whereby social spending was basically frowned upon by the department of finance.”

But in fact, the dependency on traditional economic ties encouraged even greater dogmatism from the Free State architects, O’Boyle argues: “As you may know, Britain had introduced a slightly more stringent corporation tax after WW1 to make up for the costs of the war.

“Cumann na nGaedheal inherited all the infrastructure from the previous state. But what they did in a very notable way is they increased the threshold at which you’d pay that corporation tax.

“So that’s indicative of that attempt at a low tax, low spend, free trade model that keeps the pre-existing economic relationships going and the cornerstone of all that was Sterling.”

As Irish Revolutionary and 1916 Rising leader James Connolly had warned, what had changed in the Free State was merely the colour of the flag.

Read more:  Micro-politics isn’t enough – we must address the partition of Ireland

The dominance of existing class interests, around the Irish banks and big landowners, facilitated the continued relationship with Britain and the further immiseration of the Irish working class and rural poor.

“I’d imagine the City of London and the big industrialists were in the ear of the British saying to people like Lloyd George do some sort of a deal because what we don’t want is the mass unrest in Ireland to spill over into a major revolt.”

As the Irish economy began to emerge from Dominion status under Eamon De Valera’s Fianna Fáil “the currency was the contradictory part,” says O’Boyle.

“The main problem was the British economy was far more productive, and therefore unit costs in Britain would have been lower than in Ireland. What Fianna Fáil were grappling with a decade on was ‘how do we build a protectionist economy’ that can actually start to grow industrial enterprises to compete – if not on an international scale, at least with Britain. They were thinking ‘we need to do this from behind some protectionist walls’. In the first decade though you were trying to build free trade so that wasn’t open to you.

“As long as you kept the currency pegged, you were setting an over-valuated exchange rate for your industry because British goods are cheaper.”

Ireland continued to be plagued by poverty and under-development, high levels of unemployment and weak economic policy until the 1960s. The early decisions that established the state cast a very long shadow that still touches the modern Irish state, which has been rendered vulnerable by a lop-sided, heavily financialised economy with periodic bursts of high unemployment and emigration.

Throughout this period, the state suffered from an under-furnished monetary infrastructure, argues McCann.

“Currency was circulated through the banks in the south, but by and large financial control was a hybrid of the financial services in London, the awkward arrangements around the Dublin administration which didn’t really have that much understanding of financial arrangements until the 1970s.”

The Irish model throughout this time shares important similarities with the GC model – a lack of a central bank for the first two decades (the Southern state had a monetary board instead) and therefore a substantial influence from the City of London and British Treasury.

The link with Sterling wasn’t broken until 1978, when Ireland joined the European Exchange Rate Mechanism. It wasn’t until the same year that an independent mint was established in Ireland, and it wasn’t until 1986 that the physical coinage of the Punt departed in shape and size from the British Pound.

Years of conservatism under a form of Sterlingisation, followed by decades of alignment. The cost in prosperity and people hard to measure, the loss in democratic sovereignty beyond doubt.

But there remains one startling difference between Sterlingisation in Ireland and that proposed for Scotland. Ireland adopted these conditions under the threat of war by a global Empire.The GC offers-up Scottish sovereignty under no such duress.