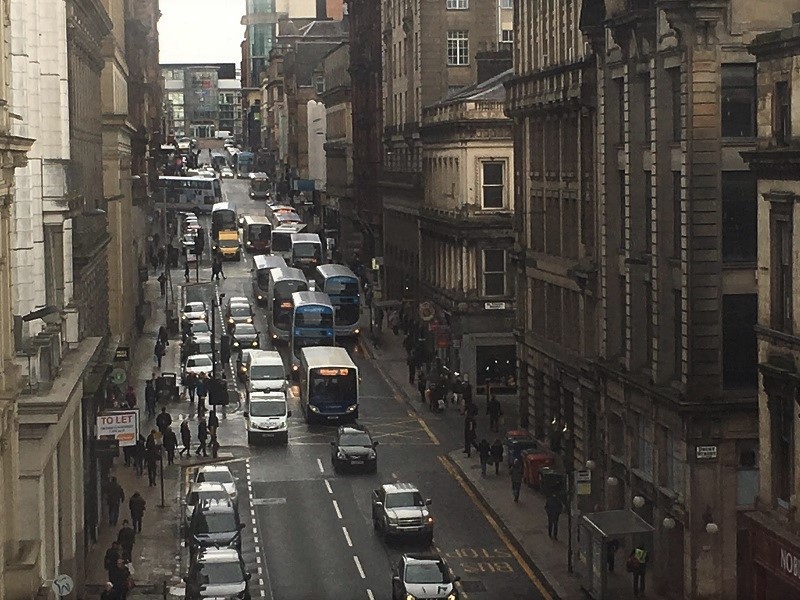 GLASGOW CITY COUNCIL has published proposals to introduce a Low Emission Zone (LEZ) in Glasgow, but campaigners have criticised the proposals which will only crack down on bus pollution in the initial phase.

Announced earlier in 2018, the city centre zone will come into effect at midnight on 1 January 2019, with bus companies expected to use government funding to ensure their vehicles are compliant with emissions targets.

Labelling the proposals a “no ambition zone’, Friends of the Earth campaigners said the rules would only apply to 20 per cent of busses by the end of 2018 and criticised the lack of plans to advertise the zone with signs or use cameras to catch offenders.

Emilia Hanna, an air pollution campaigner, said: “The proposals condemn Glasgow to illegal air for years to come and must be urgently improved. Councillors must recommend these proposals be significantly improved when they discuss them next week or they will have failed the people of Glasgow who suffer daily from the health impacts of air pollution.

“What Glasgow does also sets the benchmark for the LEZs to come in Aberdeen, Dundee and Edinburgh in 2020, so it is critical to set the bar high.”

In 2010 the Supreme Court unanimously ruled that “immediate action” should be taken on the illegal levels of nitrogen dioxide present in Glasgow’s air.

Other Scottish cities such Edinburgh, Dundee and Aberdeen are also expected to launch LEZs by 2020.

Hanna continued: “A Low Emission Zone should keep polluting vehicles out of the most polluted places.

“This plan is even worse than initially envisaged, not only will the Zone fail to catch dirty vans and lorries but it will only apply to a tiny fraction of buses. A Low Emission Zone which has no signs to mark it, no new cameras to catch offenders and continues to allow almost every dirty vehicle into the city centre, is not a Low Emission Zone.

“The bus industry and the dinosaurs at [Scottish] Government agency Transport Scotland have succeeded in making sure the Glasgow LEZ proposals will fail to achieve clean air by 2020, the Scottish Government’s target date for compliance with safety standards.”

She added: “The bitter irony is that the Scottish Government has already allocated more than £10m for developing LEZs and at least £10m in loans for companies to buy cleaner buses, which is enough to retrofit or replace every older bus in Glasgow by the end of 2018.

“The council must be bolder and reform its proposals to require that 100% of buses travelling through Glasgow City Centre are Euro 6 compliant by the end of the year.”

Councillor Anna Richardson, city convener for sustainability and carbon reduction, said: “While we continue to work with the bus industry to improve services – services which are vital to the lives of Glaswegians – it’s recognised that the introduction of a LEZ needs to be proportionate and managed in such a way that ambition and practicality can be balanced.

“That is why the initial phase of the LEZ will address local buses through Traffic Regulation Conditions (TRCs) set by the traffic commissioner.

“Buses will be expected to meet the Euro VI emission standard by December 2022. All other vehicles will also have to be compliant by that date.