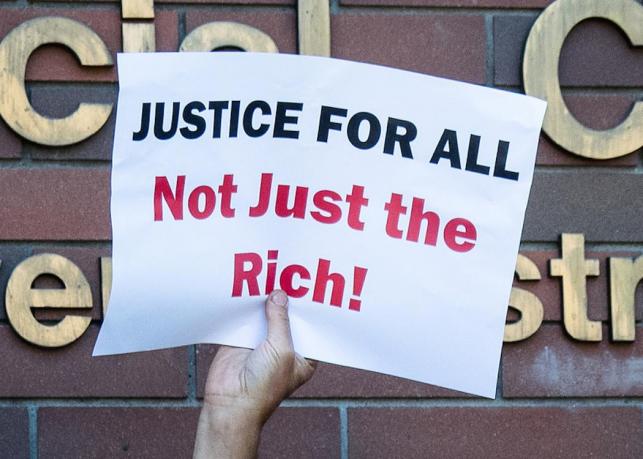 A REPORT ON global wealth published by Oxfam on Monday reveals that the economy continues to drive inequality and poverty while a “super-rich minority” get richer.

Oxfam found that the UK, and indeed Scotland, was no exception to this rule, with the wealthiest one per cent in Scotland owning more wealth than the bottom 50 per cent put together.

Globally, the richest one per cent own 82 per cent of the world’s wealth.

The report, Reward Work, Not Wealth makes the case that this model is unsustainable, and that it is possible for the economy to be redesigned to create a fairer system.

READ MORE: Jamie Livingston: The economy rewards wealth, not work – but we can change it

Dr. Katherine Trebeck, Oxfam’s Senior Researcher in Glasgow, commented on the findings: “It’s grimly apparent that the inequality crisis is out of control. The economic system is set up in a way that enables a wealthy elite to accumulate vast wealth at the expense of hundreds of millions of people who are scraping a living on poverty pay.

“This isn’t a faraway crisis. We know that in Scotland, having a job doesn’t always mean escaping poverty: the vast majority of working age people living in poverty here live in a home where someone’s got a job.”

The report suggests that, on a global scale, excessive corporate influence on policy-making, the erosion of workers’ rights and a drive to minimise costs in order to maximise returns have contributed to the widening gap in wealth.

From 2006 to 2015, the report found, the wealth of billionaires rose by 13 per cent per year, six times faster than the wages of the average worker.

The research also found that in Scotland, as with around the world, women continue to have lower incomes and are concentrated in the lowest-paid, least-secure forms of work. Globally, it is anticipated that it would take 217 years at the current rate of change to close the pay gap.

In Scotland, recent analysis by Close the Gap found that women make 15 per cent less per hour than men.

This situation, Trebeck suggested, is not inevitable. “Our economic system can be designed not for the wealthy, but in a way that creates a human economy,” she said.

Trebeck said:  “People around the world and in here in Scotland are ready for change. They want to see workers paid a living wage; they want corporations and the superrich to pay more tax; they want women workers to enjoy the same rights as men; they want a limit on the power and the wealth which sits in the hands of so few.”

A 2015 study by Oxfam Scotland found that 75 per cent of people in Scotland supported a more equal distribution of wealth, while two thirds believed politicians should be doing more to address economic inequality.

Trebeck continued: “The Scottish Government has a golden opportunity to lead the way towards a fairer future working with others to demonstrate that it’s possible to make our economies work for everyone and not just the fortunate few.

“Our country may be small but our ideas can be big and they can resonate far beyond our borders.”

Writing for CommonSpace, Head of Oxfam Scotland Jamie Livingstone suggested that “political solutions” such as taxation and public spending could be used to address the crisis, and welcomed the fact that the Scottish Government was laying out a number of plans with this aim.

Livingstone said that the recently established Poverty and Inequality Commission and moves towards more progressive taxation were positive developments.

As a next important  step, Livingstone argued for “adopting measures of success beyond economic growth” – echoing criticisms of the focus on GDP made by economists last week when new figures on growth were released.

A spokesperson for the Scottish Government responded to the report: “We are committed to reducing the deeply ingrained inequalities that exist across Scotland and tackling the underlying causes of poverty and inequality.

“We are taking forward a number of bold measures – from our recently passed Child Poverty Act which establishes Scotland as the only part of the UK with targets to tackle child poverty, to our drive to create a fairer country through our Fairer Scotland Action Plan.

“Tackling inequalities will never be an optional extra for this government – it is core to everything we do – to make Scotland a fairer, more equal country.”