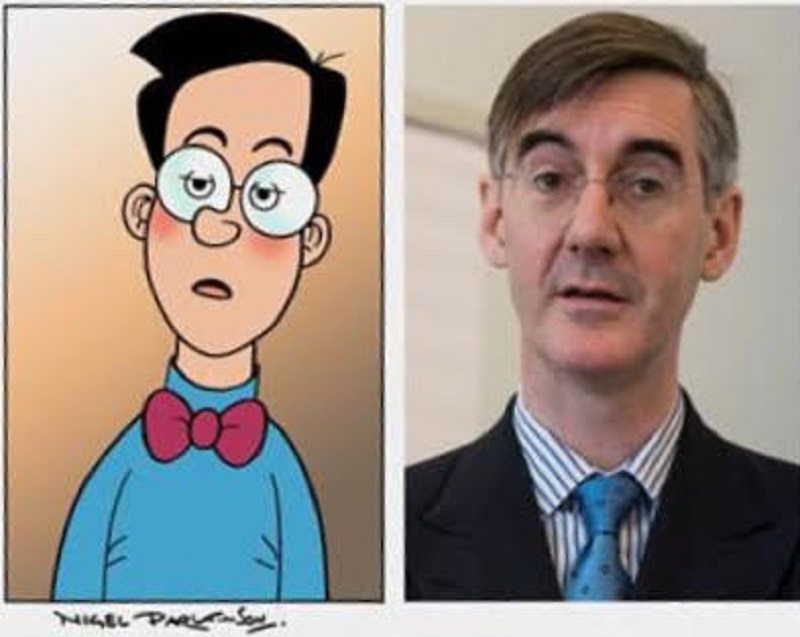 In a ‘cease and desist’ letter, the Dundee based company accused the Brexiteer-MP of copying the “snootiness” of its character

THE SCOTS COMPANY behind Britains longest running comic The Beano has issued a cease and desist letter to the eurosceptic MP Jacob Rees-Mogg, accusing the Tory of masquerading as its character Walter Brown.

The children’s comic sent the letter to the North East Somerset MP, who insisted he was “flattered” to have been accused of masquerading at the Beano character.

The letter, sent by Mike Stirling, the head of BeanoStudios, accused Rees-Mogg of copying their characters traits, including his hair parting and style, distinctive glasses, spotty ties and vintage clothes, his snootiness and “insistence to remind others of his father’s successful career”.

It’s come to our readers attention that @Jacob_Rees_Mogg has been masquerading as Beano character Walter Brown. A clear breach of our copyright. pic.twitter.com/voWQZ5VkPS

Walter the Softy is the arch-nemesis of legend Dennis the Menace in the children’s comic.

Stirling said in the letter it was evident that Rees-Mogg had used the “trademarked images and brand essences” of the character to the benefit of enhancing his career.

“We firmly request that you cease and desist in your ongoing impersonation of the character, which remains the exclusive property of Beano Studios.

“A swift response on this matter would be greatly appreciated to avoid getting Teacher involved,” the letter said.

The MP responded on Twitter, saying: “I am flattered to be accused by the Beano’s legal eagles of imitating Walter the Softy whose powerful physical prowess is so much greater than my own.”

Rees-Mogg enjoys cult fame amongst the Tory right, known as an ardent Brexiteer and an opponent of LGBT+ rights.

Picture courtesy of The Beano