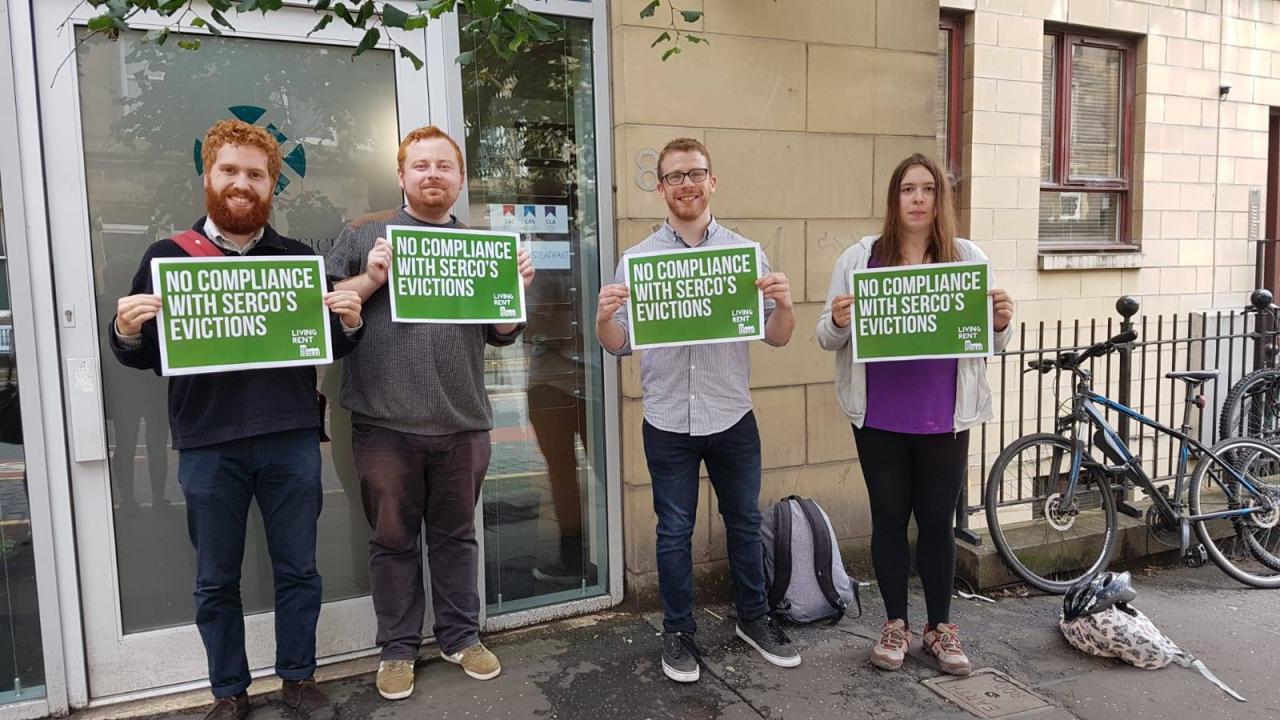 THE OFFICIAL body of Scottish landlords has come out in opposition to plans by government contractor Serco which could leave over 300 asylum seekers homeless in Glasgow, describing the proposals as “abhorrent”.

The response came hours after Scotland’s tenants’ union, Living Rent, lobbied the representative body of Scottish landlords and letting agents and asked them not to comply with the proposed evictions.

Serco, which houses thousands of asylum seekers on behalf of the Home Office, rents properties from hundreds of Scottish landlords, letting agents and housing associations in order to house those seeking refuge in the UK.

In a move which Glasgow City Council insiders said could have prompted a “humanitarian disaster”, Serco proposed to carry out lock changes which would make over 300 “failed” asylum seekers homeless, but the company was forced into a temporary retreat after court action questioning the legality of the firm’s plans was launched.

Housing law in Scotland requires landlords to obtain court permission before evictions can take place, but Serco argued it was able to ignore due process as asylum seekers did not enjoy the same rights as ordinary Scots tenants.

John Blackwood, chief executive of the Scottish Association of Landlords [SAL], said criticised Serco’s plans to ignore normal legal due process: “SAL finds it abhorrent that any accommodation provider would evict tenants by simply changing locks rather than following the appropriate due legal process to evict.”

“SAL has always worked closely with the Scottish Refugee Council and is keen to collaborate with them, and others, in a multiagency approach to help support those seeking asylum.

“We encourage any of our members who are concerned about the actions of SERCO to contact us for further advice and assistance to ensure they comply with the law.”

One housing activist told CommonSpace they surprised and impressed with how bold SAL’s statement was and said they hoped it would encourage members to resist the evictions by Serco.

“Serco’s plans have shocked all of Scotland with their callousness. Now, with even the Scottish Association of Landlords speaking out against them, it is more clear than ever that they need to scrap the proposed evictions.” Living Rent campaigner Gordon Maloney

Serco said that the Home Office was no longer reimbursing it for providing the accommodation of the “failed” asylum seekers, many of whom still have legal options open to appeal the UK Government’s decision on their case.

Craig Paterson, Living Rent spokesperson, welcomed the comments from SAL: “We are encouraged by the response from SAL, the list of those opposing SERCO’s plan to illegally evict people is growing rapidly by the day.

“We have sent out over 1100 letter to landlords and are in the process of meeting with letting agents across Glasgow to encourage them to join the opposition to SERCO. We will continue to build in our communities and resist any and all attempts to evict our neighbours.”

Glasgow housing associations which provide properties to Serco were also unimpressed by the proposals, with the one writing to the company to say that any unauthorised lock changes would be a breach of contract between Serco and the housing association.

Gordon Maloney, a Living Rent campaigner who was part of the group which delivered the letter to SAL, said: “Serco’s plans have shocked all of Scotland with their callousness. Now, with even the Scottish Association of Landlords speaking out against them, it is more clear than ever that they need to scrap the proposed evictions. There can be no justification for what they’re doing.

“Housing is a human right – not some luxury to be ripped away from people. Both Serco and the Home Office need to see sense and change course.”

Serco is being challenged in court over its decision by the housing charity Shelter Scotland as well as a leading housing justice lawyer, solicitor advocate Mike Dailly, who is acting on behalf of some of those affected.

The decision is expected to be challenged on a number of legal arguments, including through ordinary Sot housing law but also by using human rights precedent set by the European Court of Human Rights.

UK Labour leader Jeremy Corbyn is expected to speak with some of those asylum seekers affected during a pre-arranged visit to Scotland this week.