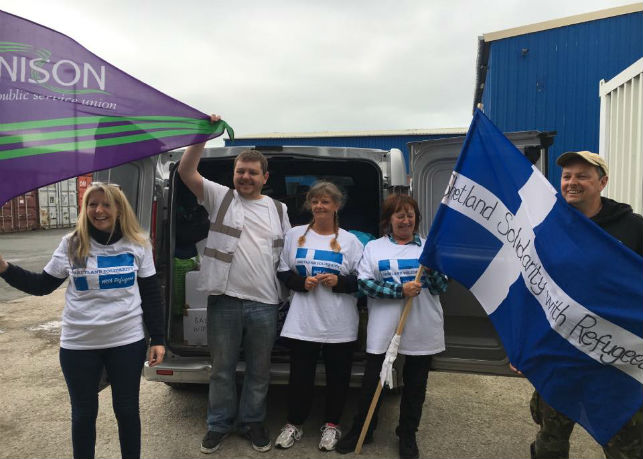 The Shetlanders had originally sought to join a 250-strong aid convoy departing from London on Saturday [18 June], but it was blocked at the French-UK border in Dover by police.

Speaking to CommonSpace about their journey, Shetland Solidarity with Refugees activst Kaila McCulloch said the groups was motivated by the extreme need in the Calais camp, where 5000 refugees are stuck, blocked from entering the UK, having fled from war and economic collapse.

She said: “We knew that supplies were running low at Calais, and we decided to put out a call for food, toiletries and other basic things. The people of Shetland were, as ever, very generous in giving donations. We filled our van completely with supplies.”

“We heard rumbling as we were boarding the ferry in Shetland on Thursday [16 June] that there would be a blockade in Dover.

“We resolved we would carry on, but we had no communication on the boat.

“When we landed in Aberdeen we discovered that there was a ban. We decided to go to Hull instead, and from there took a boat to Belgium.

“Once we had landed it was about 70 miles to Calais, and there we met up with the charity we were hoping to donate to – Care for Calais.

Condemning the border police’s decision McCulloch said: “I think it’s a terrible decision. There was no trouble to be expected from the convoy, it was about getting aid through to people in the camp.”

The Shetlanders were initially hoping to join the Convoy to Calais, which was organised by groups including the People’s Assembly Against Assembly and Stop the War coalition and sponsored by trade unions including Unite, FBU and the CWU.

Glaswegian solidarity activists were involved in a confrontation between the convoy and French border police in Dover.

Gregor Clunie who organised two minivans full of supplies from Glasgow told CommonSpace that others at the border were supportive of the convoy.

He said: “Both the locals and regular ferry passengers were very supportive, despite the fact that we were inevitably causing delays for them.”

Clunie said that the convoy had succeeded in exposing the French government’s policy of containment of the refugees.

He said: “I think it looks terrible for the French government.

“They are attacking Labour rights and workers protections, they are coming under criticism for police tactics against football fans and protestors, using disproportionate force.

“And they’ve now prevented a huge convoy of aid reaching refugees at Calais, I think it looks terrible for them.”

The Glasgow activists left their aid with others on the convoy, who are continuing their attempt to get the desperately needed supplies to France by whatever means they can.

“We were furious that having made a 900 mile trip were weren’t able to make our donations in person,” Clunie said.

“But the whole experience was pretty heartening from the huge amount of supplies and donations we got from members of the public, and in terms of the atmosphere on the Convoy and the reception it got in both London and Dover,” he added.

Protests at Dover closed the border for two hours. After failing to pass border security, the convoy returned to London to protest at the French embassy.

Around two million refugees are thought to have come to Europe seeking safety since the beginning of 2015.

Organisers have pledged to continue their efforts in solidarity with refugees at Calais.