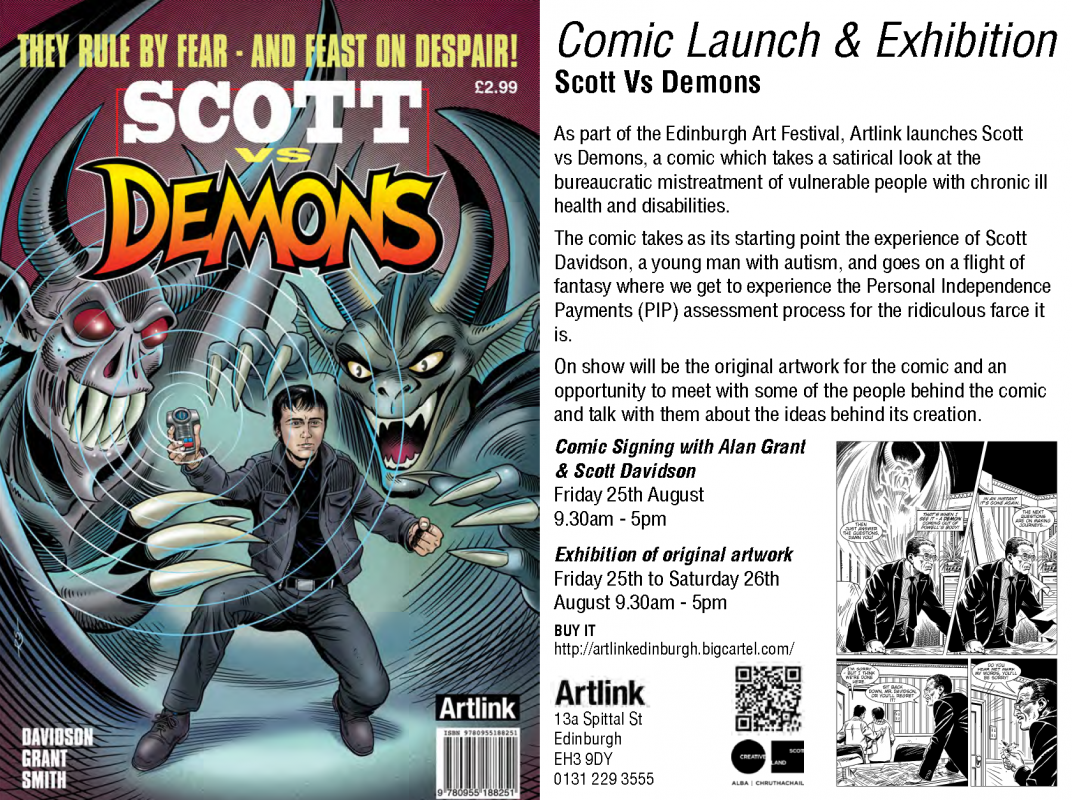 A COMIC highlighting a young man’s experience of the Personal Independent Payment (PIP) assessment process is being launched today as part of the Edinburgh Art Festival, with a signing and exhibit of original artwork.

The comic, Scott vs Demons, is the second collaboration created by comic writer Alan Grant and comic artist Robin Smith, under the direction of Scott Davidson, a young man with autism.

Artlink, a disability arts organisation in Edinburgh, where the exhibit will be displayed, first brought the trio together in 2013 to create Scott vs Zombies, which tackled the issue of bullying.

“The [PIP] form asks inhumane and embarrassing questions which put people in an awkward position to say the least”. Alison Stirling, Artlink

Alison Stirling, Creative Director at Artlink, spoke to CommonSpace about the motivation behind the latest commission. Stirling said: “It’s about the idea that bureaucracy takes over and what you’re left with is a farce.”

Through its work with people with disabilities, Artlink repeatedly came across the issue of PIP assessments. Stirling said they found that “the form asks inhumane and embarrassing questions which put people in an awkward position to say the least”.

The idea of creating a comic on the subject was a way to “take the piss out of it”, Stirling said, while raising awareness of the serious impact the process can have on people.

Alan Grant, best known for his work writing Judge Dredd in 2000AD and various Batman titles, spoke to CommonSpace about his decision to get involved in the project. Grant said: “When Alison first got in touch with me about a comic featuring Scott, I was interested immediately.”

“To base a story on a particular person would be a challenge, and the fact that Scott comes from Gorebridge, a couple of miles from where I grew up in Newtongrange, was enough to cement my interest.

“Only demons, which live off the misery of Mankind, could treat the old, the young and the disabled the way our government does”. Alan Grant

“So I met with Scott and his mum at the Lady Victoria pit, where my father worked in the 1960s, and asked him what he’d like the story to be about. He didn’t hesitate: ‘Zombies!’

“I wrote it and passed it to Scott for his approval. His only complaint was, in my story, I didn’t have a zombie biting his mum and transforming her into one of the undead. So I obliged.”

This time, when Grant was approached by Artlink for a second instalment, he “didn’t need any persuading”, and again, Davidson was the driving force behind the story. “A meet with Scott and his mum produced ‘Demons!’ this time from Scott. So demons it is.” Grant explained.

This seemed a suitable choice, Grant said, because “only demons, which live off the misery of mankind, could treat the old, the young and the disabled the way our government does. They all profess to be Christians, but not one of them practises what Christ taught. They’ve been possessed”.

“It’s about invisible people who aren’t in the public eye. If you look on TV, with stuff about benefit scroungers, people are demonised.” Alison Stirling, Artlink

Artlink’s Alison Stirling explained that, while Davidson has formed the inspiration for the comic’s story, “it’s not just about him. It’s about lots and lots of other people, many of whom are losing their payments”.

Above all, Stirling said, “it’s about invisible people who aren’t in the public eye. If you look on TV, with stuff about benefit scroungers, people are demonised”.

In this case, it’s about demons, and only a ‘rat zappa’, a device thought up by Alan Grant, can excise them from within bureaucrats.

The exhibit will be on display at Artlink in Edinburgh from 9.30am-5pm on 25 August and 26 August, with comic writer Alan Grant and Scott Davidson available for signings today.