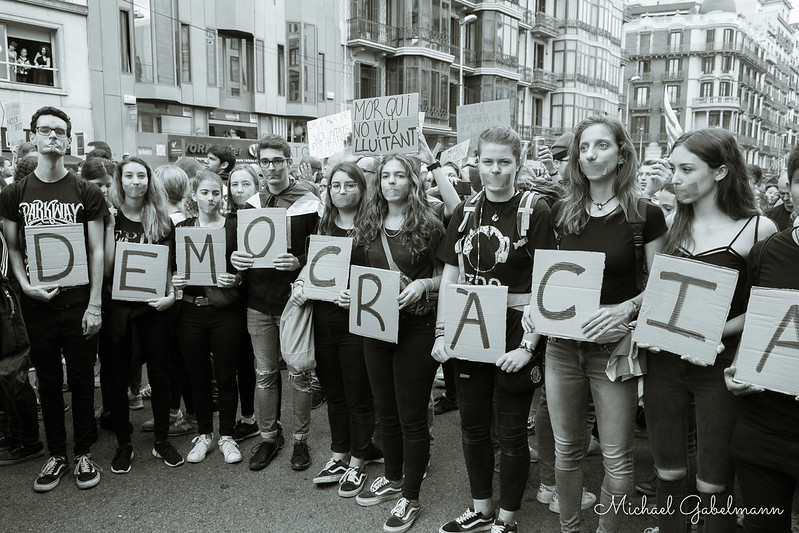 –          “Whether you are Yes, No, Leave or Remain, this protest is for anyone who supports the right to self determination,” says the Catalan Defence Committee Scotland

SCOTTISH activists will this week rally in Glasgow in solidarity with ongoing protests in Catalonia over the sentencing of nine Catalan independence leaders to imprisonment by the Spanish Supreme Court.

Last week, nine civil and political leaders were jailed for terms ranging from nine to 13 years for their role in Catalonia’s outlawed 2017 independence referendum, having been charged with sedition and misuse of public funds.

In the aftermath of the verdict, mass-protests have taken place in Catalonia, including a general strike which saw hundreds of thousands gather in the Catalan capital of Barcelona. However, violent clashes between Spanish authorities and Catalan demonstrators have led to a breakdown of communication between the Spanish and Catalan governments.

The Catalan Defence Committee Scotland, which is modelled after the committees which have helped organise and guide the Catalan independence movement, has announced that a protest demanding the release of all Catalan political prisoners will take place at noon on 26 October in Glasgow’s George Square.

READ MORE: ‘What do Catalans want?’ As protests continue, Clara Ponsati lays out demands for ending conflict in Catalonia

A statement from the Catalan Defence Committee said: “Self-determination is a fundamental civil and political right enshrined in various international law treaties to which Spain is a signatory. Those convicted are guilty of nothing more than organising a vote that was violently suppressed by the Spanish State.

“And after only 6 days of peaceful protests that were again violently attacked by police 579 people had been wounded, 4 of whom lost sight of an eye, and 60 of which are accredited journalists. Some 179 people had been detained, and 18 sent to prison.”

The protest has so far been backed by the Unison trade union, which has played a key role in arguing for the solidarity of the Scottish trade union movement. This culimated in a declaration from the Scottish Trade Union Congress (STUC) in April 2018, which called for the “immediate release and acquittal” of all Catalan political prisoners, argued that “threats to democracy in other European cities need to be resisted”, and warned against political and judicial repression becoming “normalised as a means of silencing dissent elsewhere”.

Commenting on the actions taken by Spanish authorities over the past week, Glasgow North East Labour MP Paul Sweeney drew parallels with the response of the British state to the Irish Easter Rising in 1916.

Sweeney said: “It might have been lawful, but it can be best described as a massively counterproductive act of repression.”

SNP MP for Inverclyde Ronnie Cowan, who has previously visited three of those convicted last week, also responded to the events of the past week by quoting Martin Luther King, saying: “Our lives begin to end the day we become silent about things that matter.”

Cowan has urged the UK Government to “defend democracy and denounce these prison terms”.

Both MPs will be among the speakers at Saturday’s protest.

Neil Mackay from the All Under One Banner campaign group has urged Scots “who cherish democracy, oppose repression and believe in self determination to join us on Saturday”.

The Catalan Defence Committee Scotland has appealed for unity across the Scottish constitutional divide in its efforts to send solidarity to Catalonia, saying: “This protest is to demand the release of all political prisoners and to defend democratic rights.

“Whether you are Yes, No, Leave or Remain, this protest is for anyone who supports the right to self determination, the right to vote free of violent repression, and who opposes the clampdown on dissent.”