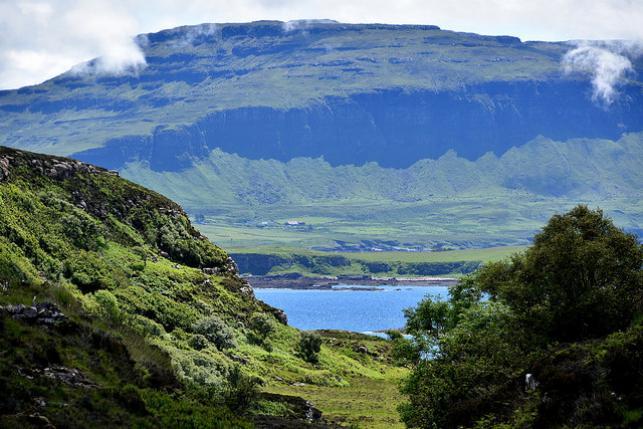 SOME of Scotland’s most prominent advocates of land reform will join together in discussion later this month, in the hopes of evaluating the current policy and practice surrounding land reform, and looking ahead to how a more equitable system might be achieved in a nation which currently has one of the most unequal distributions of land ownership in Western Europe.

The seminar ‘Social Justice, Community Land, Forestry and Energy’ on 29 April will explore how land reform can be explicitly linked with social justice, and aims to bring together land reform researchers, journalists and public representatives with community organisations and energy, labour and law academics.

Talks at the event – which is supported by the Scottish Universities Insight Institute and is dedicated to the memory of John Booth, the designer of the Isle of Eigg’s renewable energy system – will be delivered by Green MSP Andy Wightman, author and journalist Lesley Riddoch, former MSP and land reform campaigner Peter Peacock, and Community Land Scotland director Angela Williams.

The event follows the publication of a review by the Scottish Land Commission in March, which reported that radical measures – including the use of compulsory purchases or community buyouts – could be employed in cases where landowners abuse their power over Scotland’s dramatic concentration of land ownership.

The study also found that a mere 87 landowners control holdings over 1.7 million hectares of Scottish land, with some of those estates remaining under the ownership of the same family for over 400 years.

“In some parts of Scotland,” the SLC concluded, “concentrated land ownership appears to be causing significant and long-term damage to the communities affected.”

While the most recent Land Reform Act was passed in Holyrood in 2016, many of its provisions have yet to come into effect, and Scottish ministers have faced pressure from land reform advocates to hasten progress, with Andy Wightman most recently arguing in parliament that Scotland’s system of land ownership registry was severely outdated, incomplete and impractical.

Speaking to CommonSpace, event organiser, land reform researcher and lecturer at the University of Strathclyde Brian Garvey addressed the apparent divide between the rhetoric on land reform that has frequently marked Scottish politics since the advent of devolution and the current rate of progress, telling CommonSpace: “I know there’s been recent invitations for people to submit [contributions] on land reform policy, but what struck us is there’s been quite forward-looking policy at times on land reform, but in practice it’s really difficult to see any sign of a radical redistribution of land in Scotland.

“What struck us is there’s been quite forward-looking policy at times on land reform, but in practice it’s really difficult to see any sign of a radical redistribution of land in Scotland.” University of Strathclyde lecturer Brian Garvey

“As researchers, we’re interested in this, and we’re keen to know what we need to be doing better to engage with people in the political arena, with community organisations and with civil society – to push forward with a more equitable distribution of land. And also, of course, to think constructively and creatively about what alternative uses there are for this land, beyond say, commercial forestry production.”

Garvey continued: “What we’re continuing to run up against in land reform is this conflict between an aspiration of community ownership, and this right to private property that large landowners cling on to.

“Now it seems, from interpretation of [current] policies, that the absolute right to private property should not get in the way of a redistribution of land; but perhaps there’s a fear of the legal might of some of the landowners. We’re really not seeing any evidence of any radical redistribution, or a break-up of large estates where already it’s been shown the land is being used unproductively, or under monopoly control that isn’t serving anybody except those who own the land.”

Lesley Riddoch also told CommonSpace ahead of the event: “Every week a story tells us we are still living in quasi-feudal times where one man (invariably) owns land and thereby controls the life opportunities for thousands of local people – less obviously if like Anders Polvsen [Danish billionaire and landowner] he prefers re-wilding to re-peopling.

“This ancient wrong has hardly been righted, even though community land buyouts show the dramatic change that can happen when local people’s priorities are put at the top not the bottom of the agenda.

“But the solution to Scotland’s bizarre land ownership problems isn’t buying every bit of Scotland out, at great expense, acre by acre. That’s why land reform is so important and that’s what I’ll be saying at this seminar.”

“The solution to Scotland’s bizarre land ownership problems isn’t buying every bit of Scotland out, at great expense, acre by acre.” Author and journalist Lesley Riddoch

Speaking on behalf of the Common Weal think tank, which will be represented at the event by its operations manager Tiffany Kane, Common Weal head of policy and research Dr Craig Dalzell commented: “Common Weal is greatly looking forward to being part of the ongoing discussion and campaign for meaningful land reform in Scotland.

“As a nation, Scotland has some of the most unequally concentrated patterns of land ownership in Europe and the whole country suffers for it – from the ecologically and economically devastated grouse moors in the Highlands to the underdeveloped brownfield in our cities.

“This is a problem that affects all of us and so the wider this discussion spreads, the more lasting the solutions will be.”

The event will take place on 29 April, from 10am to 12.30pm, at the University of Strathclyde’s Technology and Innovation Centre. Further details can be found here.